A major mobile network bug has forced Samsung to halt the latest Oreo beta update for the Galaxy S8 and S8+ on a couple of US carriers.
Published 15 November 2017, 06:08 EST

Even though it wasn’t quite as fast as Huawei, OnePlus or HMD Global in opening a public Oreo beta program for the Galaxy S8 and S8+, Samsung quickly rolled out a couple of (unstable) updates for testers, sparking hope of a relatively timely conclusion and progress to an official OTA Android 8.0 delivery.

Unfortunately, while bugs are obviously part of the preview deal for any software makeover, an especially critical issue seems to have plagued enough US users that the second beta build rollout is officially halted until further notice.

Way too many of those who installed the latest experimental update saw their phone apps suddenly crash and burn, losing cellular signal and, of course, access to their mobile networks.

The glitch mainly affected Sprint and T-Mobile subscribers, including folks who purchased an unlocked Galaxy S8 or S8+, then choosing to activate the handset on their preferred wireless operator. 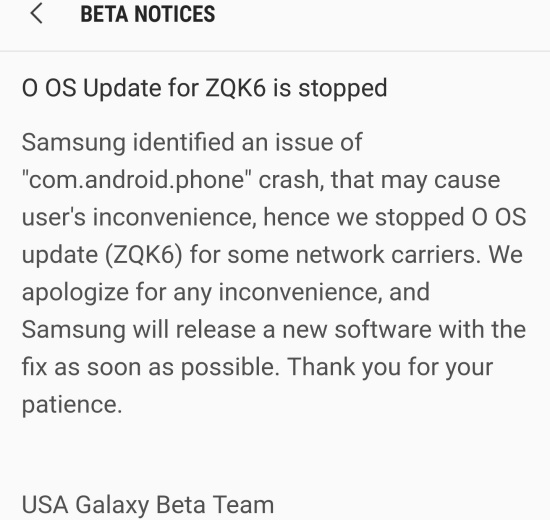 Some people managed to find workarounds and temporary solutions, but clearly, Samsung needs to release a proper, universal fix “as soon as possible”, which the device manufacturer has already promised to do.

In the meantime, consider this a friendly, necessary reminder to never run unfinished software on a daily driver, and routinely back up your data to keep it safe from unexpected OS downgrades. Unfortunately, it’s also starting to seem like Oreo goodies for the Galaxy S8 and S8+ will be needing quite a bit of extra stabilization time.