Is there more to the Samsung Galaxy S8 Active than the abundance of inside information, high-quality photos and hands-on video recently leaked on the interwebs? Well, we still don’t know if the extra-robust flagship Android phone is headed for more carriers and markets than just America’s AT&T, for instance.

Compared to last year’s GS7 Active, and the S6 Active before it, this bad boy seems to lack any sort of logos aside from “Samsung” and “Galaxy S8 Active” labels on its back, both in real-life imagery and press-friendly renders.

A wider launch than usual is therefore a strong possibility, only made stronger by references to Bixby “service ability” variation “by country” in freshly disclosed employee training material. 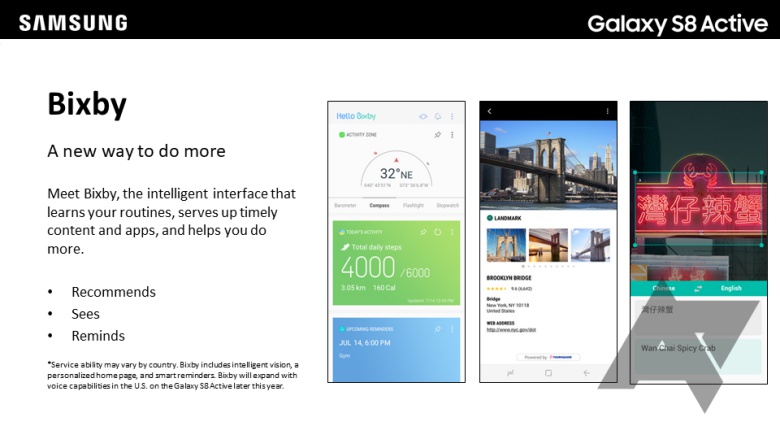 The same extensive manual that already had a few pages divulged online also confirms the “military-grade body and durable metal frame” of the Samsung Galaxy S8 Active. Extreme temperatures, dust, shock/vibration, low pressure and high altitude conditions shouldn’t be a problem for this “shatter-resistant” handset, which obviously “can handle a splash” in up to five feet of water for up to 30 minutes as well.

A multitude of new renders leaked by Android Police and Evan Blass further shine the light on a flat “Infinity” screen with slightly thicker bezels than those of the standard GS8, no front buttons and no “Active” key whatsoever, just side-mounted controls for power, volume and Bixby assistance.

The rugged “case” on top of the flat-screened Galaxy S8 is apparently screwed in, which could mean you’ll be able to remove and replace it with relative ease. The main specs and features are no mystery, including a 4000mAh battery, Snapdragon 835 processor and 4GB RAM, with a formal announcement finally taking place tomorrow, August 1, according to certain sources.