Most of the Samsung Galaxy S8 Active specs revealed in a new benchmark are exactly what we expected. But that “Infinity Display” is quite bizarre.
Published 23 June 2017, 06:59 EDT

There hasn’t been this much buzz around a new Galaxy S Active-series release since the days of Samsung’s first water-resistant flagship phone back in 2013. These days, of course, the company’s “standard” heroes are also protected against immersion up to an IP68 level, so that’s not what we’re looking forward to in the impending GS8 Active.

Almost certainly carrying model number SM-G892A, and headed exclusively for AT&T stateside, this should be the first of its kind to ditch front-mounted physical buttons.

Equally exciting for some, the Galaxy S8 Active is expected to sport a flat “Infinity Display”, unlike the S8 and S8+, but similar to the LG G6. What we didn’t know until today were the screen size, resolution and aspect ratio, though we obviously anticipated regular GS8-comparable numbers. 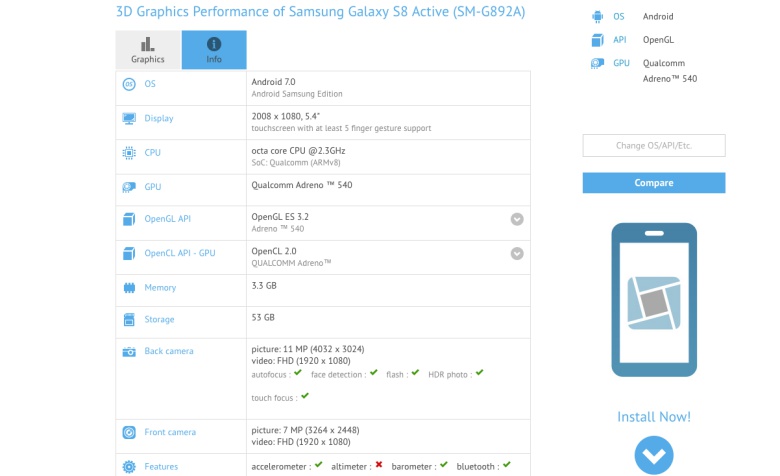 That’s not exactly what GFXBench records allude to, with a pre-launch graphics test conducted earlier today producing some head-scratching display specs. We’re talking 2008 x 1080 pixels, or an unusual aspect ratio of 16.7:9. That latter number is not so different from the 16:9 of last year’s S7 Active, but what’s up with the resolution downgrade from 2560 x 1440?

We’re honestly hoping this is all some sort of a mix-up, especially with display size listed as 5.4 inches, since benchmarks can occasionally report inaccurate data. Everything else checks out though, including a Snapdragon 835 processor, 4GB RAM, 64GB internal storage, 12MP rear camera, 8MP selfie shooter and Android 7.0 Nougat software, i.e. the same exact features as the S8 and S8+.