While it’s too early to tell how the Samsung Galaxy S7 performs in real life, synthetic benchmarks show the Exynos variant lagging behind the Snapdragon.

If there was one good thing that came out of the Snapdragon 810 overheating debacle last year, it was the global consistency of the Galaxy S6 and S6 Edge. For the first time in half a decade, a flagship Samsung smartphone was created equal for all its buyers, eliminating the possibility of region envy.

But now, Qualcomm is decidedly back in business, and a new “Chipgate” scandal may soon erupt. According to benchmarking authority AnTuTu, the Snapdragon 820 and Exynos 8890 SoCs are quite close when it comes to CPU performance, yet worlds apart in GPU muscle.

Before going any further, let us underline we fully realize how deceiving these kinds of “synthetic” tests can get. AnTuTu in particular has been rigged more than once in the past, and even if we trust it to deliver authentic scores, they often have little in common with how a device actually performs in real-life conditions.

That said, we can’t just overlook a 17,500 points difference in AnTuTu V6.0 GPU performance calculations. Those are made using unnamed reference products, mind you, but a reputable Forbes contributor and reviewer confirms the massive gap as far as commercial Galaxy S7 units are concerned. 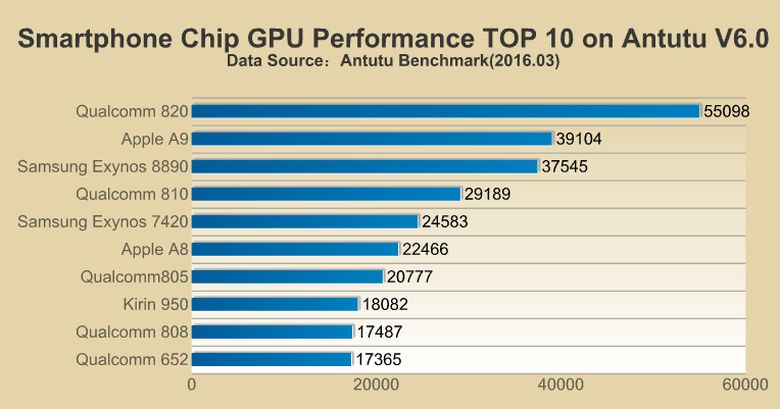 Gordon Kelly claims the S7 may have “a serious performance problem”, and while he highlights the Exynos 8890 chip is still extremely fast… today, we can all imagine a world where Android gaming greatly progresses, and this lag starts to make its presence felt.

At the end of the day, some buyers of the Exynos models might simply want the bragging rights of their Snapdragon-owning correspondents, with others not finding the two’s geographical split fair. For our part, we’ll be sure to rigorously evaluate the different Samsung Galaxy S7 and S7 Edge variants, and let you know if there’s indeed a “serious” problem to report.

Toda’s deals include the Samsung Galaxy Tab S6, the Google Pixel Slate and Amazon’s Fire HD 8 for anyone who’s looking for a new tablet