At least one Samsung Galaxy S7 model could measure 5.7 inches in diagonal, according to a fresh rumor, and sport an oddly mediocre-sounding 12MP rear cam.

Remember when the points at issue leading up to a major Samsung Galaxy product announcement concerned things like build materials, screen resolution, and RAM count? Those were the days. Now, it’s all about how many flagship models are coming, which of them might be curved, and exactly what do they measure in diagonal.

Of the countless theories floating around the interwebs lately, possibly the most plausible calls for 5.2 and 5.5 or 5.7-inch variants with both flat and dual-edge panels. To avoid sales cannibalization and market flooding, Samsung may trim down the four GS7 flavors to just two, one small and non-curved, and the other largely similar to the S6 Edge Plus.

This Samsung Galaxy S7 Edge or S7 Edge+ version probably showed its face to a Reddit leaker in early prototype form, with its hardware info screen pictured and, frankly, looking a little on the underwhelming side.

The 5.7-inch display sports the same Quad HD (2,560 x 1,440 pixels) resolution as its predecessors, but that’s not really the disappointing part, since pretty much all smartphone OEMs besides Sony seem to agree 4K is overkill. 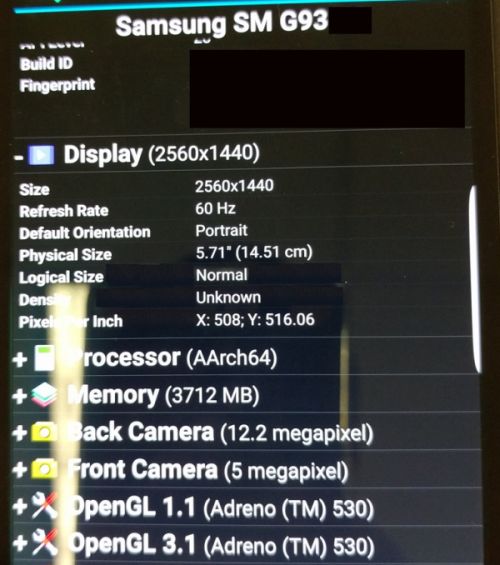 The problems are the 12 and 5MP cameras, the former of which is bizarrely downgraded from the Galaxy S6, and the latter inferior on paper to the 8 megapixel selfie shooter on the A9 (2016). Of course, a higher MP tally doesn’t always make for better photography, so let’s wait and see exactly what upgrades Sammy has in store.

A Snapdragon 820 processor is a near-guarantee as an Exynos 8890 alternate, and so are 4 gigs of RAM, despite technically there being a possibility for a jump to 6GB. Like 4K resolution though, it’s deemed an unnecessary gimmick.