There might still be a “small” 5.1-inch Samsung Galaxy S7 Edge model in the pipeline after all, fitted with 4GB RAM, and 12 and 5MP cameras.

As if the Samsung Galaxy S7 rumor storm of late didn’t leave enough question marks and uncertainty behind, a purported new SM-G935A benchmark further complicates the size and variation affairs.

If there are indeed only two main GS7 configurations in the pipeline, they might both sport 5.1-inch displays, just like the S6 and S6 Edge before them. SM-G935A, mind you, is a model number clearly following in the heels of the SM-G925A and SM-G928A, aka S6 Edge and S6 Edge+, most definitely heading for AT&T with a curved screen.

Preliminary AnTuTu data shows this isn’t as massive as previously expected, unless Sammy plans to make a big last-minute change or the benchmark visit is really old. That latter theory doesn’t hold up, given the Galaxy S7 Edge prototype runs Android 6.0 Marshmallow, and the supposed 12MP camera onboard also lines up with recent rumors. 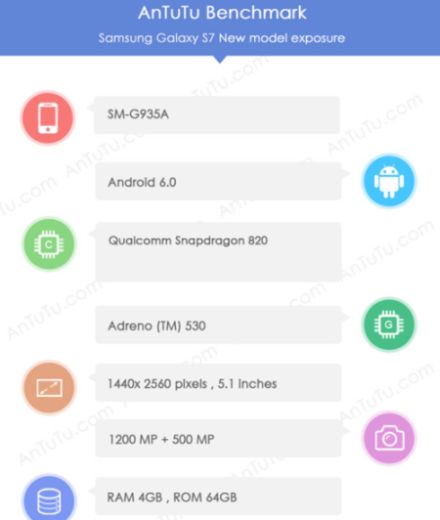 Where does this all leave us on the question of Galaxy S7 versions? With at least three of them, we presume, including a “Plus” sizing up at 5.5 or 5.7 inches. Sounds like a plan? Then don’t fret about the modest-sounding photography machine either, as it’s probably built to protrude less than its predecessors, and features wider aperture for superior low-light performance.

Source: Nowhere Else
Via: Sam Mobile