Whether you think it’s necessary or not, an extra-rugged Samsung Galaxy S7 Active is almost certainly in the pipeline.

When evidence first cropped up of an in-development new Samsung Active phone, we couldn’t help but consider the possibility this wasn’t actually an extra-rugged variant of the Galaxy S7. After all, the GS7 offers water and dust protection as standard, and the SM-G891A model number didn’t seem to fit the designation of an S7 Active anyway.

Are we looking at an S6 Active Plus then? Probably not, based on information supplied directly and most likely unintentionally by the handheld’s manufacturers. These appear to have just updated the support list of the Level app in the Play Store, and in addition to the usual suspects, a Samsung Galaxy S7 Active is also included.

Nobody’s saying this bad boy and the SM-G891A are one and the same, but if you think about it, an S7 Active isn’t as illogical as it sounds. If you recall the GS5 and S5 Active, there wasn’t any difference between the two as far as water resistance was concerned either. Yet the latter added military certifications for a bunch of other stuff in the equation, including salt, humidity, vibration, solar radiation, transport and thermal shock. 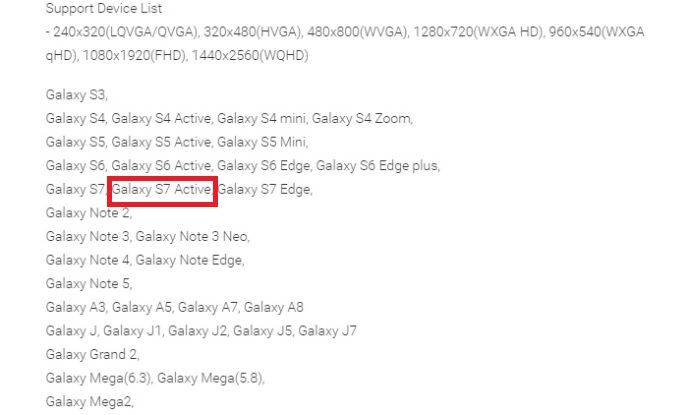 More importantly, the Galaxy S5 Active was largely impervious to drops and contacts with hard surfaces, which the S7 may also need, judging from early torture tests. Now, we’re not saying the new flagship is very fragile, but like most excessively glass-using devices, it’ll definitely crack if dropped on concrete or tile. Hopefully, that won’t be a problem with the looming Galaxy S7 Active.