The question is not if the Samsung Galaxy S7 Active is real, but when will it see daylight on AT&T and exactly how large and powerful is it?
Published 10 May 2016, 09:21 EDT

Perhaps fearing its outdoors-loving fans will not feel compelled to go the Galaxy S7 Active route if the ruggedized phone simply bulks up the exterior of the standard flagship model while replicating all its features to the letter, Samsung apparently has at least one other major change in the pipeline.

Namely, GFX Bench shows, the SM-G891A is set to measure 5.5 inches in display diagonal, up from 5.1 on the S7, S6 and S6 Active. Now that we think about it, the muscular new powerhouse did strike us as unusually imposing in a first round of leaked live pics, though it was obviously impossible to gauge its exact physical dimensions.

But in addition to offering extra Quad HD screen real estate, the Samsung Galaxy S7 Active could be able to pack a much larger battery than its non-shock-proof sibling without gaining a lot of weight.

Last year, the 5.1-inch GS6 Active housed what then felt like a massive 3,500 mAh cell, whereas the S6 settled for a sub-par 2,550 mAh juicer with an identical panel in tow, but significantly slimmer profile and 32 grams less. 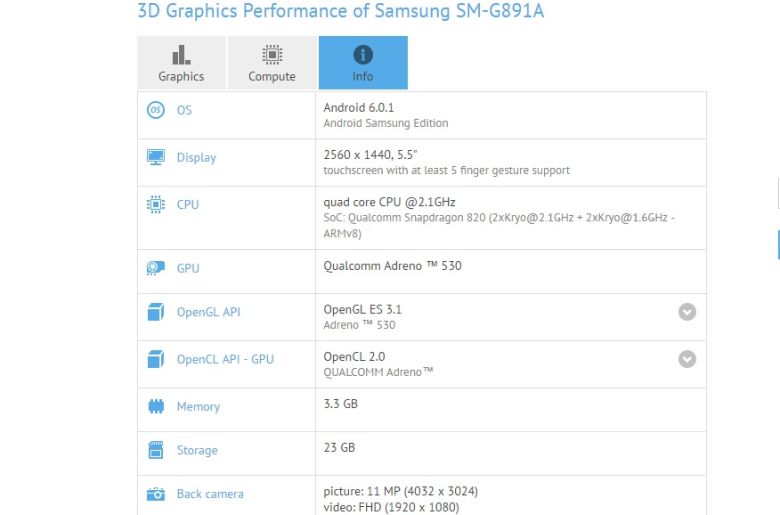 This time around, we can probably realistically expect the jumbo-sized S7 Active to measure roughly 8 mm in thickness, tip the scales at 170 grams or so, and haul a battery very close to the 4,000 mAh capacity mark.

With 4GB RAM, 32GB internal storage (hopefully, expandable via microSD), a quad-core Snapdragon 820 processor, as well as 12 and 5MP cameras confirmed by this pre-release graphics benchmarking visit, the Galaxy S7 Active almost looks too good on paper to be… an AT&T exclusive. Say it isn’t so, Samsung.

It seems that the Samsung Galaxy Note 20 and the Galaxy Fold 2 may launch in August, under a different format because of the ongoing pandemic