Find out how the image quality compares between two new high-end flagship Android phones: the Samsung Galaxy S6 and the HTC one M9.

The two hot new Android flagship phones out right now are the Samsung Galaxy S6 and the HTC One M9. We’ve already done some other comparisons between the two flagships, but one of the biggest differentiating factors among smartphones these days is their camera quality. So that’s what we’re going to take a closer look at here. Both Samsung and HTC have updated the cameras on their latest flagship smartphones and they’ve got some key differences. The HTC One M9 has a 20 megapixel sensor with an f2.2 aperture while the Samsung Galaxy S6 has a 16 megapixel sensor with an f1.9 aperture. The wider aperture ratio of the Galaxy S6 should bring in more light (which is important in those dark evening outings), but it also has optical image stabilization which HTC lacks.

Below we’ve compiled a few close-up comparisons between photos taken by both the Samsung Galaxy S6 on the left and the HTC One M9 on the right. 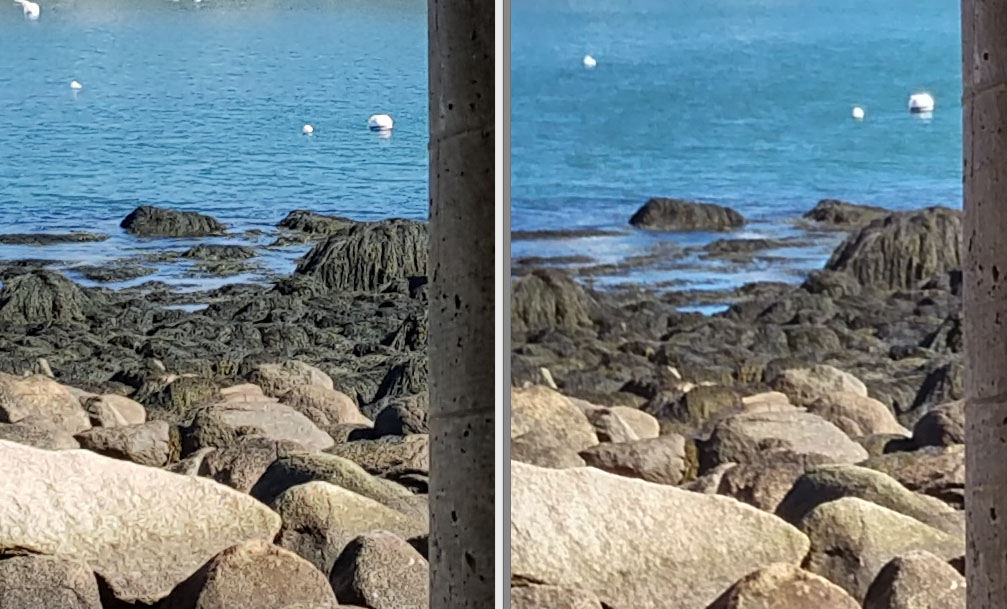 This first example is showing off the high dynamic range mode in both cameras. The Galaxy S6 on the left looks a little too post-processed. It looks like a Photoshop “plastic wrap” filter was applied. On the other hand the HTC One M9 looks a bit blurry. 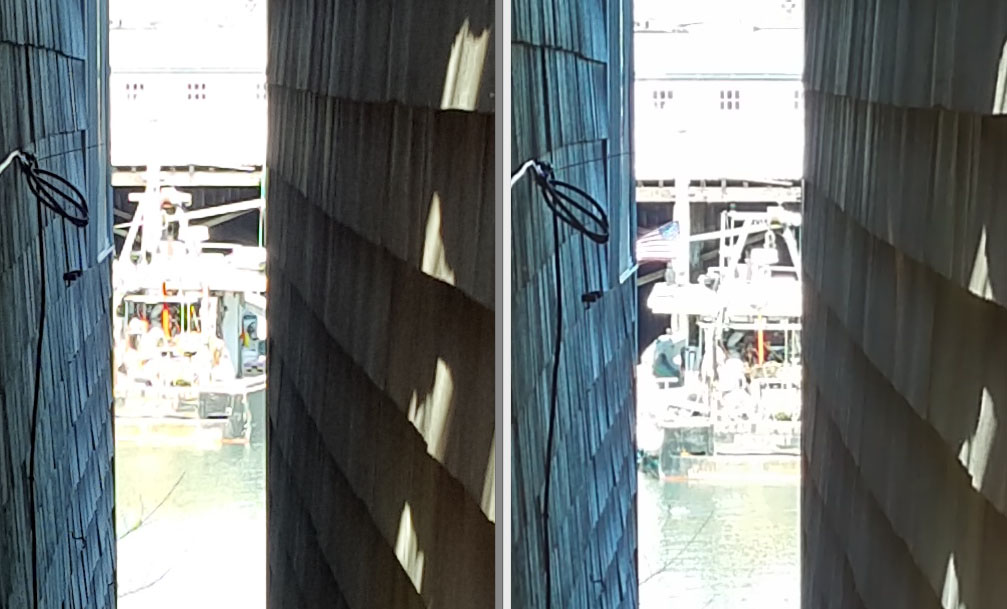 Another HDR example. Here we actually get more detail in the HTC One M9 image. There’s less contrast, but you can see the ripples in the water and the texture on the shingles more clearly. Still in both examples, the dynamic range is not high enough as clearly the highlight areas are completely washed out. 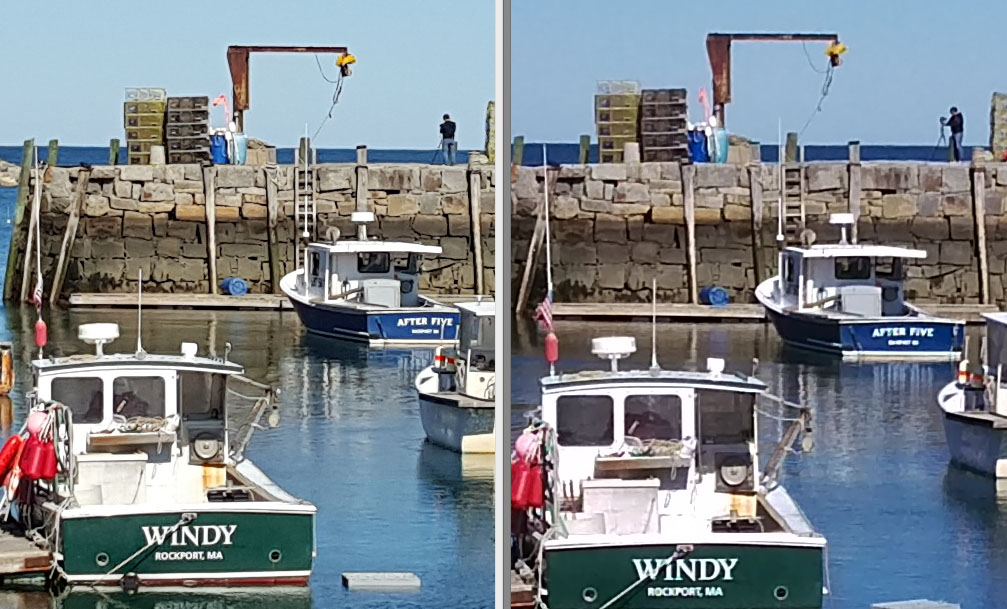 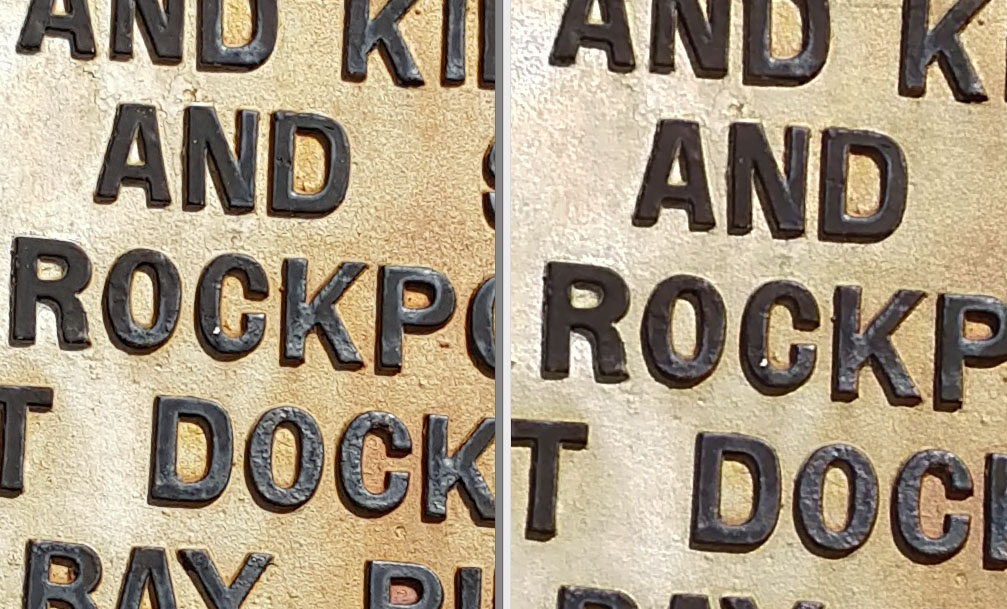 While the HTC One M9 has more pixels, the Samsung Galaxy S6 on the left seems to have a sharper lens. You can also see a difference in the saturation and tones between the two. 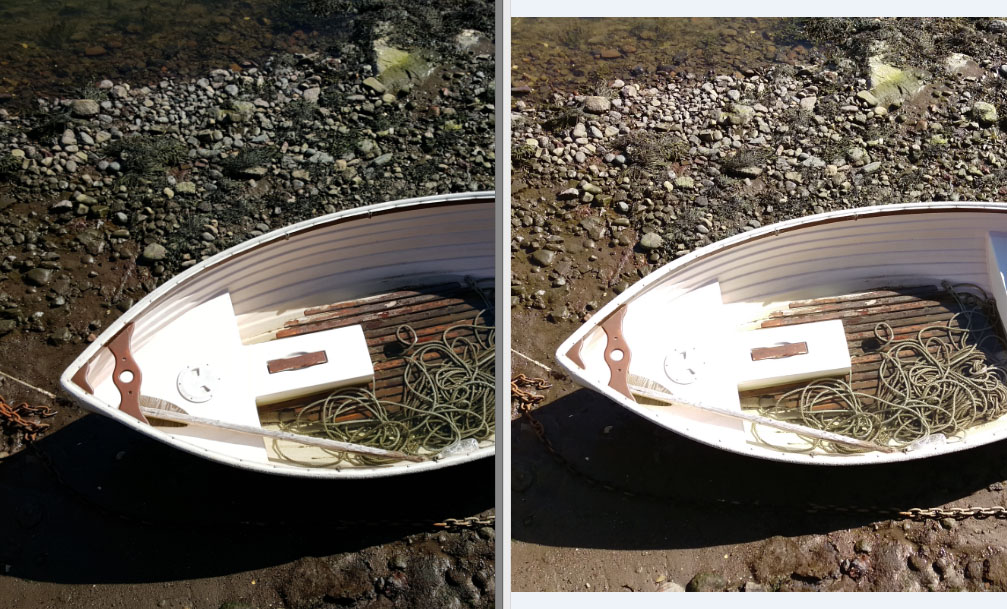 In this boat scene, the Galaxy S6 has darker shadows but more detail in the highlights. It’s especially noticeable on the inside edge of the boat where the lines are still visible, but the HTC One M9 blends completely to white. On the other hand, the HTC shows more detail in the shadows… you can still see the details of some stones in the shadow of the boat where as the Galaxy S6 makes them completely invisible. 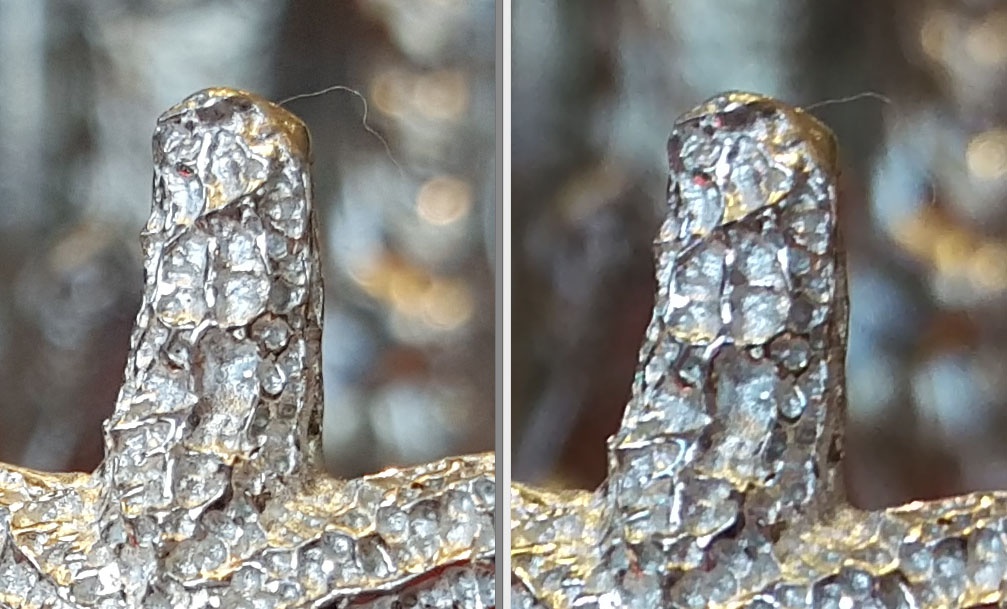 When it comes to macro close-up photos, both do pretty well, but the Galaxy S6’s higher quality lens shows here. The tiny hair at the top of this silver star is clearly sharper and more-defined in the Galaxy S6’s shot. The blurry bokeh in the background is smoother and has less noise as well. 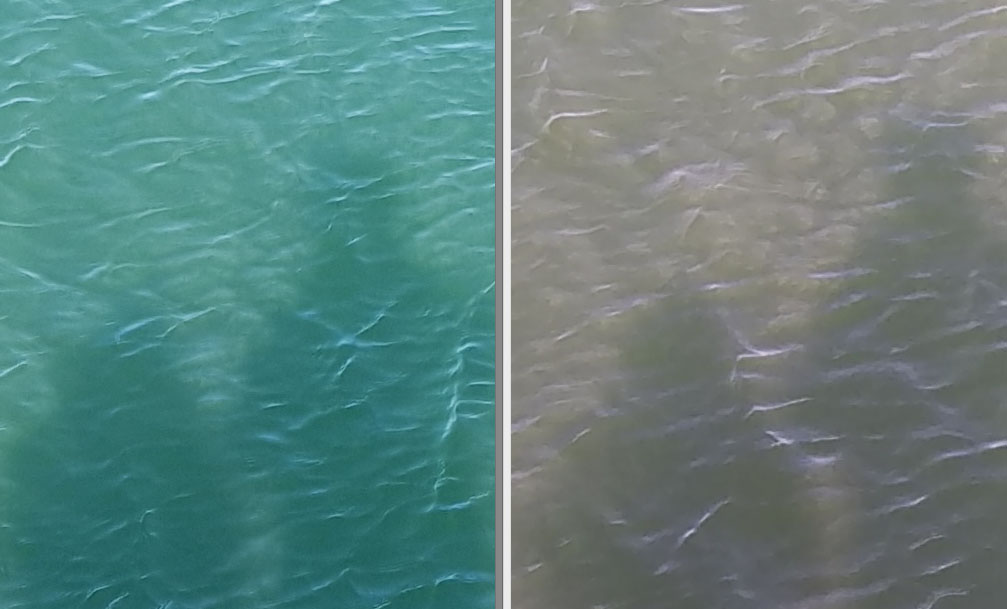 Here’s a drastic example of color difference between the two. The Samsung Galaxy S6 on the left shows a lot more blue in the water, which is closer to how Micheal Fisher remembers it in real life. The HTC One M9 makes the blue water practically gray. 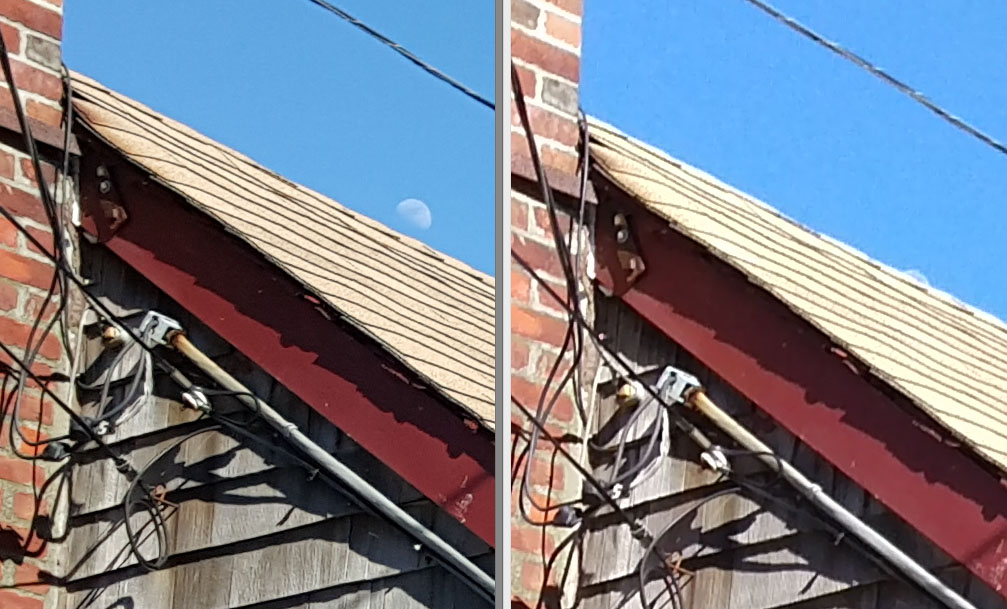 In this rooftop example, while there’s plenty of light for both sensors, take a closer look at the wires, especially the one against the blue sky. The Samsung Galaxy S6 on the left has clear smooth lines while the HTC One M9 is still filled with noise. Even the blue sky has splotchy color variations in HTC’s sensor. 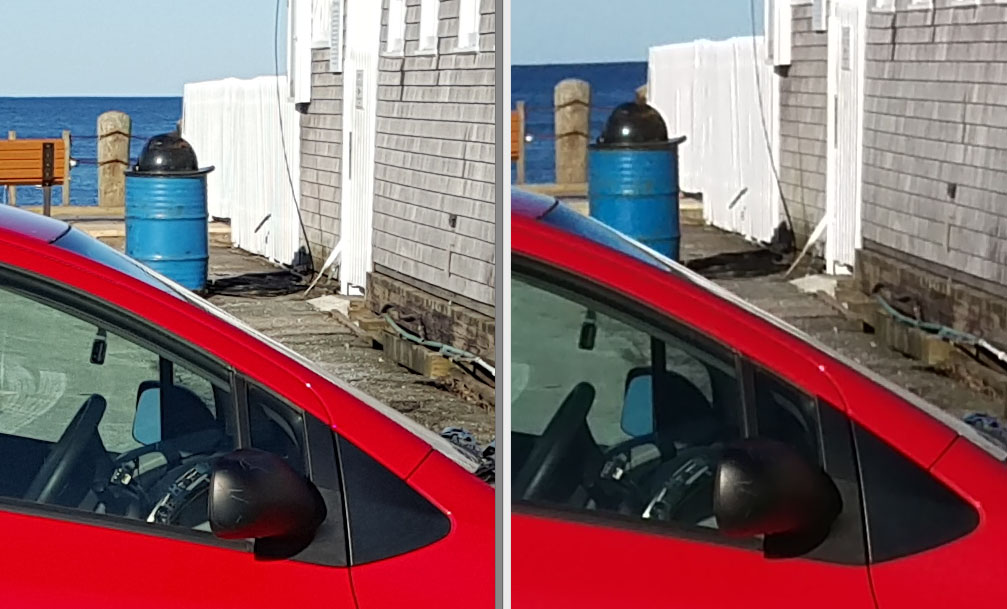 While in the boat shot above the HTC One M9’s exposure tended towards being overexposed (revealing more shadow information and less highlight detail), but in this example the HTC One M9 is more on the underexposed side. You can see the shadows are a bit darker and there is more detail in the white door on the right, while the Samsung Galaxy S6’s sample on the left washes out the highlight details in the same door. 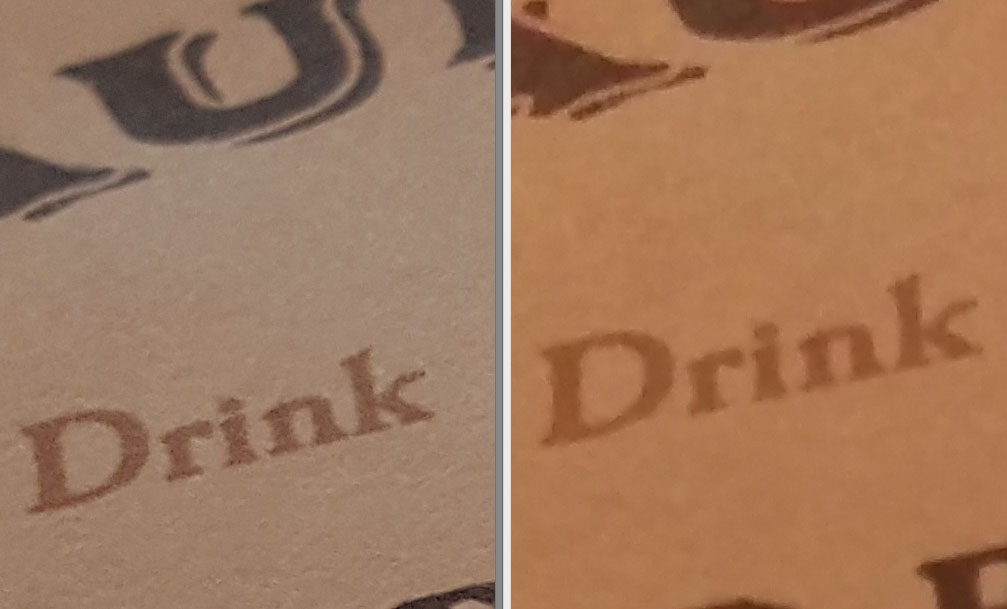 When the lights go out and these camera sensors have to crank up their light sensitivity to get any kind of image, the Samsung Galaxy S6 remains superior. Again, you can see the HTC One M9 still has more pixels on the right, but its noise levels and lens quality make the details degrade significantly. The color reproduction isn’t so great either. 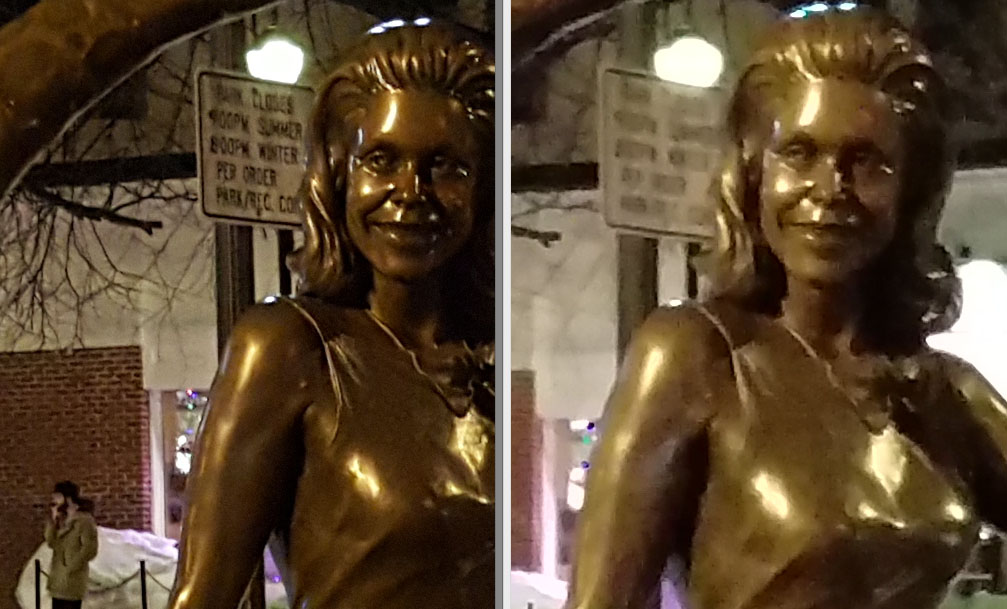 Again, the HTC One M9 on the right gets huge amounts of clumpy noise in low-light photos. The tree branches in the background disappear and the sign is completely unreadable. Samsung’s optical image stabilization helps a lot here too. The Galaxy S6 can absorb more light into its sensor while stabilizing the lens to maintain a sharper image with less noise. 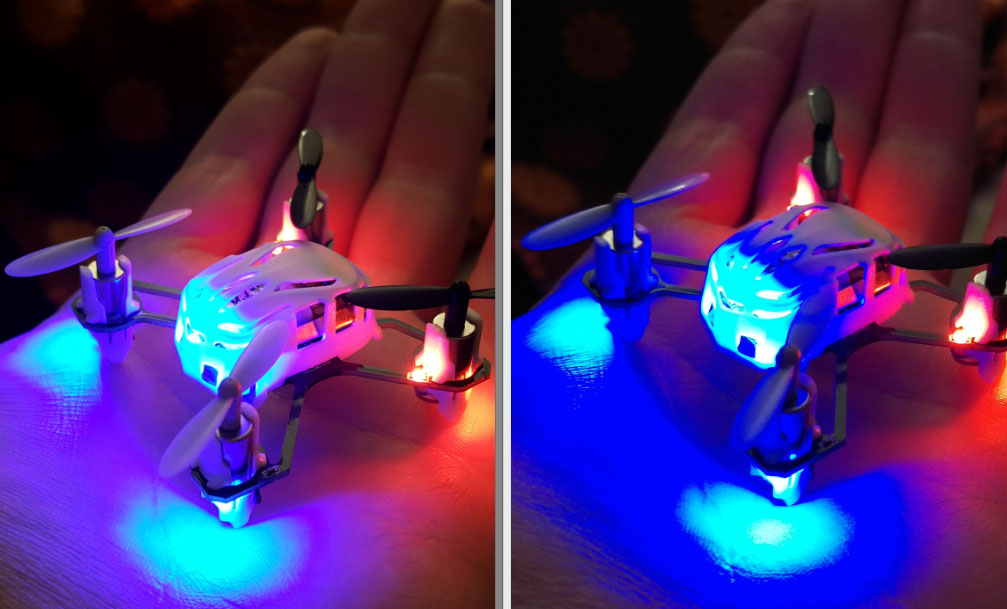 In this example, Samsung’s superior image sensor shines again. You can see some banding between colors in the HTC One M9’s image on the right… the differences between the colored lights of this toy tend to have hard edges instead of a gradual blend like they should. You can also see a difference in the way the colors are rendered. Samsung’s shows more purple, while the HTC One M9 goes with more blue.

While both of these Android flagships are great devices and the HTC One M9 has the megapixels spec advantage, it looks like the Samsung Galaxy S6 has the superior image quality. Take a look at the full resolution samples posted here for yourself and let us know in the comments below which one you think is best.

Be sure to check out our other coverage of the Samsung Galaxy S6 and the HTC One M9
Michael Fisher contributed to this camera shootout.

The foldable phone will be sold through Flipkart.