Samsung’s best smartphone in years has a curvy companion. Find out how much difference a little bend can make in our Galaxy S6 edge review!
Published 20 April 2015, 16:45 EDT

It’s such a small and subtle variation on the standard Galaxy S6 that Samsung didn’t even decide to capitalize its brand name. But don’t be fooled by the understatement: as we discovered on other bold devices from our recent history, it’s amazing what a little curve can do.

Editor’s Note: This companion text piece to our Galaxy S6 edge review video covers only those areas in which the edge differs from the standard S6. As such, it’s shorter and less elaborate than our standard review format. For the full deep dive on Samsung’s 2015 flagship, see our in-depth Samsung Galaxy S6 review!

Also, this review was made possible by a device loan from dbrand, providing custom Galaxy S6 edge skins like the one seen in the video below. Thanks to dbrand for their support! 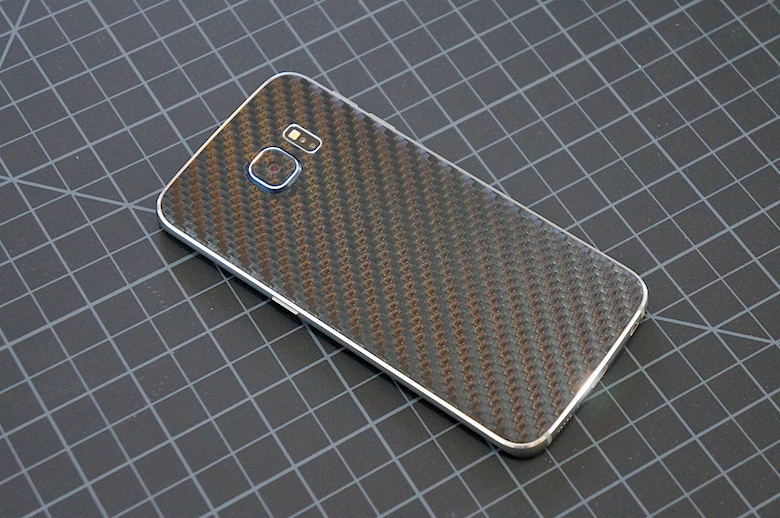 If you can’t immediately tell the difference between the S6 and S6 edge from a distance, that’s understandable. (They’re so similar that we’ve even used video of the two interchangeably in our Samsung coverage since MWC 2015.) But just as you won’t fully understand the standard S6 until you pick it up, it also takes holding the S6 edge to really “get” it.

Unlike the asymmetric Galaxy Note Edge which preceded it, I didn’t find the S6 edge awkward to hold; there’s enough purchase on the side rails and the side buttons are placed intelligently enough that dropping it isn’t as likely as it may seem. Still, the Gorilla Glass 4 back cover is just as slippery (and smudgy) as on the standard S6, so if you’re worried about fingerprints or scratching but don’t want to ruin the aesthetics with a case, consider a Galaxy S6 edge skin like the one on our review device. 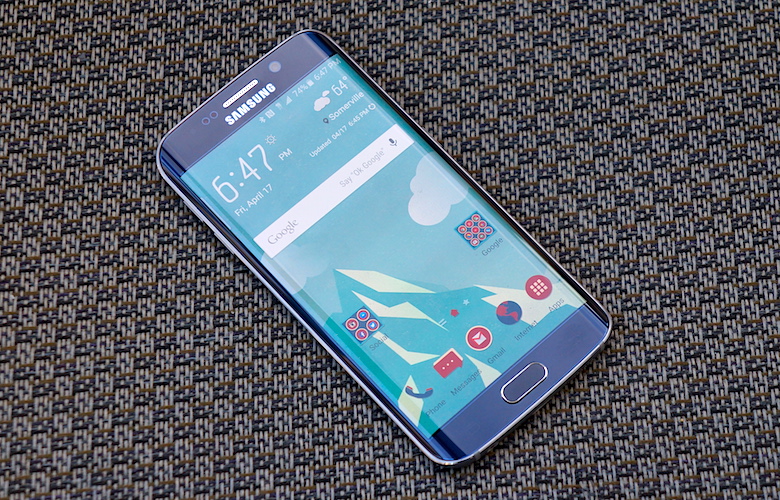 It took 800-degree temperatures in an expensive process called “3D thermal forming” to impart the curve to the cover glass that gives the Galaxy S6 edge its name, and the effect is gorgeous. Even as a largely cosmetic play, the design is delightful, lending the display an infinity-pool effect when viewed from the sides and making the device quite striking from almost any angle. The AMOLED panel lying underneath curves only slightly, reaching not even halfway as far as the cover glass does, so there’s surprisingly little danger of accidental taps when picking it up from a table. And the screen itself is just as brilliant, saturated, and pixel-packed as its counterpart on the standard S6, capable of adapting to almost any lighting condition you’re likely to find yourself in.

In use, the screen’s curve does have minor drawbacks. Light behaves differently as it interacts with the edge, so both reflected light from the outside environment and pixel illumination from within produce distortion and color deviance at the sides of the screen. The software isn’t fully optimized for the bend, either: edges of words sometimes bleed off the sides of the browser on certain webpages; the game board in Words With Friends is bent at the sides; stuff like that. On the other hand, scrolling webpages or social streams is a little easier with the added purchase of the side screen, in that your thumb doesn’t obscure the text as you surf. It’s a bit like a modern jog dial in a way, which is nice. 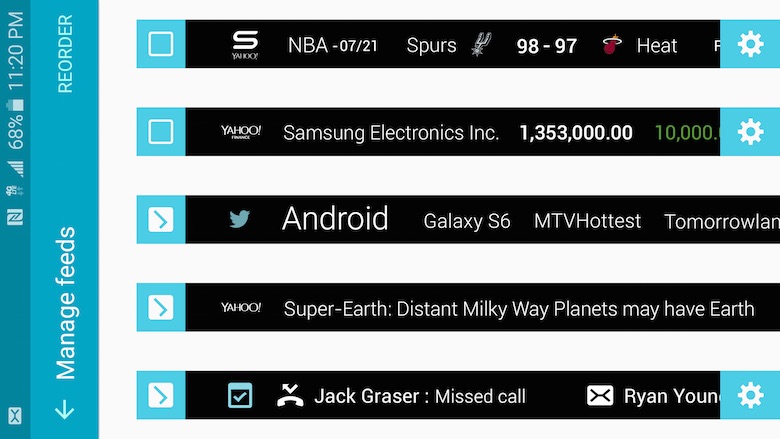 Of course there’s custom software built to take more advantage of the side screen … but on the whole, it’s more fluff than feature. During our first hands-on with the Galaxy S6 edge, we touched briefly on the People Edge function that lets you assign commonly-called contacts to a persistent dock that slides out from the side of the screen – and it turns out a brief look is really all that’s needed. It’s cool, but it’s also not much faster than finding your contacts the old-fashioned way (especially when you take into account the wasted time from missed swipes; the default location for the slide-out tab is on the hard-to-reach upper half of the display). Then there’s the color-coded caller-ID that flashes custom colors along the edges when one of those important people is trying to reach you. Again, it’s cool … but in order to work, it requires you to put your expensive new phone face-down on the table. No matter how strong Gorilla Glass 4 is, that still feels five different kinds of wrong.

Leaving your phone right-side-up exposes you to other, more useful features of the edge display. The Information Stream is probably the best of these: it can be set to deliver news headlines, trending Twitter searches, stock prices and notifications while the rest of the display remains black (except in the Alarm Clock mode, which illuminates the whole panel in a diffuse blue glow for some reason). But the Information Stream isn’t as helpful as it could be. Summoning it requires an awkward to-and-fro swipe on the cover glass that only works intermittently. Rather than continuously scrolling full news headlines like a sidewalk billboard, the news ticker pauses every few seconds to show you only a partial headline; you need to tap on it and then unlock the phone to see what it’s actually about. And if you’re in a bright room, the glare on the curved glass usually falls right across the very words you’re trying to read. I appreciate Samsung trying to make intelligent use of the edges here, but these features fit better on the Note Edge, whose larger display better lends itself to this kind of information overload. Here on the S6, the edge screen is more effective as an aesthetic adornment than anything else.

Otherwise, this phone feels just like the standard S6. On the down side, that means too-frequent app crashes and intermittent responsiveness problems if you’re running one of Samsung’s new custom themes, most of which seem to carry varying degrees of lag along with them. On the brighter side, it means blazing-fast performance if you stick to the default theme, as well as new and useful touches like simplified quick toggles, a streamlined settings menu and the excellent fingerprint scanner built into the home key. 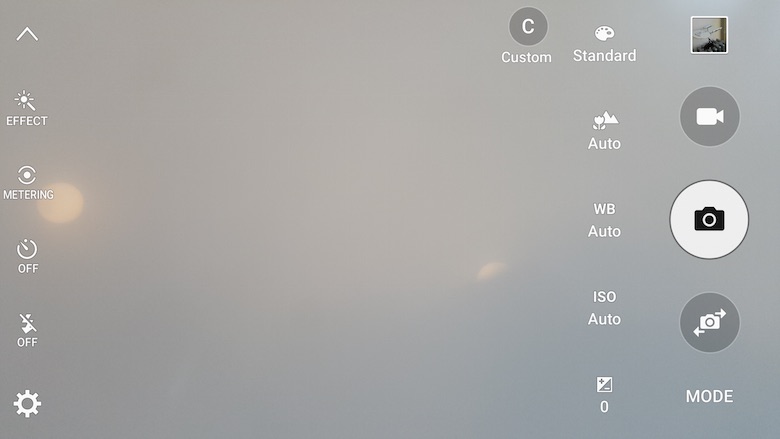 Double click that home key and you’ll find the same minimal camera viewfinder as on the S6, and it’s driving the same optically stabilized 16MP hardware too. Colors are saturated but not too overdone; contrast and sharpness lend a little more punch to most photos; and HDR jumps in when needed to rescue highlights from the shadows. The wide f/1.9 aperture helps get focus and preserve detail in low light, and the front facing camera’s wide angle lens makes for a group-friendly shooter if you don’t want to use the rear-camera selfie mode. Like its conventional cousin’s, the S6 edge’s camera is one of the best you can buy on a smartphone. 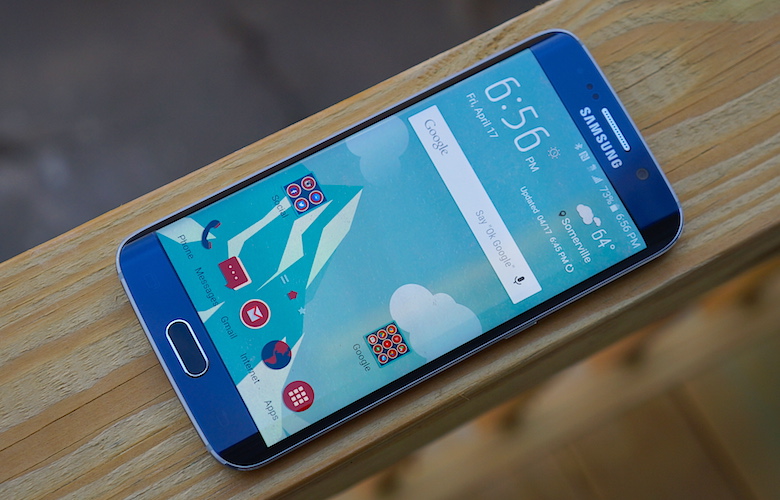 Also like the S6, the S6 edge probably won’t last you a full day if you take a lot of pictures (or, really, do anything that keeps the screen on for an extended period). At this point, I’ve been through three T-Mobile units, gotten feedback from a colleague on Verizon, and seen enough other reviews to say that the S6 and S6 edge have fair endurance at best. Keeping your Samsung Push Service updated helps, disabling WiFi Calling on T-Mobile units may help, and keeping an eye on what apps are running in the background is always a good idea … but despite taking all these steps I’ve never been able to get much more than three hours of screen-on time between charges. Frankly, that’s unacceptable. Yes, it charges incredibly quickly with the Adaptive Charger in the box, and the wireless charging is very convenient if you or your favorite coffee shop use Qi or PMA chargers, but Samsung is the company that came up with the name “wall-huggers” to make fun of people who couldn’t last the whole day on their phone batteries. And if you’re like me, you probably won’t last the whole day on the S6 edge. If you’re a desk jockey with a wireless charging pad next to your computer, you’ll be fine; if you need a long-lasting smartphone for the road, this isn’t it. 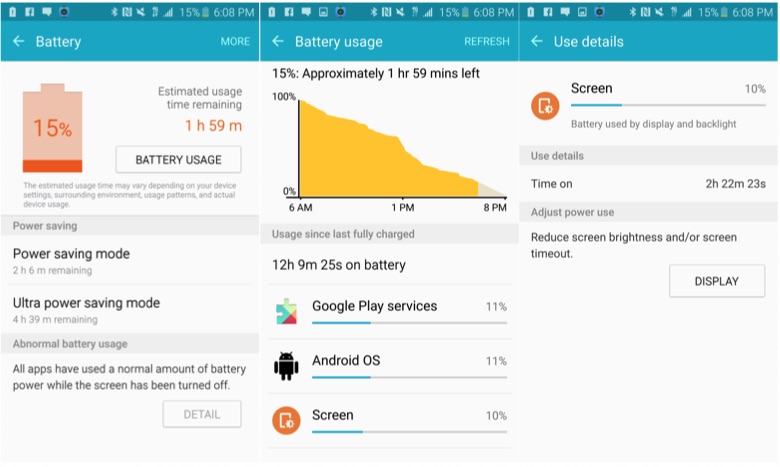 Fortunately for Samsung, the S6 edge measures up beautifully in other areas. Voice calls are comfortable and clear; gaming is no problem; web surfing is slick and smooth on the stock Internet browser, S Health is as capable as ever for monitoring your fitness efforts, and the phone packs all the hardware you’ll need for wireless transactions anywhere magnetic card readers exist, once Samsung Pay goes live. And while you can use the in-box earbuds for gaming or jamming to your favorite tunes, the bottom-mounted speaker does a good job of that too … as long as you don’t accidentally block it with a finger. 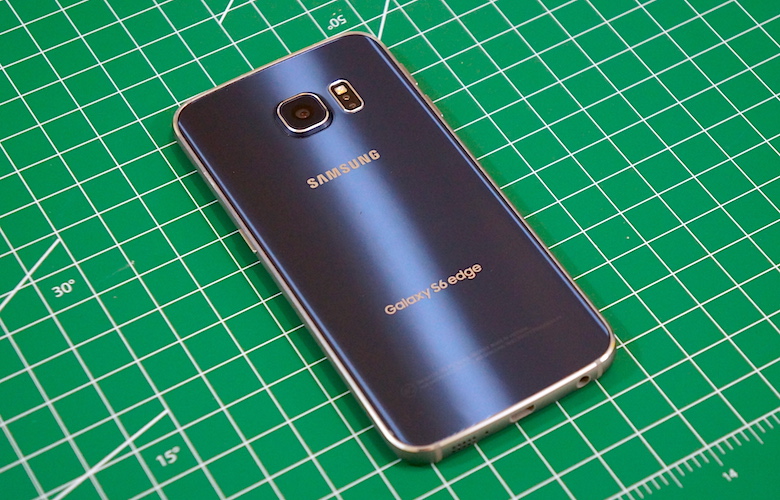 The very first day I used this device in public, I was in New York City waiting for a train at Penn Station. As I stood in the lobby, a railroad employee stopped the official business she was doing, locked eyes on my review device, and cooed “oooooohhhhhh is that the eeeeeeedge?”

That’s why you buy this phone. It catches the eye better than almost any other handheld out there without being too ostentatious about it, and it oozes the same feeling of quality construction as its non-edgy brother. You probably won’t get much mileage out of its fancy screen features, and it’s got room for improvement in software and battery life … but it’s easily one of the most beautiful smartphones of the year thus far, with one of the best Android cameras ever. The Galaxy S6 edge is a pricey but solid buy if you want a flagship phone with the looks to match … and you don’t mind being a wall-hugger.