There’s a lot of over-using and recycling going on lately over at Samsung. Design, materials, names. Whether we talk about the Galaxy S 4 Zoom, Galaxy S 4 Active, or the Galaxy S4 mini, which we’re currently reviewing courtesy of our friends over at Clove.co.uk, the company seems to (over)use and abuse the “Galaxy S 4” moniker. This is not necessarily a bad thing, as the company is relying on its flagship to promote its other phones, but it might be at risk of diluting the perception of the very phone it stands for. 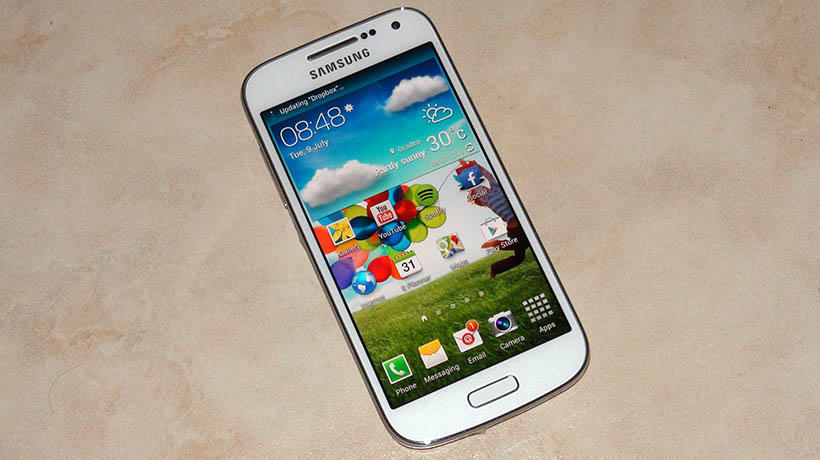 Nonetheless, the Samsung Galaxy S4 mini is a worthy successor to the Galaxy S III mini of last year, and, definitely a notable “Galaxy S 4” variant. Of course there are pros and cons to it, but how does that impact the phone itself and influence its score? Find out more in our Samsung Galaxy S4 mini Review below! 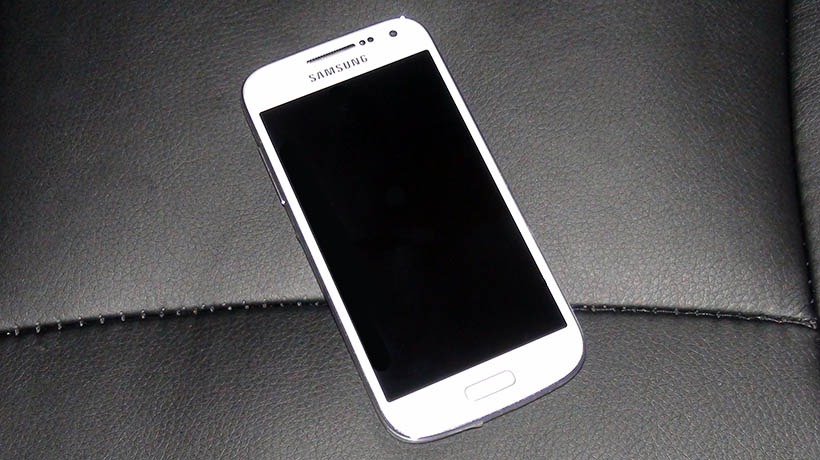 The “Galaxy S 4” moniker does not reflect in the hardware and specifications department of the Samsung Galaxy S4 mini. The “mini” family of products is a completely different animal and it is aimed at a different market and audience: those who want a solid mid-ranger. And solid it is!

What you can’t see underneath the plastic and glass is the dual-core Qualcomm Snapdragon 400 processor clocked at 1.7GHz. It delivers enough power so that the phone performs regular, daily tasks, without a sweat. The speedy CPU is also helped by one-and-a-half gigs of RAM, which comes in really handy when multitasking. Don’t expect to have a huge amount of space available for your apps, documents, pictures, and videos. The Samsung Galaxy S4 mini comes with 8GB of internal storage, out of which the user is left with around 5GB for everything. Luckily there’s a microSD card slot underneath the battery which can be used to expand the storage of the device with a memory card of up to 64GB.

The usual suspects, in the Samsung Galaxy S4 mini’s case, are WiFi a/b/g/n, Bluetooth 4.0, NFC, IR blaster, and, on this particular GT-I9195 unit, LTE capabilities for the radio. 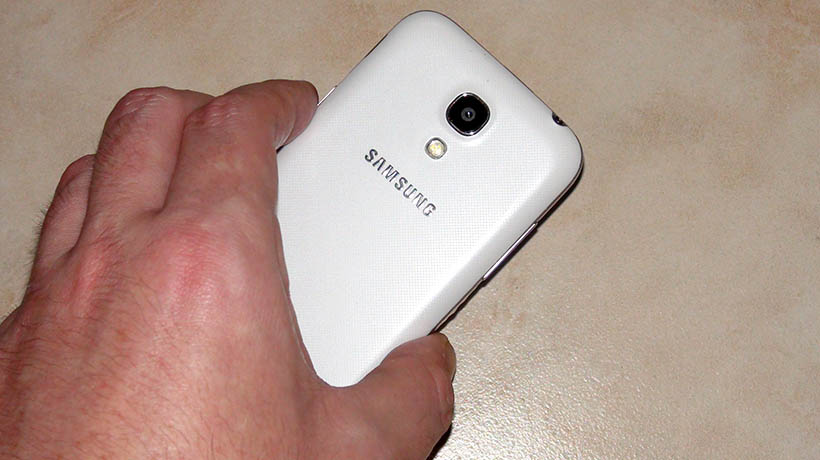 The 4.3-inch screen is what you first notice when you take a look at the device. Yes, ladies and gentlemen, we’ve officially reached a point in time when we can call a 4.3-inch phone, a “mini” phone. Of course, recent trends and Android manufacturers in general are both responsible for this, because of the cornucopia of five-inch-plus phones on the market these days.

Super AMOLED is the technology used, and, just like in the case of any other Super AMOLED display from Samsung, it delivers deep blacks, saturated colors, and poor outdoor visibility. This is, by no means, a flaw of the device; it just comes in the package with Super AMOLED screen-powered Samsung phones, regardless if we’re talking Galaxy S 4, Note II, or the Galaxy S 4 mini.

The resolution could have been higher, and we wish it was 720p. Instead, Samsung fitted the S4 mini with a qHD screen, with a resolution of 540×960, and a resulting PPI rating of 256.

On the top of the screen, just above the Samsung logo, is where you’ll find your earpiece, and, to the right of that, your proximity and light sensors, as well as the 1.9-megapixel front-facing camera. Below the screen is the apparently “obligatory” home button found on most Samsung phones, flanked by the menu and back capacitive buttons to the left and right of it. 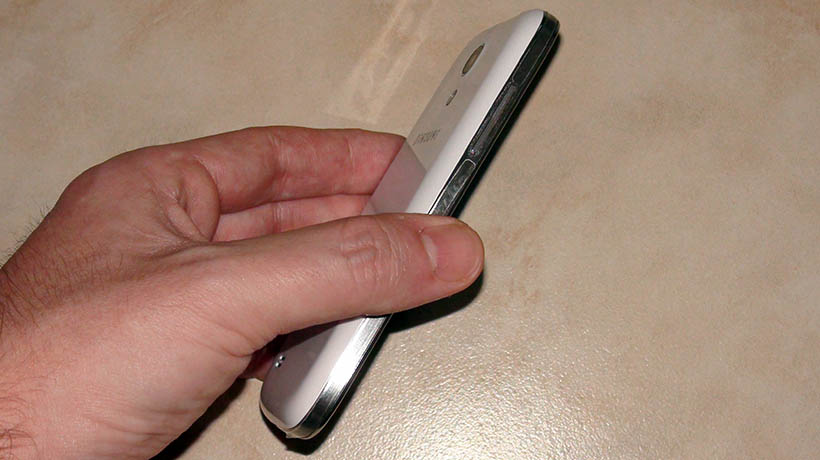 The left side holds the volume rockers while the power button is placed on the opposite (right) edge. The top holds the IR blaster, 3.5mm headphone jack, and a secondary microphone, while the main mic is placed on the bottom, adjacent to the Micro-USB port for synching and charging.

On the back you’ll find the eight-megapixel main shooter with the LED flash below it. The speaker is on the bottom, exactly like it is on the Samsung Galaxy S 4.

The power pack supplied with the unit is one of 1,900mAh (7.22Wh), and the platform of choice is Android 4.2.2 Jelly Bean with Samsung’s own TouchWiz user interface on top of it.

There is not much to say about the software, user interface, and user experience on the Samsung Galaxy S4 mini. That is, there is a ton to say about it! Since everything on the S4 mini is pretty much the same as on the S 4, and, this is a quick review, we won’t bombard you with too many details. You can, always, check out our full review of the Samsung Galaxy S 4 and read about all the details you need.

However, we’ll not turn the page until we tell you about a couple of differences between the Galaxy S4 mini’s software and the UI on the Galaxy S 4. Yes, we did say above that everything is the same, but being a mini, the S4 mini has a couple of features less than its bigger brother, mostly due to the lack of supporting hardware. 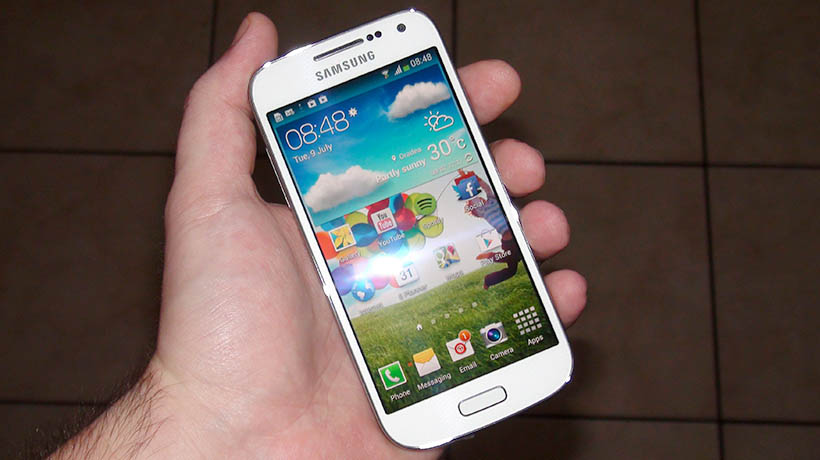 First things first: the Galaxy S4 mini does not have an LED notification light (though we really, really, wish it had one). Hence, you won’t find any LED notification references and options in the Settings. Samsung was kind enough to remove it from TouchWiz and clean it up. Don’t look for it.

If you’re a huge fan of AirView and AirGesture, you’ll have to consider the S 4. The S4 mini doesn’t have these features either so no finger hovering over the screen to preview some information, and no waving in front of the display for doing stuff like flicking through your pictures in the Gallery. 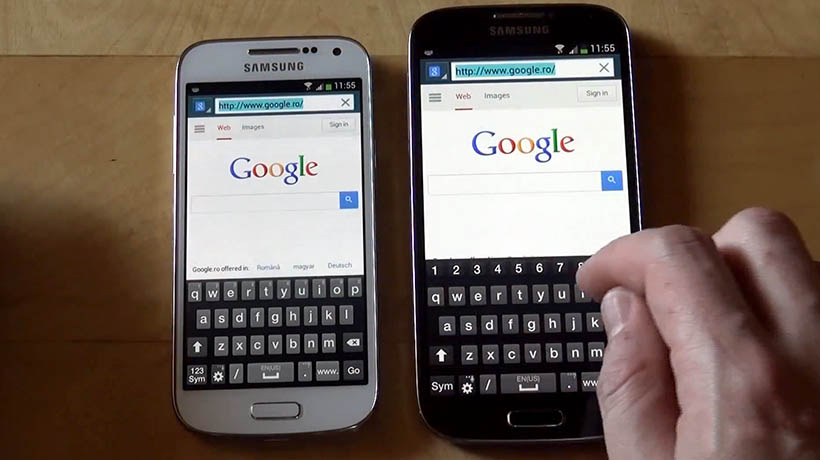 Since there’s no LED indicator, it made all the sense in the world for Samsung to also remove additional sensors found on the S4, like the thermometer & Co., so no special S-Health functionality, app, or widget, is found on the miniature.

There’s no drama, animated photo, and eraser mode, inside the S4 mini’s Camera application. Samsung compensated for the lack of those by adding a certain “continuous shooting mode”. Unfortunately there’s also no video stabilization option inside the Camera options, so don’t look for it.

If you can live with the above (or the lack of), the S4 mini pretty much delivers everything the S 4 does, in terms of user experience. 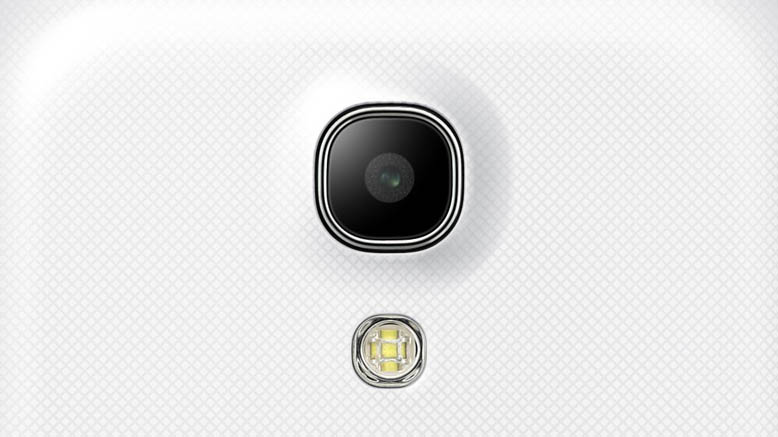 The camera produces great images! Shots are well exposed, balanced, and sharp. We are also happy that the GS4 mini doesn’t lose focus towards the edges of the frame, something exhibited by some other phones on the market these days. Low light performance was also decent. Don’t expect Nokia Lumia 925-like performance, but it was definitely there with its bigger brother, the S4.

Even more, as strange as it may sound, to our eyes, some of the shots captured by the GS4 mini looked a tad better than the ones shot by the GS4. It may of course come down to personal preference, so don’t read too much into this sentence, definitely not more than there’s to read.

Check out the samples below, taken in various conditions and with different shooting modes: indoor (with flash), HDR, low light (no flash), indoor (no flash), and outdoor. 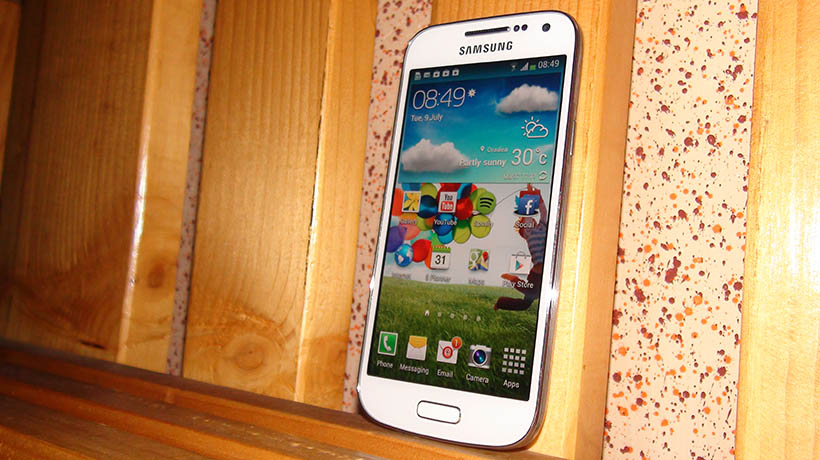 This is our favorite part of the review, and we couldn’t wait to get here. We’ll be honest: we were a bit skeptical when we started reviewing the Galaxy S4 mini, because we’re used to using the flagship S4. “An entire week with a mid-ranger…” were our thoughts trying to anticipate the waiting and frustration resulting from switching from a flagship powerhouse to a lower specced device.

We’re happy to report that we were wrong! The S4 mini couldn’t perform any better. In fact, if you’ve seen our Samsung Galaxy S4 mini vs Samsung Galaxy S 4 video (also embedded in the videos section at the top), you’ll see exactly what we’re talking about. We expected the S4 to wipe the floor with the S 4 mini. Instead, the little fella was right there with its bigger brother on steroids. Sometimes you’ll see the S4 launch apps a hair faster (thanks to its octa-core processor) but, on its own, the S4 mini will not disappoint. We tried hard to bug it down with regular, day-to-day tasks, and we couldn’t.

Battery life was a pleasant surprize too. After a day with phone calls, text messages, social media on Facebook, Twitter, and Google+, taking pictures, browsing the web, instant messaging, Google Maps, YouTube videos, Spotify music, and even workout tracking, we were still good for a couple of hours the next morning while leaving the phone on overnight.

If you don’t exaggerate in your usage scenario you’ll definitely be good for a full-day with the S4 mini. If you’re heavy, every day, on YouTube, games, and alike, expect less, but we’re talking regular usage scenario here, and that’s where the S4 mini’s battery doesn’t disappoint.

Voice and data performance doesn’t disappoint either. We experienced no problems at all; earpiece and speakerphone performance was good, and we sounded good over the microphone. 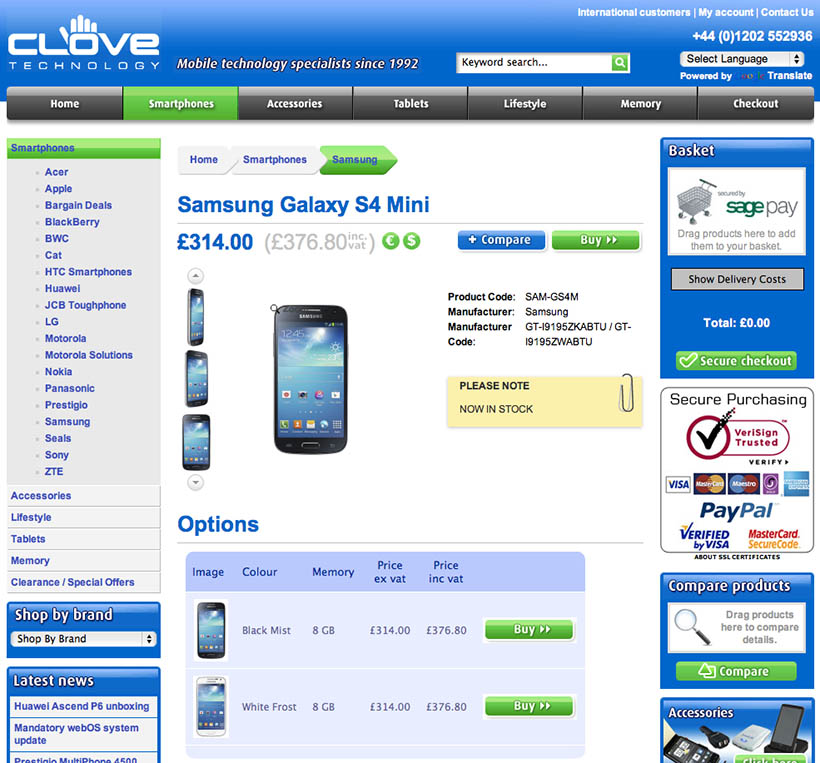 The Samsung Galaxy S4 mini we reviewed is the GT-I9195, meaning it has LTE capabilities. It was supplied to us by our friends over at Clove.co.uk from where you can buy it/import it from. It will set you back £314.00 (£376.80 with VAT), which translates to about $465 (add 20% VAT, if applicable), for the SIM-free, unlocked device, with no contract.

We were happy to spend time with the Galaxy S4 mini. When we got the chance to first meet it, on June 20, in London, we didn’t know, form our brief hands-on, that there’s so much more to this miniature Galaxy S 4 than meets the eye.

With the GS4 mini, Samsung has set the bar for mid-ranger, “mini” phones. Let’s not forget that the main rival, HTC, is about the release a One Mini too, later this year, if the rumors turn out to be true. That’s going to be an interesting fight! 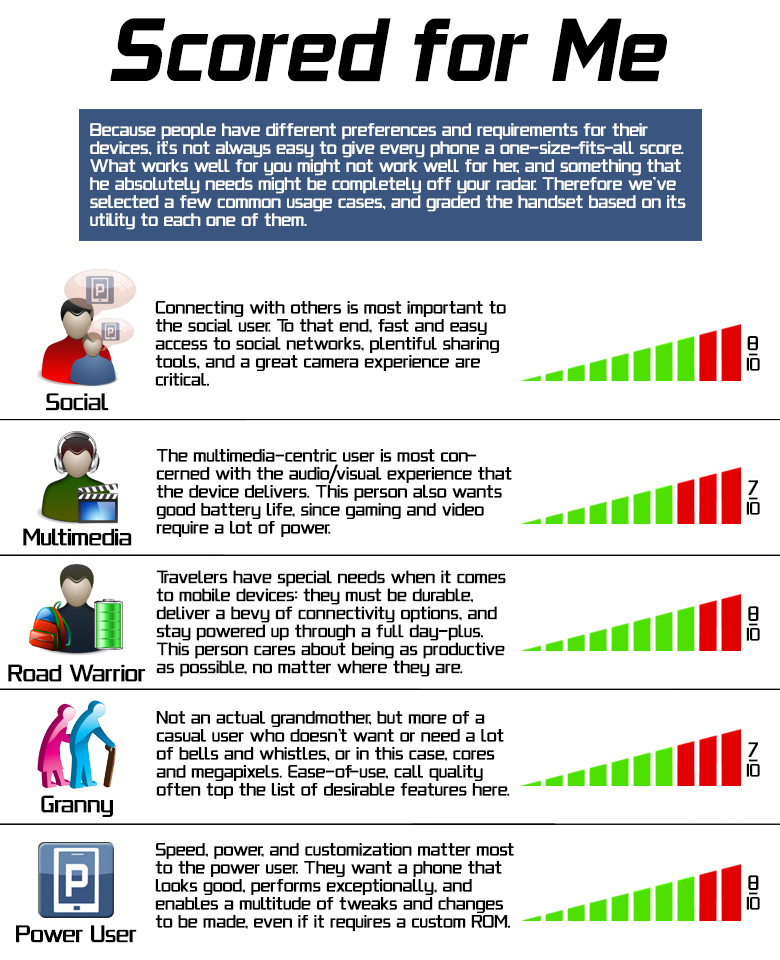 Check out the latest deals on Samsung products, which include the latest Samsung Galaxy Z Fold 3, Galaxy Z Flip 3, and more