The Galaxy S10e has many of the features that make it an Android flagship phone in 2019, but without the excessive load for bear on functionality and costs.

If you have to flip through two whole calendars or more before you could point to when you bought a new phone, you likely didn’t pay as much for that one as you would for the likes of, say, a $1,000 iPhone XS or a $1,000 Galaxy Note 9 or even a $750 iPhone XR.

With the Galaxy S10 and Galaxy S10+, Samsung has firmly planted itself farther away from the days of $650 devices as it moves to compete with Apple in those higher plains. And so, if you’re only willing to afford $750 on a flagship-level Android phone, then you may consider what this company believes to be the “essentials.”

That is the word the ‘e’ stands for in the Galaxy S10e. It has much of the same design language, nearly identical software features through the Android Pie-derived One UI and a few compromises in the hardware department when compared to the S10 or S10+, but the core thesis of the matter is that you’d be doing better off here than elsewhere at the same price or less — not just with what’s in the box, but with the corporate and market support that a Samsung logo on a phone garners. 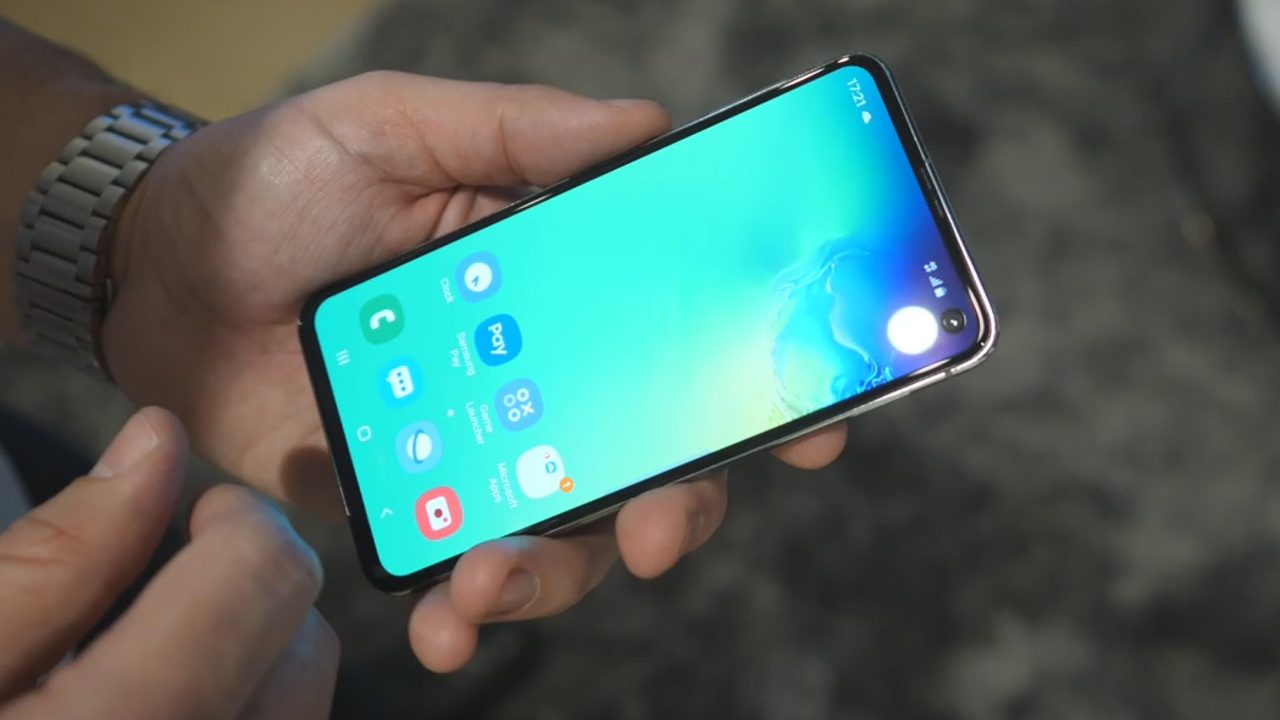 Speaking to said compromises, the Galaxy S10e omits the curves from the sides of the display cover glass found on its more expensive brethren. Its fingerprint sensor is found not underneath the display, but rather embedded within the power button on the thin metal ridge to the right side, using legacy capacitive technology. It’s hard to tell if we’ll miss the iris scanner that was on the previous two generations of Galaxy S phones, but since they’re not in the S10 or S10+ either, this is not particularly a pox on the S10e.

The display, however, is not as pixel-dense as the larger devices are — though most people don’t really notice that their Galaxy S8’s and S9’s 1440p displays are set to display content at 1080p by default. And yet, even with a smaller display, it’s still able to take advantage of Samsung’s own HDR10+ protocol. Much like Dolby Vision without being Dolby Vision, this allows streaming video to show off an extended range of colors with fine-tuning done frame by frame. Testing from research firm DisplayMate found the S10 series’ panels to be the brightest and most color-accurate seen on a smartphone form factor yet. With pitch blacks from turned-off diodes, that gives a lot of range for the phone to work with.

And it will sound almost or just as loud as the S10+ with stereo speakers tuned by AKG and Dolby Atmos surround sound. Yes, there is a USB-C port. No, there’s no need for a dongle as there is a headphone jack, too.

Below the volume rocker on the left side of the device is the Bixby key, back for another season. Samsung’s own digital assistance service is now on version 2.0 and is able to be programmed for routines — a series of tasks done on verbal command or at a certain point in time. It also feeds into photo-based search queries and quick requests like asking to play music. 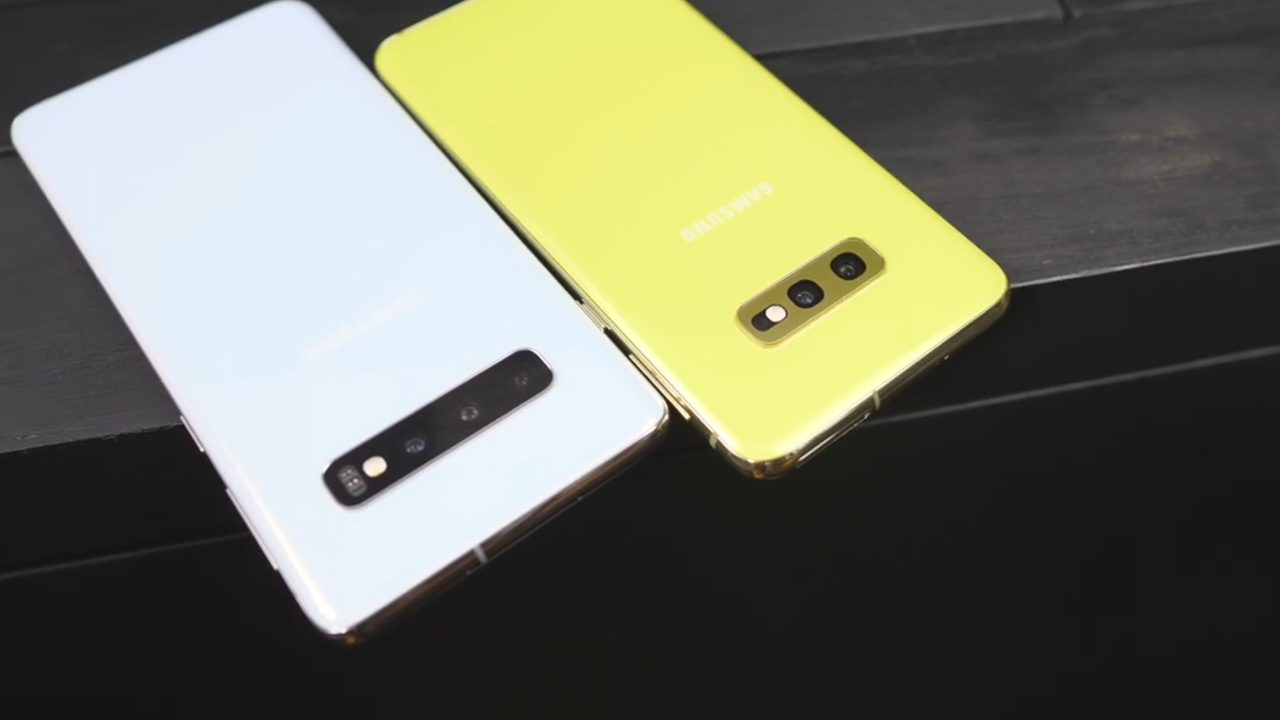 The S10e has two rear cameras to the S10’s three: it loses out on the telephoto camera, but still retains an impressive 12-megapixel snapper with the ability to toggle between two apertures for the best photosensitivty and focus range; there’s also an ultra-wide 16-megapixel unit that gets at the bigger picture. This generation of Samsung phones features the world’s first 4K video-recording dedicated selfie camera, embedded right in the top-right corner of the company’s “punch-hole” style Infinity-O display. All video can be recorded in HDR+.

The applications processor will vary per region. In the United States, we’ll likely see the Qualcomm Snapdragon 855 in place. The Snapdragon and Samsung’s house-made Exynos 9820 chipset have neural processor units dedicated to machine learning calculations for applications such as software-induced bokeh in selfies, augmented reality tools, graphics processing in games and determining what apps to keep in memory the most often for easy, power-efficient access.

Both are capable of up to 2Gbps downlink on 4G LTE (not 5G, we’ll get to that in a second) as well as the new Wi-Fi 6 standard and Bluetooth 5. The S10e has Samsung Pay for quick payments through NFC or, for traditional swipe terminals, MST. An optical heart rate monitor is available next to the rear camera units and data can be threaded into the Samsung Health app for further tracking. The device can be taken pretty much anywhere with an IP68 rating for complete protection from dust and for stillwater immersion up to 1.5 meters for 30 minutes.

Fast charging is available through the provided wall adapter and through the Qi-standard wireless charging pad. The Galaxy S10e is also able to discharge its own power to other devices through its charging coils — it’s a feature Samsung dubs “Wireless PowerShare” and something that Huawei brought to its recent Mate 20 series of phones. It will be able to charge the new Galaxy Buds (2019), Galaxy Watch Active, Galaxy Watch, Gear Sport and Gear S3. 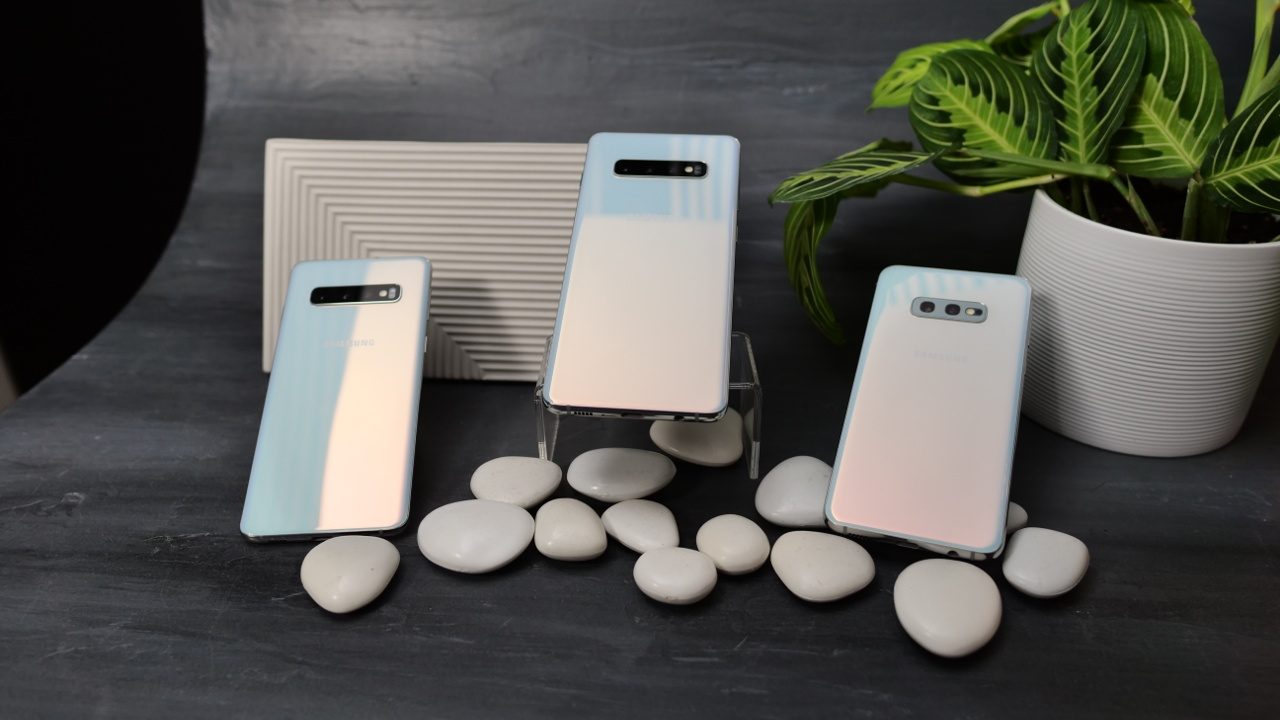 In the United States, the S10 and S10+ will be available in Prism Black, Prism White, Prism Blue and Flamingo Pink. Major carriers and retailers including Samsung itself will be launching pre-orders for network-locked and unlocked units tomorrow, February 21 at 12:01am Eastern, in time for the first shipments from March 8. The base configuration of 6GB of RAM and 128GB of storage will cost $749.99.