Samsung Galaxy S10 rumor roundup: what to expect from all these phones [U]

There are three main Galaxy S10 variants, then there’s the 5G version (or two), and then a completely unrelated foldable phone! Let’s unpack the details.

We are just shy of two weeks out from our first sight of Samsung’s Galaxy S10 showcase and the intelligence keeps flowing out.

If you haven’t been closely following the trail of rumors that have swirled around these devices — and even if you were, it was easy to get lost along the way — we have a short and sweet guide to what all the leakers and gossipers have been talking about. You can learn about each aspect individually by clicking on the hyperlinks below to be taken to a dedicated story on that topic.

As nearly all of these details are based off of leaks and rumors, do keep a skeptical eye as we jog down the numbers and mechanics. 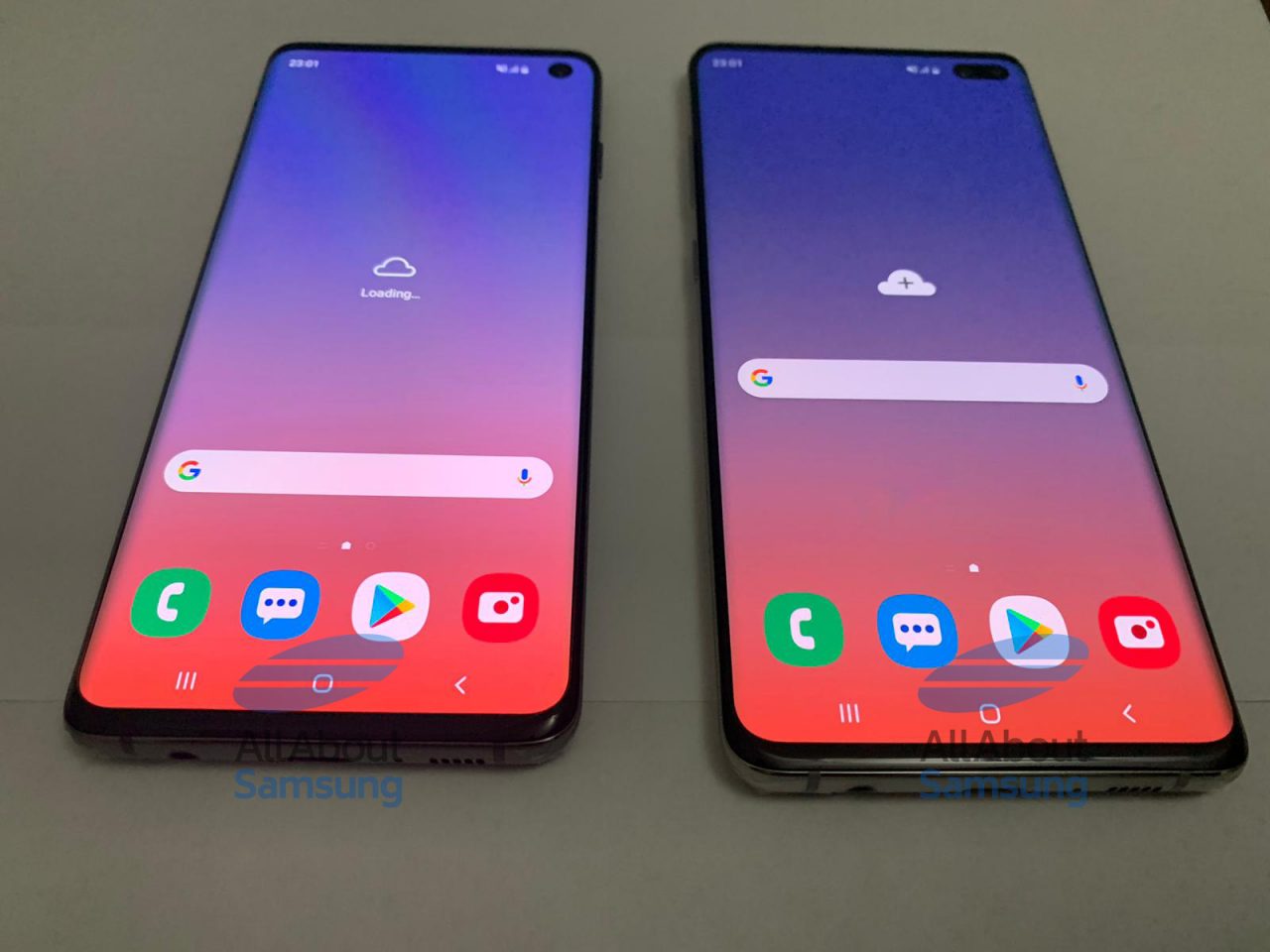 There will be three devices that will be announced at Samsung’s Unpacked event on February 20 in San Francisco and sent to market for immediate global release on or around March 8: a lightweight Galaxy S10e, a mainstream Galaxy S10 and a more premium Galaxy S10+.

The 10-megapixel selfie camera, which may produce 4K selfie video, will be placed within the top right corner of the full-body AMOLED Infinity Display — in the case of the S10+, there will be room for an extra depth-sensing camera. This hardware might facilitate a new user experience paradigm, expected to be part of the new One UI skin on top of Android Pie. As for sizing, the S10e will have a diagonal of 5.8 inches at 1080p resolution. Meanwhile, the S10 will go to 6.1 inches and the S10+ to around 6.4 inches, all at 1440p resolution. 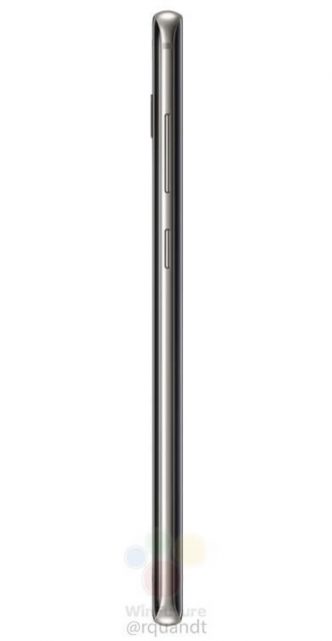 On the S10 and S10+, an optical fingerprint sensor will be found underneath the display. One accessories maker suggests that the sensor may not work if users opt to put a screen protector on their device. For the S10e, the capacitive fingerprint scanner will be embedded in the power button on the right side of the device. And yes, it looks as though the Bixby key will remain on the left, though better separated from the volume rocker.

Generally, Samsung is expected to carry over its glass and metal industrial design, which dates back to the Galaxy S6. However, some premium units are expected to feature ceramic instead of glass. In any case, we expect it to retain a dust- and water-resistance IP rating as has been seen since the Galaxy S7. 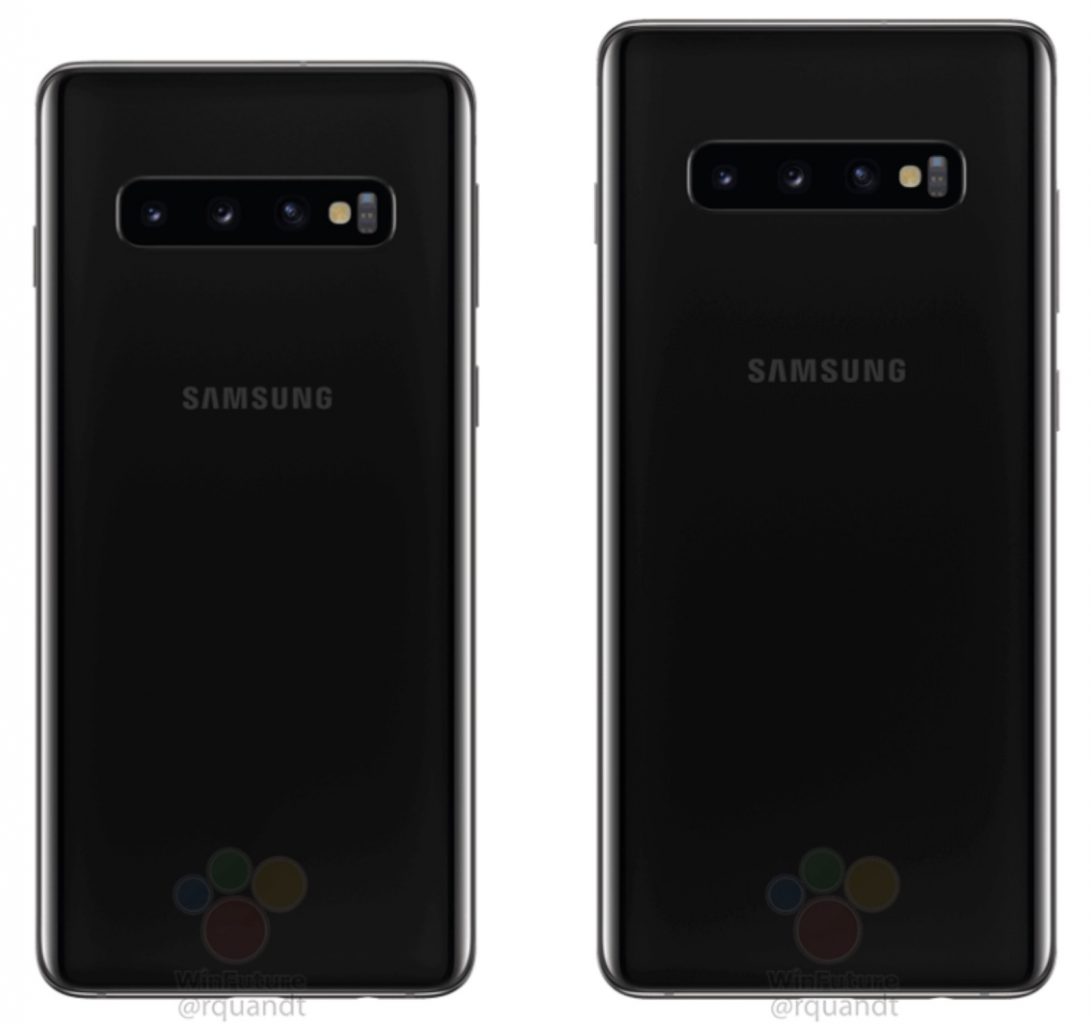 All models will feature a dedicated optical heart sensor next to the cameras, as per usual since the Galaxy S6. The S10e will omit the telephoto unit. Special “Bright Night” software will optimize for shooting in dark conditions.

Samsung Pay users might be surprised to hear that a Samsung-made cryptocurrency wallet may be included for secured and quickly verifiable payments. That’s supposedly in addition to NFC and MST technologies which make it possible to use phones to pay at tap terminals and swipe terminals.

It is suggested that the S10+ will be less than 8mm thick, but will still have a relatively large battery at 4,100mAh of capacity. The S10e is believed to have a cell measuring around 3,100mAh while the S10’s will be closer to 3,400mAh. Fast charging and data transfers will be done through USB-C. Users can also utilize wireless charging to and even from the device. One other accouterment is a single speaker next to the charge port. 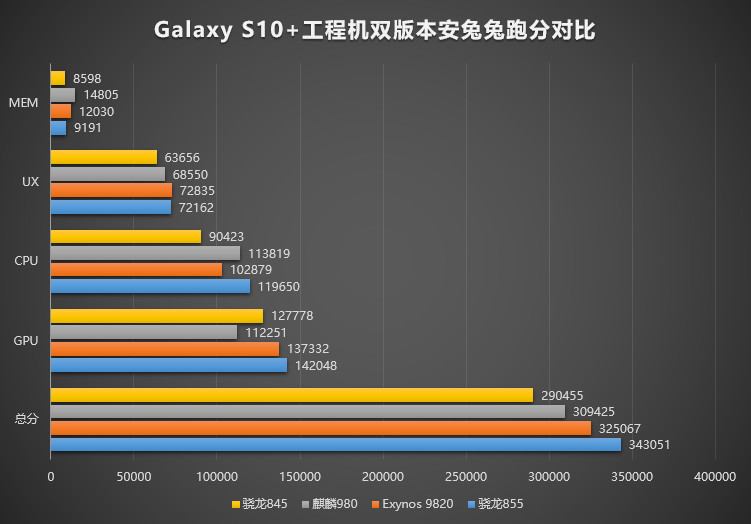 It’s from this point where things get tricky and factors become more dependent on market distribution.

Customers will see either a Qualcomm Snapdragon 855 systems-on-a-chip and modem or an in-house Exynos 9820 chipset. All variants will have a base memory configuration of 6GB of RAM and 128GB of storage. They also have the option to bump up to 8GB of RAM, though the S10e will match that with 256GB of storage while the other two models will have 512GB of storage. A scarce few S1o+ units are up for grabs toting 12GB of RAM and 1TB of storage. It’s still likely we’ll see a microSD slot and, for that matter, a headphone jack.

Here’s what one leaks blogger suggests some European markets will pay — this particular example supposedly comes from the Netherlands. Keep in mind that MSRPs will differ per region based on various factors and that the configurations are based off of older information:

An Italian publication has suggested slightly more expensive prices for each device, a likely indication for higher-VAT Eurozone markets. 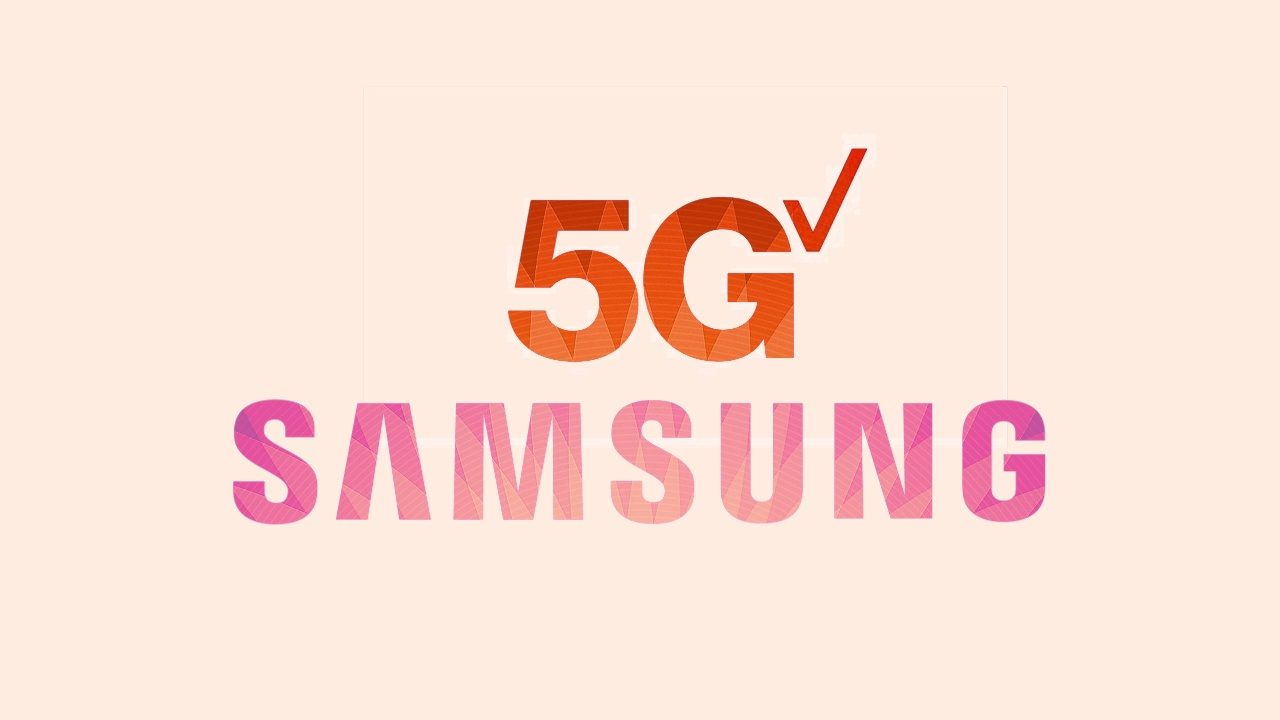 It’s at this juncture that we introduce a fourth potential model, the first in Samsung’s portfolio that will bring 5G connectivity to the market: the Galaxy S10 X. It may feature a 6.7-inch display, up to 12GB of RAM and 1TB of on-board storage, a 5,000mAh battery and perhaps a fourth rear camera, though we don’t know what it would be used for. The rest remains the same as a Galaxy S10+.

Pricing is believed to be at least $1,400, though the chatter has it closer around the $1,600 level. In the US, Verizon is believed to be the first carrier to sell the phone, though it’s unclear if there will be two Samsung 5G phone models available at the nation’s largest network. Details remain sketchy on a device named “Bolt.” 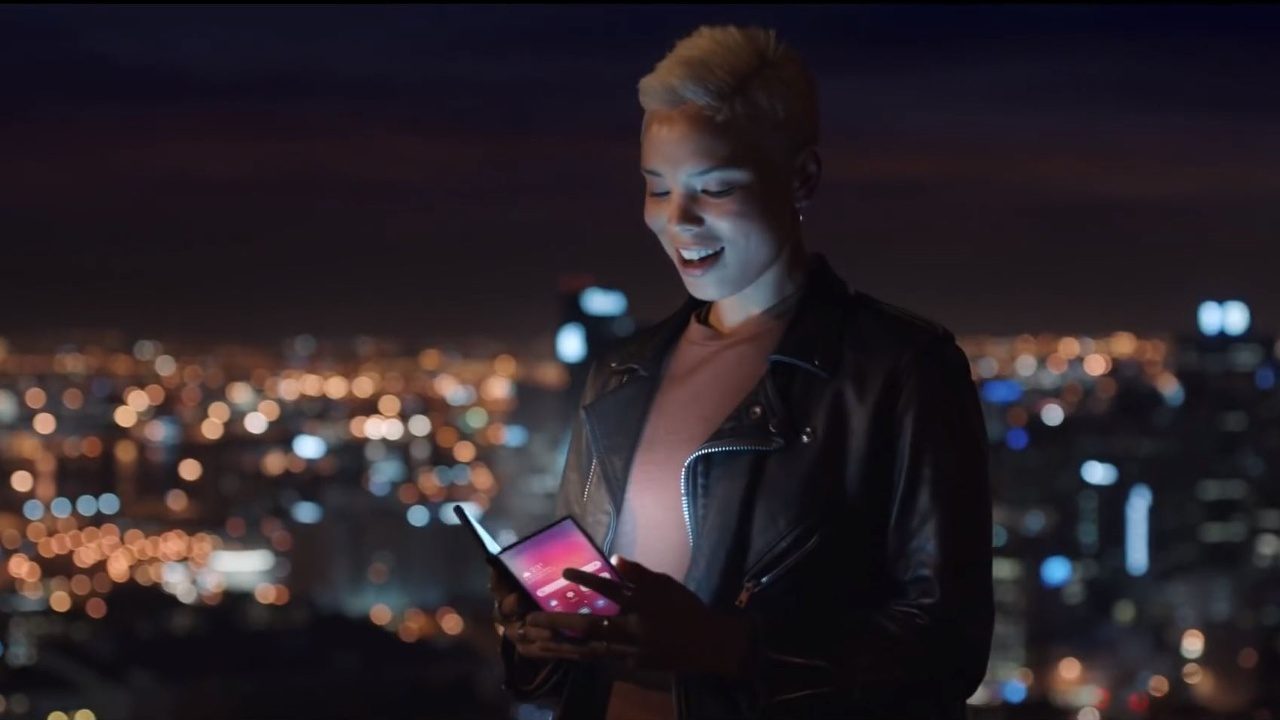 Finally, we aren’t sure if we’re getting a release timeline for Samsung’s foldable phone, but the company has promoted its presence at the Unpacked event. We aren’t even sure if it will be called the Galaxy F or Galaxy Fold or Galaxy Flex. But we do figure that it will easily cost into the $2,000 region and probably won’t look like something from an advertisement masquerading as a movie.

All we have to base our thoughts on is a prototype device featured at the most recent Samsung Developers Conference and, thanks to our colleagues at XDA-Developers, we have an idea of how the 7.3-inch tablet-sized flexible display and the 4.7-inch single-pane front-side display will measure up. It may have the same S10+ rear camera system. 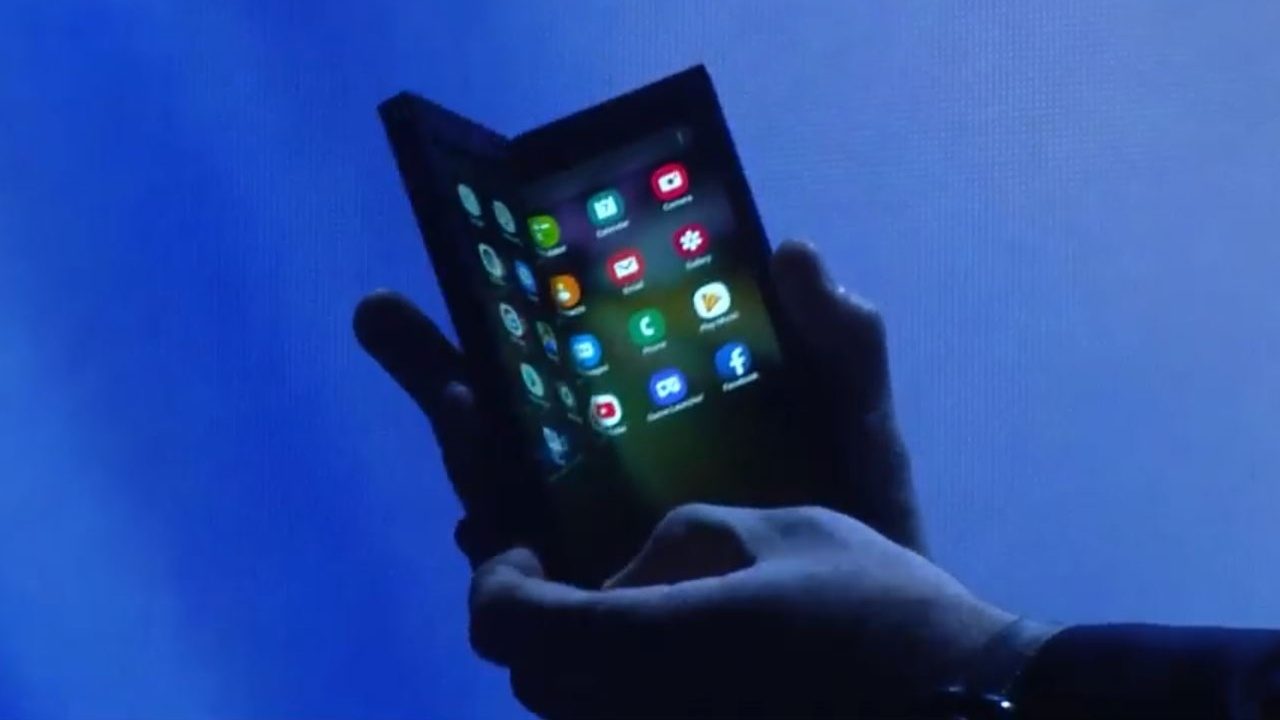 In summation, Unpacked will not be an event you’ll want to miss if you’re looking to upgrade your phone this year. Keep track of it all by staying with Pocketnow as we provide live coverage and analysis in San Francisco on February 20!