The Samsung Galaxy S III is the latest Android superphone to come out of South Korea. It’s available for most carriers in the States and in an international flavor for our friends in other countries, which Pocketnow’s Brandon Miniman gave the high marks in his extensive review.

This time we’re taking a close look at the Verizon version. Will she be able to match up with the other versions we’ve reviewed? Does she have any tricks hiding up her proverbial sleeves? Let go find out!

The casing of the Verizon Galaxy S III is pretty much the same as all its siblings. Like the other U.S. variants, it’s almost a totally different device from the International version of the phone due to the different band requirements that we have stateside. 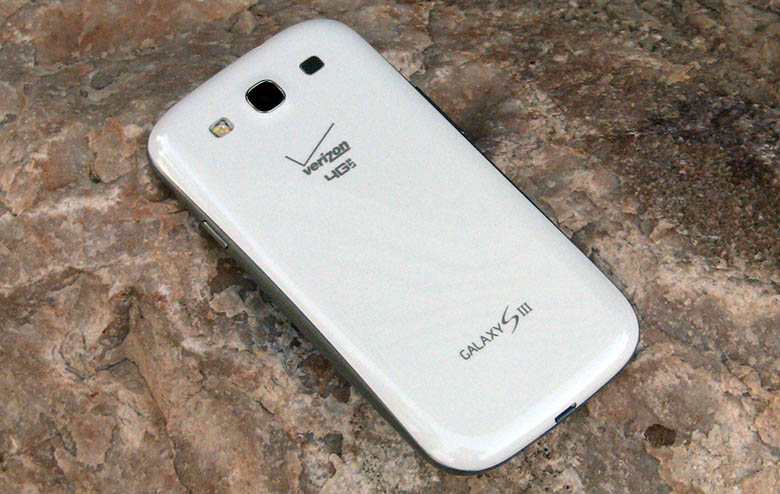 The international G3 runs on Samsung’s quad-core Exynos 4412 processor, clocked at 1.4GHz. The Verizon version (like the other American variants) instead has a dual-core Qualcomm Snapdragon S4, running at 1.5GHz. Although that may seem like a significant downgrade, the resulting performance isn’t nearly as bad as one might think. In our review of the Sprint version of the SGS3 we went into some detail, about the S4’s transistors, its 28nm process, and the fact that it’s built on the Krait architecture which is superior in most metrics to the A9 core of the Exynos.

Like the Sprint version, the Verizon SGS3 comes packed with 2GB of RAM. That’s a fairly understated sentence to describe not only the speed and agility the extra RAM provides, but also the potential future-proofing for Android 4.1 Jelly Bean.

Lastly, the choice of processor brings with it another bonus: support for Verizon LTE. Unlike the Sprint version, the Verizon SGS3 includes a user-accessible microSIM next to the microSD slot. You need a valid SIM in this slot before you power up, otherwise your superphone is a super-paper-weight (which is why our review of this phone took longer than we would have preferred). 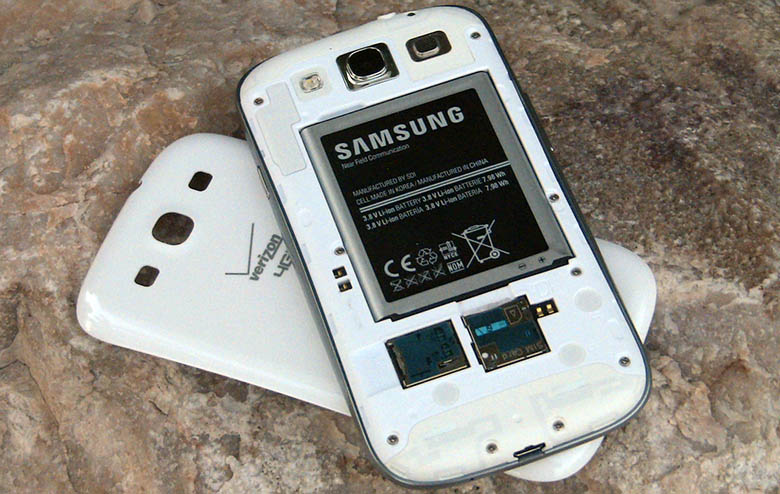 Other than the Verizon LTE bits, all the other details are essentially the same, from the huge 4.8-inch SuperAMOLED display with 306ppi and 720p on the front, to the 8MP 1080p camera with LED flash on the back. The Verizon version is available in 16GB and 32GB flavors as well as your choice of blue or white. You can officially expand up to an additional 64GB via a MicroSDXC card, unlike some of the other U.S. versions that only list support for up to 32GB cards.

There’s been a lot of talk about the PenTile sub-pixel arrangement that Super-AMOLED displays on the Galaxy S III use. Despite its high resolution, the display on the SGS3 isn’t as great as that on the HTC One X. On the other side, unless you put your phone under a microscope, you’re not going to notice. 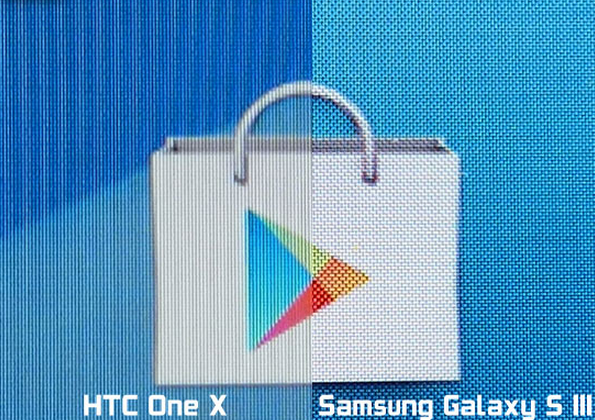 We love notification lights and, like its siblings, the Verizon version of the SGS3 includes one of the biggest, brightest notification LEDs that we’ve seen. You can’t customize the color of the LED to specific events out of the box, but if you want to, there’s an app for that. 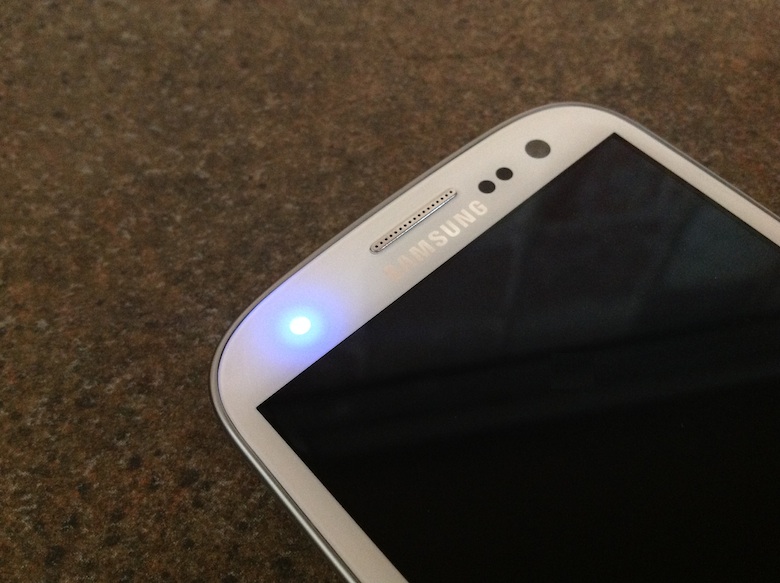 There’s nothing wrong with the design of the SGS3, but there’s nothing really outstanding about it, either. The design is simplistic, but maybe that’s what we need in a smartphone. 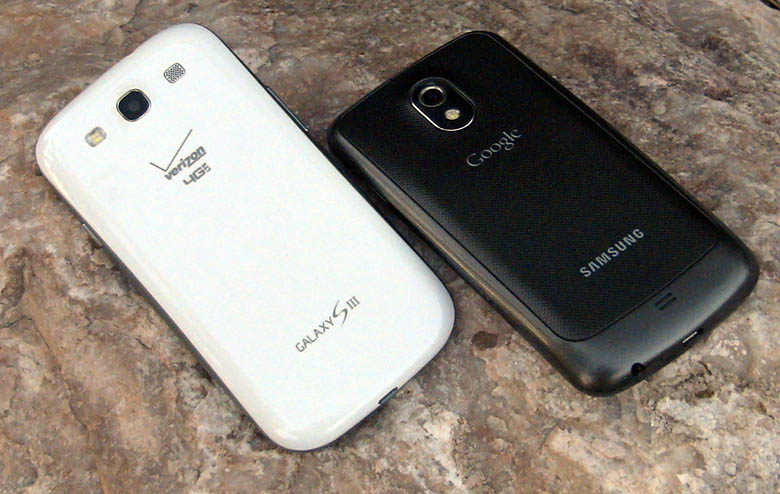 The finish of the phone is a “hyper glaze” coating that makes the phone feel cheap, it’s terribly slippery, and attracts fingerprints better than anything we’ve seen. Combine that with the fact that it only weighs in at 4.7 ounces (133 grams) and you may think the Galaxy S III is almost too light. The phone’s silver-colored bezel is plastic — not the metal that you might mistake it for.

Are we being to hard on Samsung, perhaps. But this isn’t an entry-level phone, this is a $600, flagship-class superphone. Holding it your hand, however, you won’t feel like it, which is disappointing.

Notwithstanding Samsung’s failure to impress us with the case of the phone, they pulled out the stops with the software. 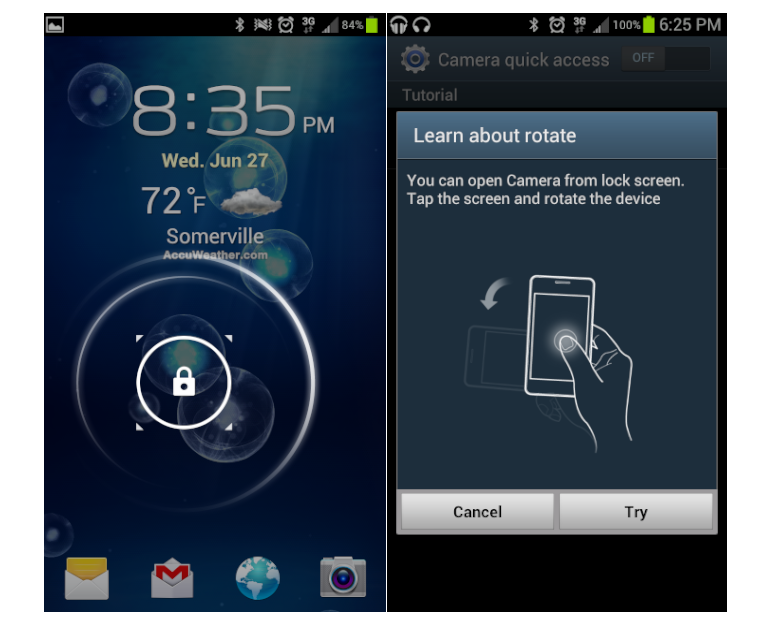 We talked recently about how far the latest version of Samsung’s TouchWiz UI (which they call “Nature UX”) has come. That’s true, but Android purists are still going to feel like the UI is a plastic-imitation of the Ice Cream Sandwich interface they’ve come to know and love. Don’t let that stop you. Samsung exercised a great deal of restraint with TouchWiz 5.0. Lots of features which made Ice Cream Sandwich such a breakthrough in UI haven’t been messed with.

Pushing the UI forward, Samsung put a lot of thought and effort into gesture-and motion-based commands. Some are fun and surprisingly useful, others are still very rough around the edges. Like the other versions of the phone, the Verizon offering includes Smart Stay, Buddy Photo Share, Pop Up Play, and S-Voice. Samsung must have felt the gestures either aren’t intuitive enough or are so new that they included tutorials about how to use them everywhere, and they’re off by default, but will ask you to “opt in” the first time they pop up. 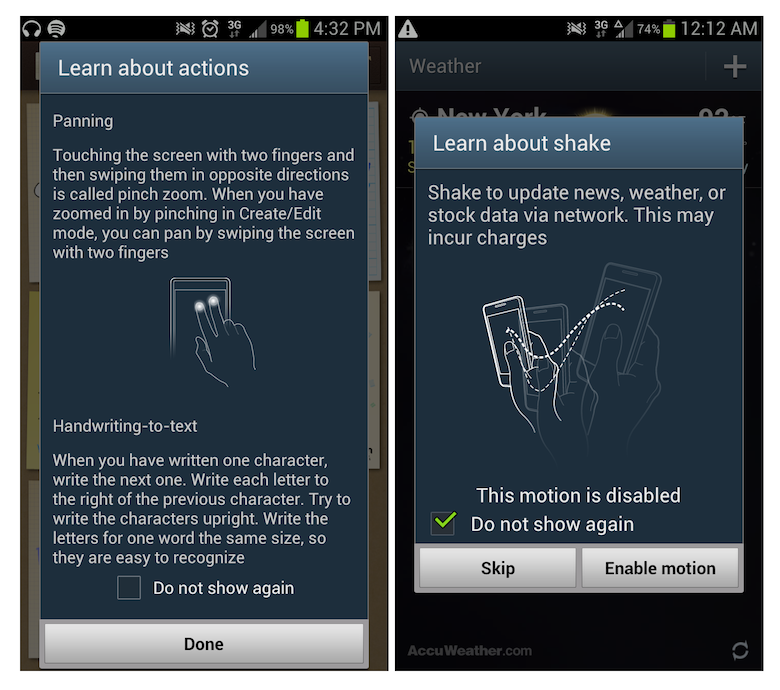 Samsung decided to include a physical “home” button below the display which feels like it should be an “action” button more than a “home” button. Additionally, the menu and back buttons are capacitive and back-lit, but aren’t “on” all the time which causes you to “guess” where to press to perform these actions. You can set them to be on all the time, but you’ve got to know about this option, hunt it down, and manually set it. We thought Samsung would have learned this lesson with the Nexus S.

There’s also the question of using capacitive and physical buttons at all when the screen is so large and could easily have fit the Ice Cream Sandwich on-screen soft-buttons without a problem. One more nit to pick: there’s no multi-task button, so if you want to quickly switch to another app you’ll have to long-press the home button — adding time to something that by its very nature should be fast. 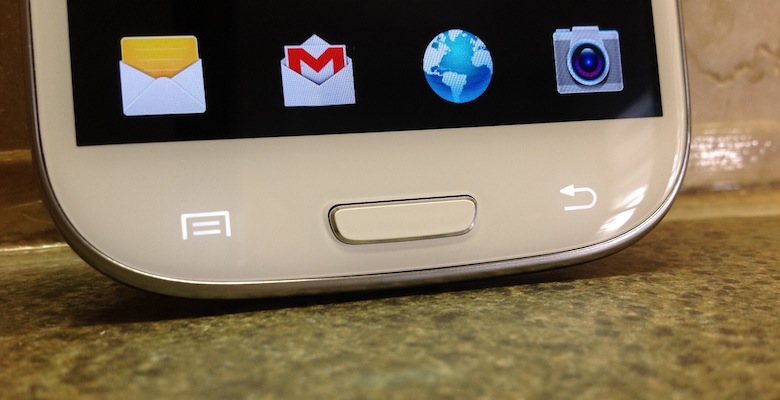 One of Android’s biggest advantages is the ability to use a custom keyboard. It seems like every OEM feels like it’s necessary to customize the stock keyboard to “make it better”. We called the keyboard on AT&T’s HTC One X “one of the worst virtual keyboards we’d ever come across.” The keyboard on the Galaxy S III’s is even worse. You might want to consider replacing the stock keyboard with another from the Play Store right away.

Keyboard notwithstanding, the everyday apps like Email and Messaging are functional and utilitarian, and did exactly what you’d expect them to, but not much more. 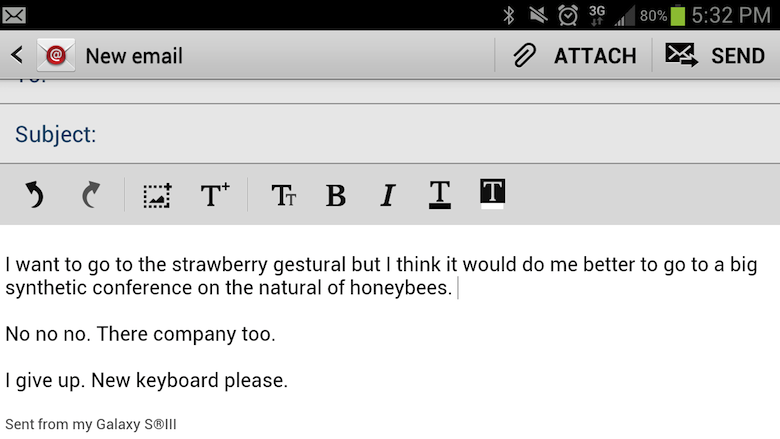 Even after all that, we’re still very positive about the software experience on the Galaxy S III. It works. It’s fast, and it looks nice in the places that you’re probably going to be using it most.

The Verizon SGS3 performs almost exactly like the global version, which isn’t surprising because the cameras are identical. Color reproduction is quite good, though the higher-than-normal saturation of S-AMOLED displays means your results will often look quite different when viewed on a computer than they do on the phone’s screen.

Like its siblings, there are many fun and useful features included with the camera software — which you’ll probably never use.

The front-facing camera is good for video calls, face unlock, and the occasional self-portrait.

Using the SGS3 as a dedicated music player worked well. We miss the extra depth of HTC Beats. There is a setting called SoundAlive in the built-in music player that lets you specify an EQ preset, which helped some playlists sound better. The included headphones are great at blocking out external noise, but being white, the Galaxy S III will probably be mistaken for an iOS device.

The phone’s responsiveness and software experience was well above-average. It’s not quite the “buttery smooth” experience that we’ve gotten used to on devices running Jelly Bean, but the update to Jelly Bean should come along soon. Here’s how the SGS3 looks in the benchmarks. For comparison, the scores from the quad-core international version of the phone are in {braces} and the HTC One X scores are shown in (parentheses).

The benchmark scores show an interesting mix with some favoring the quad-core processor in the international SGS3 and others performing better with the 2GB RAM in the Verizon version of the phone. In practical use we’d favor the extra RAM over the extra cores. When gaming it’s more dependent on the game than it is the hardware.

The SGS3 is fast enough for day-to-day use, but it’s the LTE that makes the phone really shine. This is by far the fastest connection speed we’ve ever tested in a phone over a cellular connection — and blows my cable internet connection out of the water.

Unlike its siblings that get good marks in the battery department, the Verizon version is just “above average”. We were able to eek a full day out of the phone with moderate use. On days we didn’t use the phone much, battery life was excellent with up to 24 hours of light use and standby.

Your results will vary depending on how you use the phone, but as long as you’re not going nuts, this device should last the average user from morning until early evening. Power users will probably still want to carry a spare battery or plug in at the half-way point. Also, if you haven’t doing so yet, you should check out our video on maximizing the Galaxy S III’s battery life. 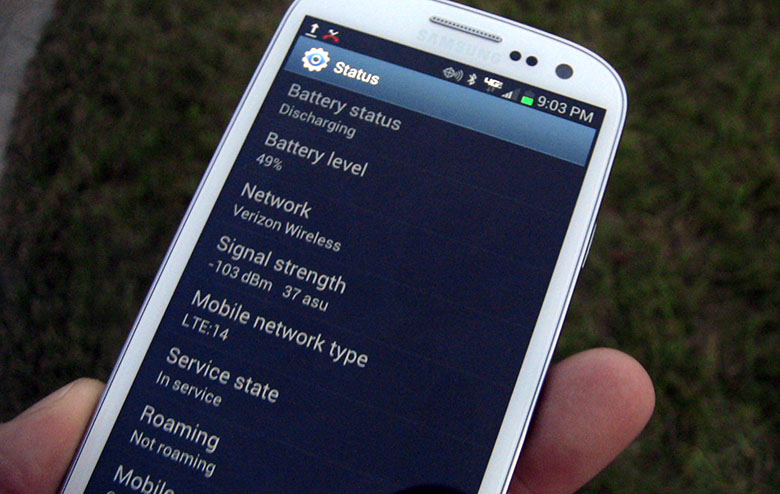 To one-up Michael Fisher, we even watched three full episodes of Star Trek: The Next Generation on Netflix over LTE: the experience couldn’t have been better.

We tested the Galaxy S III on Verizon’s network between Logan and Salt Lake City, Utah — which isn’t someplace you’d expect to have very good LTE coverage. Were we surprised! The LTE speeds on this phone averaged 20Mbps down, with speeds in the 30Mbps range common-place. Additionally, in our test area Verizon has a much wider throw than the GSM carriers, though the further we went from civilization, the slower our speeds went, which is to be expected. We have data coverage with the SGSIII in areas that we had only voice coverage with our GSM Galaxy Nexus.

One downside to note, in one particular area LTE coverage was somewhat poor, but the phone kept trying, then falling back to 3G which took a quite a bit of time and resulted in many “no network connection” messages being displayed. This only happened in one location, so we’re not too worried about it.

When using the phone as an actual phone, everything worked just as you’d expect it to: voice calls were perfect, probably due in part to Samsung’s in-call EQ settings; and the phone interface was fresh and very user-friendly. 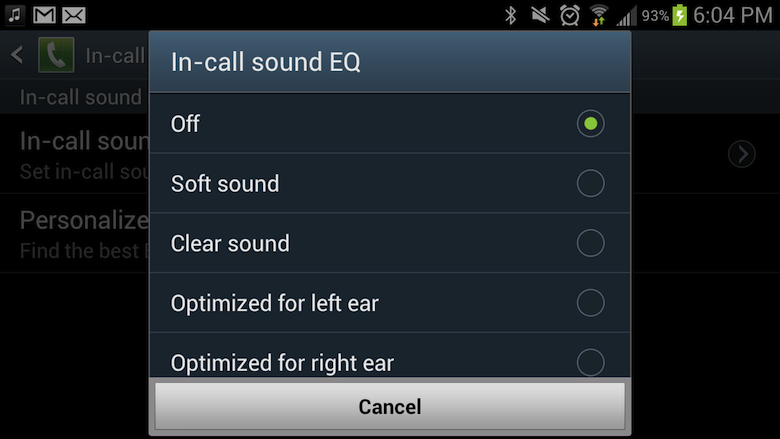 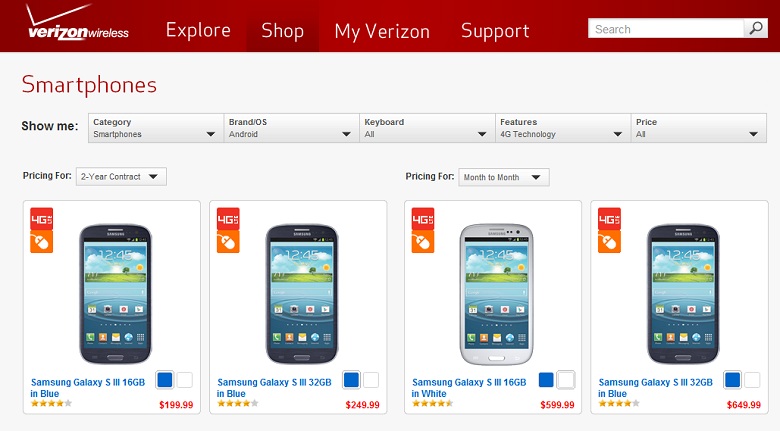 Verizon is offering two varieties of the phone (16GB and 32GB) in two colors (blue and white). None of the options are currently available in stores, as indicated by the little orange mouse icon in the image above, but you can get any variety from their website.

If you don’t have a smartphone, or your contract is up, or you’re wondering what phone to get, we’ll make things simple for you: get this phone. You might be also considering the Galaxy Nexus, which is also a great phone, but the Galaxy S III is better in almost every way.

Even though we found some faults with the phone (both the case and the software), they’re our honest observations — but none of them should prevent you from buying this phone. The Galaxy S III isn’t just a stand-out product, it’s probably the best smartphone available right now — on any carrier. Combined with the LTE speeds we experienced, this phone is reason enough to switch to Verizon today. 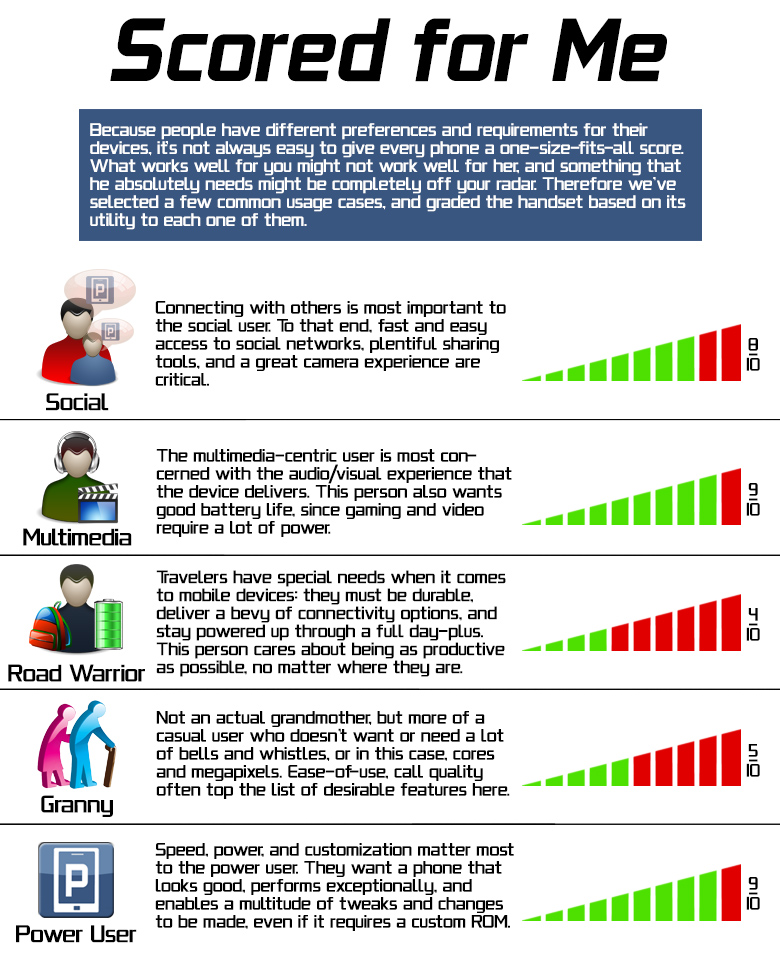