The Galaxy S III is one of the most highly anticipated phones ever. Samsung has had it right for several years now: they’ve created a recognizable, flagship brand that is so popular and sought-after that all major carriers in the world endeavor to sell it. The Galaxy S brand has also gotten them in a lot of trouble, as companies like Apple attempt to prevent Samsung from selling its handsets due to allegations of patent infringement.

Nevertheless, Samsung has sold tens of millions of both the Galaxy S and Galaxy S II. Their success has been a result of the combination of fantastic hardware, great displays, and stellar performance. Great advertising and far-reaching availability have also helped. It’s no wonder that with the launch of the Galaxy S III, expectations are sky-high, especially since Apple’s latest and greatest iPhone is just a small handful of months away. Read on for our full review of the Samsung Galaxy S III! 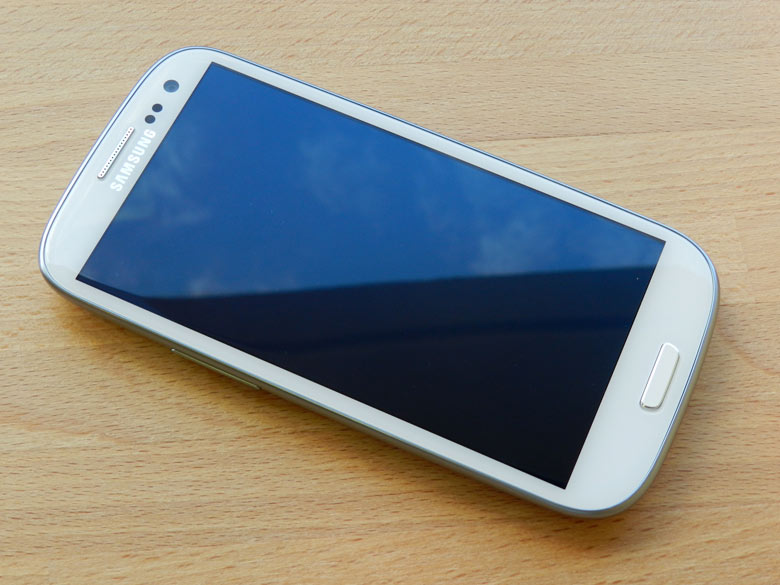 The Galaxy S III is a handsome device, that, more than any phone we’ve ever reviewed, is all about the screen. Even the physical home buttons seems to help to evoke attention to the display. Samsung managed to keep the bezel super thin. As with all Super AMOLED displays, it has a bluish tint to it both when it’s off and when it’s on. 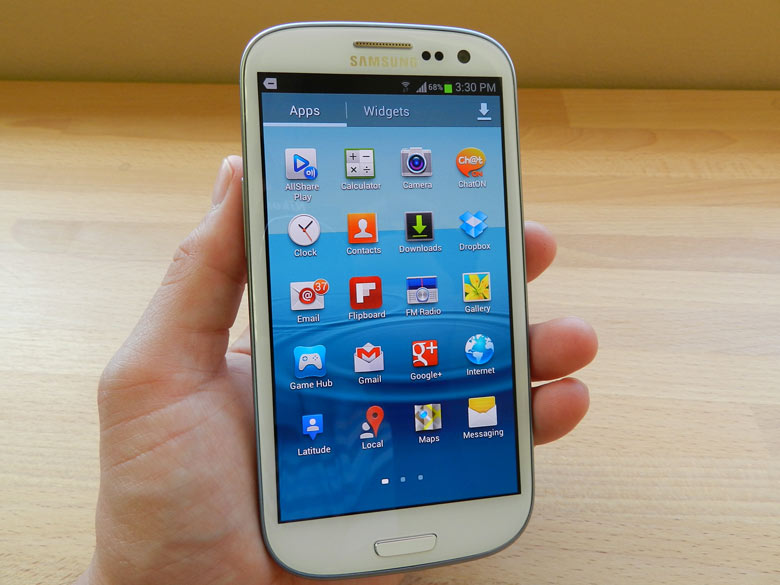 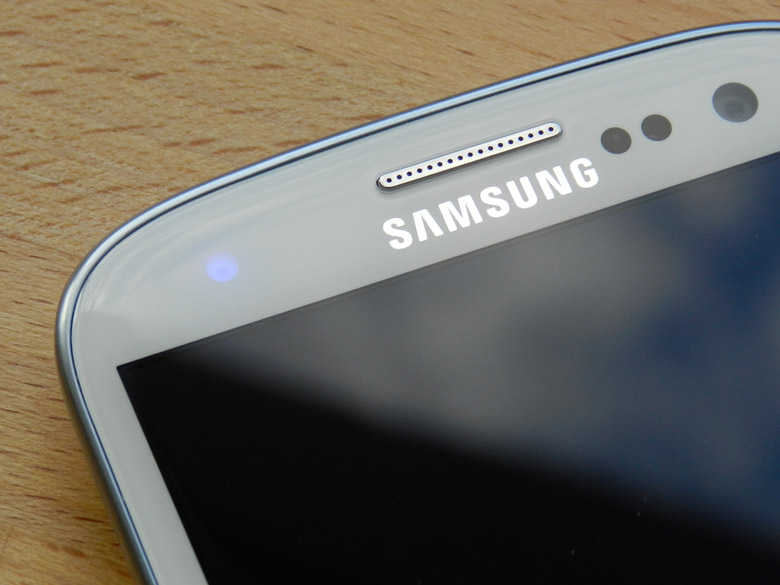 The Galaxy S III has a hidden LED Notification towards the top which can blink blue, green, and amber. It’d be nice to set different colors for different notifications, but you can’t do that out of the box. 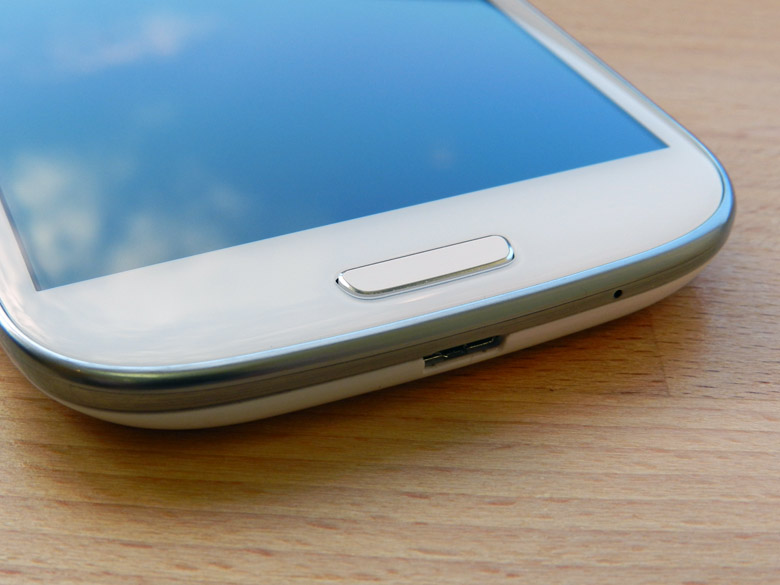 Like most previous Galaxy S devices, the Galaxy S III has a physical home button. This time it’s an elongated rounded rectangular shape. It’s elevated about a half milimeter above the surface of the phone, allowing you to feel for it without looking. It’s got a nice chrome border which echos the silvery outline of the facade. And while they’re hidden when not backlit, there’s a back button on the right and a menu button on the left.

Yuck! When illuminated, the capactive buttons look horrible, with an awkard lit border that extends beyond the actual buttons. 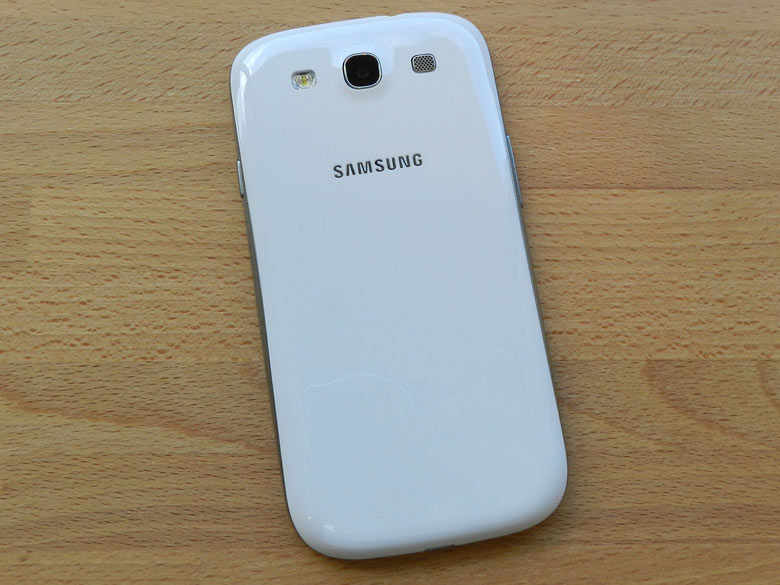 On the back there’s shiny plastic, and lots of it. Because of this, the Galaxy S III feels slippery in hand, especially if you have even slightly sweaty mitts. Back here we can see the 8MP camera, the flash, and the external speaker. 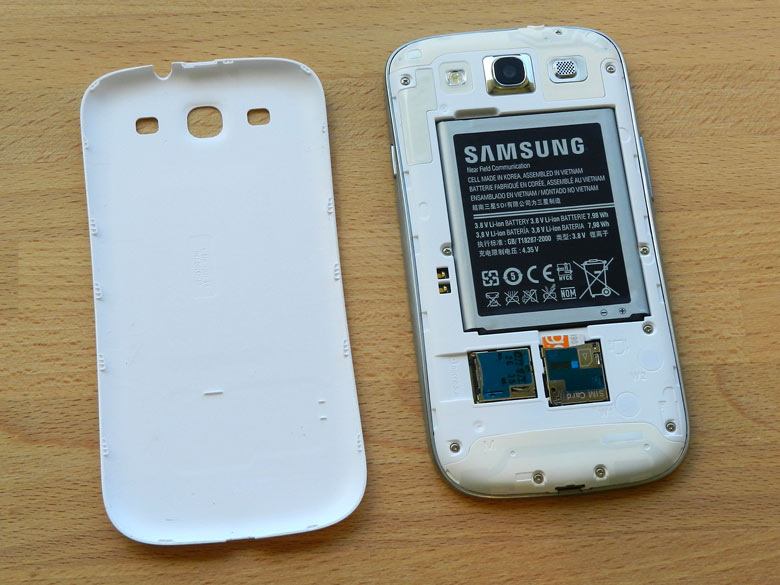 Behind the back battery cover we have the microSIM slot and microSD expansion bay. The 2100mAh battery is removable. 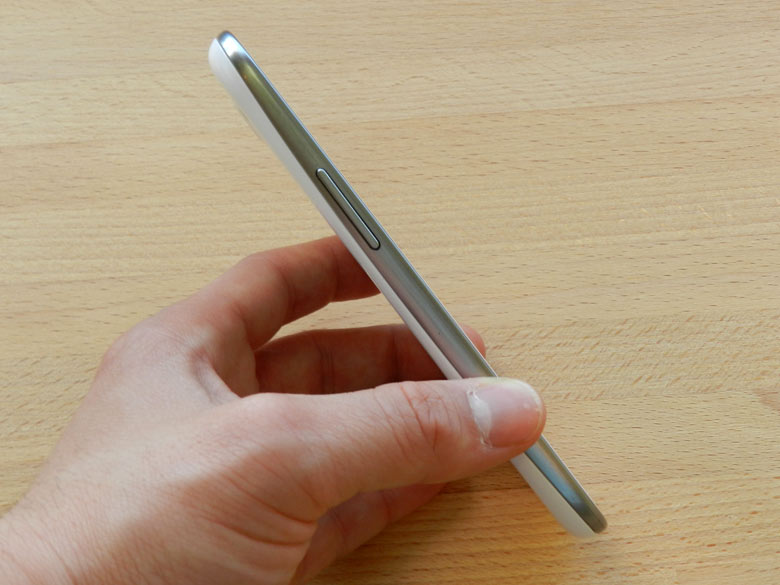 The silver border around the phone actually begins here on the side. On the left side of the device we have the volume rocker… 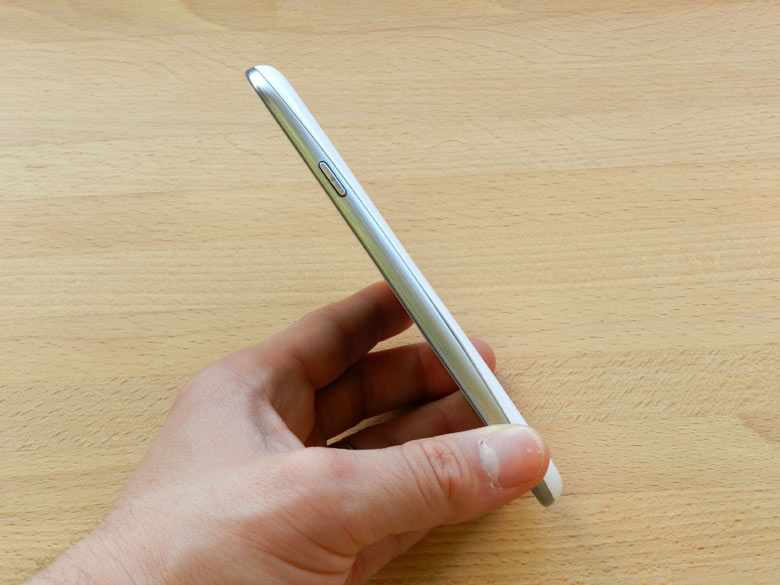 …while on the right side we have the power button. While the curved silver piece on the side might imply that the Galaxy S III is curved, it’s not. 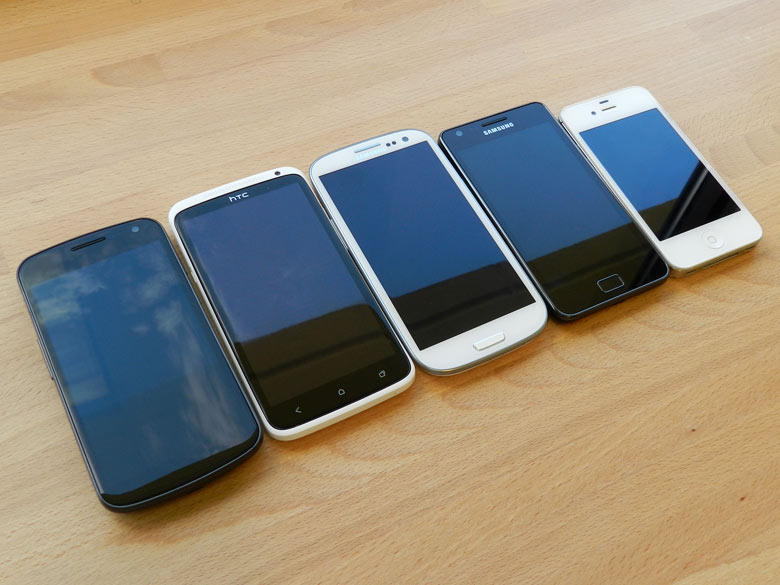 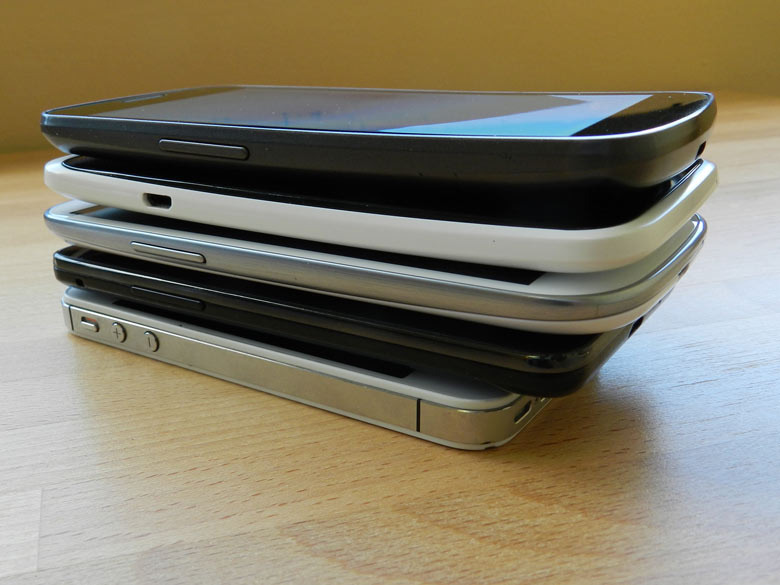 There’s no doubt that the Galaxy S III is thin. In fact, it’s thinner than every phone in this picture except its predessor, which was a tenth of a millimeter thinner. 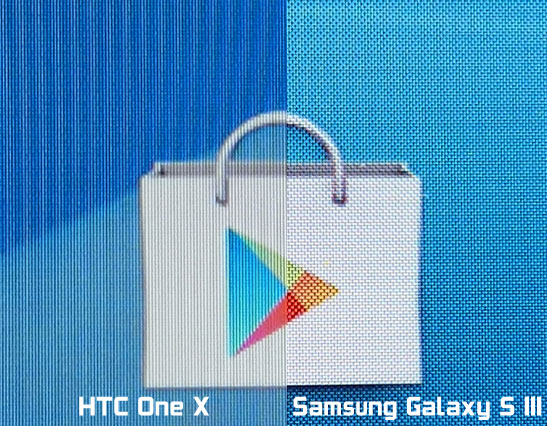 Don’t let anyone tell you if you get a phone with a pentile display, you won’t notice. Despite a healthy pixel density, the Galaxy S III still suffers from the pixelation ugliness that occurs due to shared sub pixels. That said, you have to be looking closely to see the side effects, but they’re there! 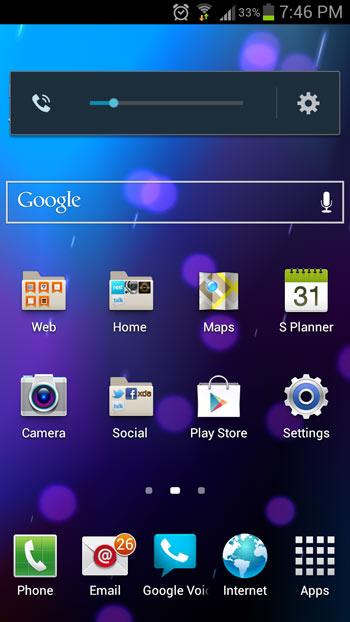 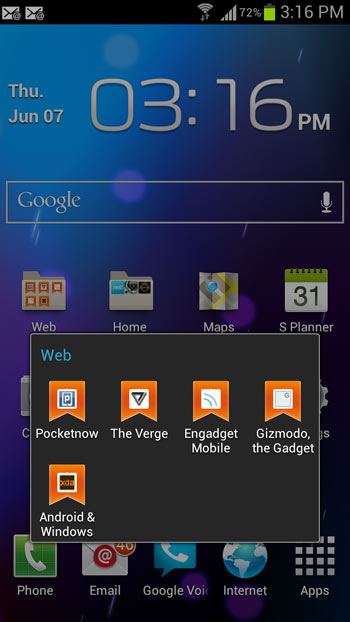 TouchWiz 4 generally maintains the look and feel of Ice Cream Sandwich like here on the homescreen. Unfortunately, Samsung didn’t carry over the fantastic workflow for making a new folder. You can’t move one icon on top of another to make a folder; rather, you must first make a folder through the menu button, then drag icons to the folder. Also annoying is the choppy animation of each folder when you go to open one. 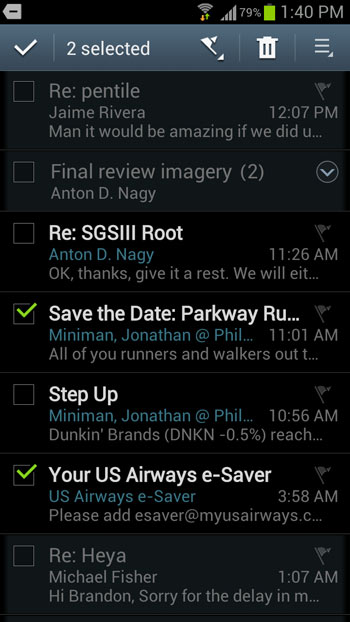 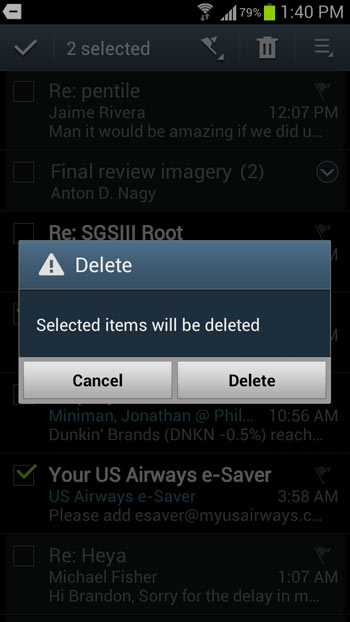 The email client is an absolute headache. Samsung should take note of what HTC is doing…the Sense 4 email client is second-to-none. If you multi-select messages, the action buttons (delete, mark unread) are at the top of the screen. This invariably requires you to use a second hand to hold the phone so that your other hand can reach the top of the phone to action on the messages. Not only that, but after you delete every message you’re presented with a delete confirmation dialogue, and there’s no way to disable it. What’s worse, Samsung hasn’t fixed the email delete bug that was present in previous Galaxy phones that cause emails to take 1-2 seconds to get deleted. Also, is anyone else tired of the black and blue color scheme? 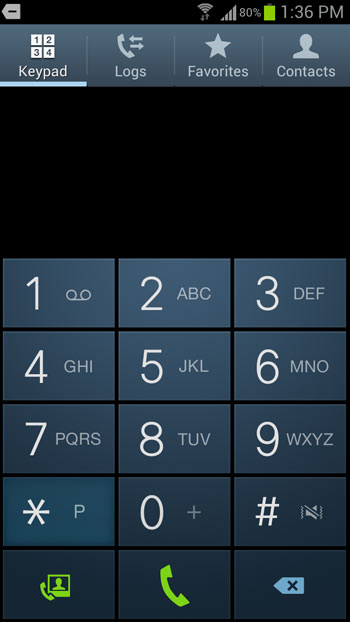 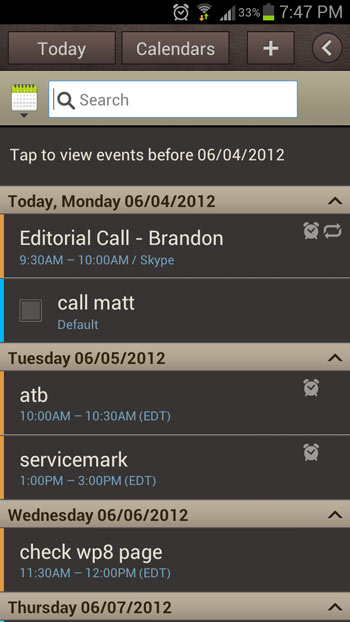 TouchWiz touches every part of the UI, including the dialer and calendar, shown above. We like what Samsung has done with the dialer, but question the use of skeuomorphs in the calendar app, and in other places. 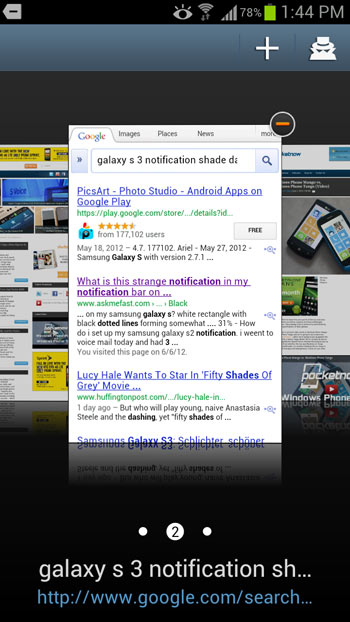 The web browsing experience of the Galaxy S III is a high point. Pages load quickly, navigation is buttery-smooth, and you can even pinch to access your tabs. 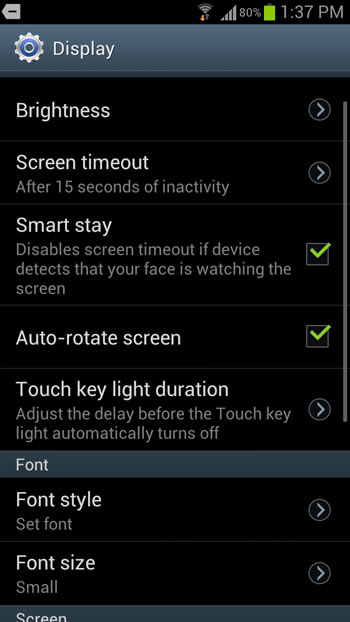 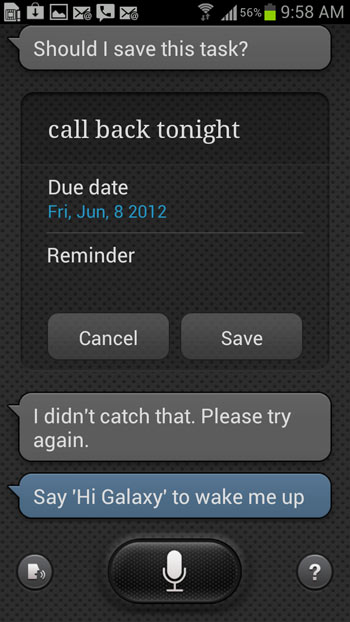 There are a host of what we’d consider gimmicky software features on the Galaxy S III that in most cases help to rob you of battery life. One such example is SmartStay, which actives the front-facing camera to see if you’re still using the phone when you reach the end of your screen timeout interval.

Then, there’s S-Voice. Yes, it’s a clone of Siri, but sadly, it’s not as good as Siri. We already wrote a post on the downfalls of S-Voice, but allow me to summarize: it’s inaccurate. It often gets what you say wrong, requiring you to repeat yourself. Sometimes, S-Voice will ask a question, but it won’t be “listening”, requiring you to hit the microphone button again. Also annoying is that out of the box, there’s an akward lag when you hit the home button from any app. This is because the Galaxy S III is “waiting” for a second tap of the home button, which is the default way to turn on S-Voice. If you disable this double-tap in the S-Voice settings, getting back to the homescreen becomes rocket fast, but then you have to manually engage S-Voice by finding the app. 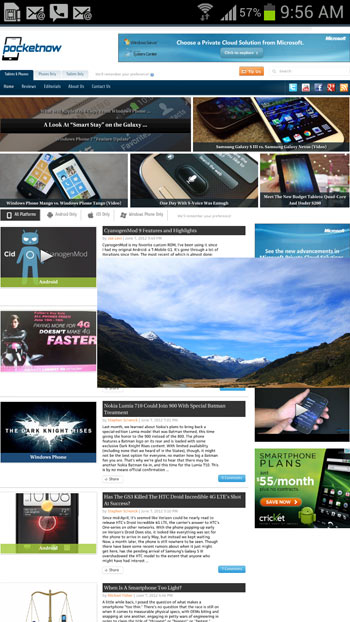 Then there’s a feature that lets you have a video “hover” above any app that you’re using. This is done by hitting the “pop out” button in the default video player. What’s frustrating about this feature is that it won’t work with Netflix, Play Movies, or any other third-party video player. Plus, we’re not sure whether there’s any merit in watching a movie while browsing the web. We found ourselves constantly having to re-position the picture-in-picture to avoid it obscuring certain UI elements.

The Galaxy S II took fantastic photos, and we’re happy to report that the Galaxy S III does likewise. In fact, we’d say that the Galaxy S III takes photos that are almost as good as the iPhone 4S, and certainly better than the HTC One X.
As you can see in the above video sample, colors are well-saturated, but even minor movements, such as those caused by walking, cause the video to come out shaky. Fortunately, there is an anti-shake setting in the camera app, which does indeed help a lot. This should be turned on by default.

There’s not doubt that the Galaxy S III is a fast phone. Its performance can be summarized thusly: slightly faster than the Galaxy S II. You would think that between generations of phones, especially when the number of processing cores double, phone performance would see a similar increase. That is just not the case. We’re obviously hitting a wall in terms of the incremental benefit of adding more cores to an Android phone. Maybe Android isn’t properly tuned for four core processors, or perhaps these multi-core chips are just not ready for prime time, and are just used as another point of differentation in marketing material.

Nevertheless, as mentioned, the Galaxy S III exhibits brawny performance, whether when opening an app, browsing the web or being quick to launch the camera app. It didn’t blow us away, but never were we kept waiting for the phone to catch up.

Below is a look at how the Galaxy S III performs in benchmarks (with HTC One X scores shown in parentheses).

Not suprisingly, the Galaxy S III has above-average battery life thanks to its huge battery. It’s a bit worse than the One X, but certainly much better than your average high-end smartphone. With moderate use, expect to make it through a full day, plus a bit extra on the second day. With heavy use, you’ll barely get through one day.

Seldom do we see improvements made to call quality, but we can say with certainty that the Galaxy S III provides the best call quality of any mobile we’ve ever tested. The combination of a secondary microphone for noise cancellation, a plenty-loud earpiece, and software audio equalization provides crystal clear calls.

We tested the Galaxy S III on AT&T in the US, and while it’s not intended to be used in this country (yet), it still works just fine. We clocked speeds of 2-4mbps down over HSDPA, with upload speeds of 1-2mbps. That’s pretty typical.

Where we were blown away was with the Galaxy S III’s WiFi performance. Standing close to a Verizon FiOS router that provides 35mbps down and up speeds, we were able to clock an amazing 33mbps down and 34mbps up using the SpeedTest.net application. WiFi strength was also above average.

vs. Galaxy Nexus
vs. iPhone 4S
vs. Galaxy S II
vs. HTC One X

If you want a Galaxy S III right this second, you’ll have to turn to an importer like Clove to get your hands on one in the US. In just a matter of weeks, though, the phone will hit carriers in the States, with T-Mobile and Sprint getting the GS3 on June 21. AT&T and Verizon have yet to confirm when retail sales will begin, but have provided some info on when pre-orders will start shipping.

The Galaxy S III was overhyped, both by Samsung and by the media. This hype caused expectations to be sky high, but for good reason: this is Samsung’s preemptive answer to the next iPhone, the next high-end HTC, and so on. Did it deliver? If you consider the cons listed above, most of which are issues relating to software (which can be updated or changed), we have to say that no, the Galaxy S III didn’t deliver. But thanks to the beautiful design, great day-to-day performance, superb call quality, and wonderful camera, we can confidently recommend the Galaxy S III for those looking for the best smartphone experience possible. 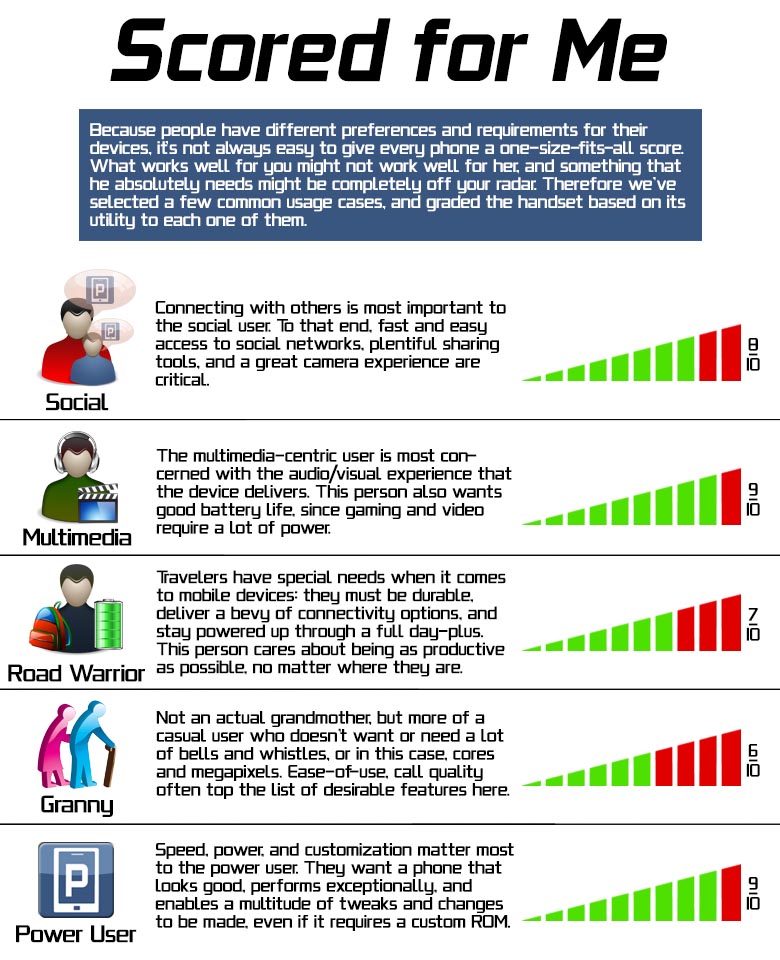 This article lists nine smartphones options from Oppo’s catalog to help you pick one suited to your needs.

A number of new case renders reveal how the S Pen can be attached to the Samsung Galaxy Z Fold 3 foldable flagship device.

Today’s best smartphone deals come from Samsung.com, where we find the Samsung Galaxy S21 series, the Galaxy Note 20, and more on sale

We keep on getting amazing deals from Amazon, Best Buy, and more, where we find the…