Samsung Galaxy S 5: What to Expect

Now that mystery and uncertainty has been lifted from the Samsung Galaxy S 4, it’s time to start pondering about what Samsung has in store for us next. Some might cry foul, that it’s somehow “not fair” or “inappropriate” to start talking about what’s coming next when the current version isn’t even available yet. We hear you, but you’re wrong — but not for the reasons you may think.

There are an infinite number of improvements that can be made or features that can be added to any product. Those, of course, are limited by pesky things like cost, availability, durability, and sometimes even physics. Not to mention market demands. Many of these items are placed onto a wish-list of sorts. Some of the items on that list are scheduled for development and eventual inclusion on a certain generation of devices. Others have to be pushed down the road to a future product. The product in this case is the Galaxy S 5.

I don’t have access to that list, nor am I even aware that it exists in any physical form, but believe me when I tell you that features, specifications, wishes, and more were not included in the final project — and someone’s going to put at least some of them into the next one.

To start off with, one of the features available in other smartphones today wasn’t include in the SGS4: wireless charging. We can debate all day whether or not wireless charging is a good thing or not, but for whatever reason, Samsung didn’t include it — but they will have accessories to enable it. Some might think this was done to save money on the original product, others could conclude that Samsung is in the accessory business. Both are likely correct. Unless there’s a significant shift in consumer demand for wireless charging between now and when the SGS5 is spec’d out, we probably won’t see wireless charging in it either.

You might be excited that the SGS4 has an “octo-core” inside it. It doesn’t. Instead it’s got two sets of four-cores married together. This should help with performance and battery life — or so we’ve been told. But don’t be fooled into thinking it runs eight cores. It doesn’t.

Will the SGS5 include a deca-core or hexadeca-core, or even a true octo-core? Probably not, but have no doubt, Samsung will ramp up the speed from the 1.6GHz that’s included in the 4 to 1.8GHz, or even 2GHz or beyond in the SGS5.

The SGS4 is running the latest version of Android: 4.2.2. The SGS5 will run Android 5.0. What features that will bring is anyone’s guess, but it will be the latest and greatest, with TouchWiz layered on top.

Samsung will continue to push the envelope with new and innovative software features and enhancements that aren’t included in the “stock version” of Android. Some will be novel, some will be useful. Some won’t be.

When we were musing about what might be included in the SGS4 (just after the SGS3 was announced), we thought it might have a a full-HD 1080p display. We were wrong, but only by one generation. The SGS5 is going to keep the same 1080P resolution, though the screen will look even better, and may be even bigger than 5-inches. They’ll accomplish the increase by shrinking the bezel rather than increasing the size of the phone.

After 1080P is 4K. We don’t suspect we’ll be seeing 4K displays on our smartphones any time soon.

With Google pushing hard for cloud storage and Samsung cranking out phones that work on almost every band and carrier in the known universe, it may come as somewhat of a surprise that on-device storage is still as large as it is on Samsung phones. What’s even more odd is the inclusion of an sdcard slot for expandable storage. This is one of the areas that differentiates Samsung devices from many others, especially Google. The SGS5 will have even larger internal storage, and they’re not going to get rid of that external storage slot any time soon!

RAM seems to have stagnated at 2GB for a while. The speed of that RAM, however, has been steadily increasing. Watch for a fast 4GB RAM module to be released in the not-too-distant future, with that chip being featured prominently in the SGS5.

When predicting the SGS4 we thought it would have a 12-megapixel rear shooter, we were close! The SGS4 one-upped that: 13-megapixels. That is 5 megapixels more than the SGS3’s 8MP shooter. We’ll go out on a limb and predict another 5MP jump on the SGS5: 18MP! 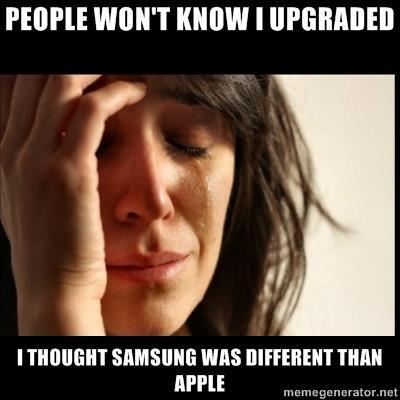 Samsung has a knockout-design right now. It does what it needs to do and looks pretty good doing it. We almost universally hate hyper-glaze, regardless of the material that it’s covering (plastic or polycarbonate).

What Do You Want?

Now that you’ve heard what we have to say about the Samsung Galaxy S 5, what about you? What do you want to see in the SGS5 that’s not in the SGS4? What would it take for you to upgrade to such a phone? Let us know your thoughts and comments below!