I’ve had a lot of weird phones cross my desk lately. Some of them were good in a weird way, and some were just weird in a weird way. But every one of these phones had something in common. I believed in the weird. I thought the weird added a tremendous amount of value to the device, and I wanted to explore it and see for myself that my vision was correct. This was true for every single phone, except one. The Samsung Galaxy Note Edge.

When we first looked at this phone at IFA back in September, I laughed it off. Dumb Samsung trying to throw stuff against the wall, just to see if it sticks. It’s ridiculous. Who would want this thing? What about left-handers?

But, here at Pocketnow, I’m becoming the go-to guy for weird phones, so that being the case, I knew I had to get my hands on it. I did not believe in this weird. But I had to see for myself what it was all about. So let’s see how things panned out, shall we? 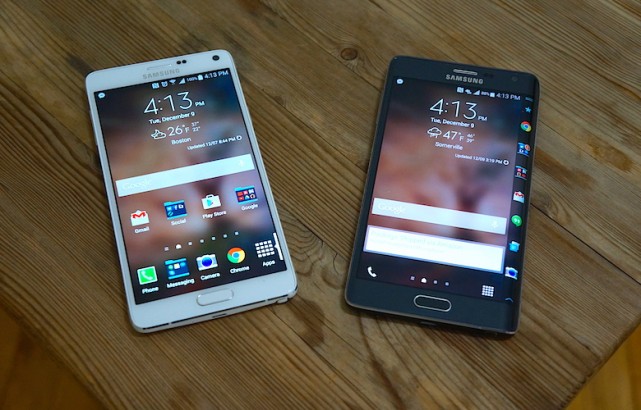 Looking at the first three words of this title, you get a feeling for how the first part of this review is going to go. It will be a brief overview of the “Note” part and not the “Edge” part. The Note part is the same as just about every other Note review you’re going to read. To sum up:

This is all the standard stuff. I’ll get into more detail about all this, but I just wanted to let you know, if you’re looking at this phone, you are looking at it for the Edge part, not the zz part.

Right off the bat, I’m going to compromise my career at Pocketnow by contradicting Michael Fisher. The Note Edge does not look like a traditional smartphone. But rather from detracting from the value, I’m going to do a complete 180 and say I like how the Galaxy Note looks. The Edge on the right side of the screen does give the Note Edge an asymmetric look. It has been described as looking like an airplane wing. All that is just fine.

The right edge (the Edge side) does have that curved screen that goes down to the bezel. At that bezel, your fingers will find another edge – one of the gripping variety. Samsung has built a lip into the Edge because let’s face it, you need to hold the phone somewhere. But this edge gives you a comfortable and reassuring grip on the phone that isn’t present on other phones. Maybe it’s just my fat fingers, but feeling that edge dig into my fingers gave me a sense of tactile security. This phone ain’t going nowhere.

Of course, because of this, the power button has to be on the top of the phone. That is the one major downside in the hardware department. Having the button on the very top of any already silly-large phone does make for some interesting phone-acrobatics to get the thing to sleep, or power it back on. 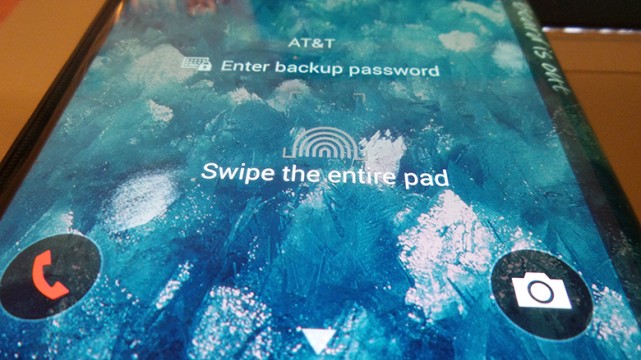 Also present are the two sensors that shouldn’t be – the heart monitor and the fingerprint scanner. The heart monitor is just something that I don’t think needs to be on a phone. I’m just going to leave that statement right there. There may be a point to having it, but I’m not the audience for it. Maybe you are. Congratulations.

The scanner was on the inconsistent side, only successfully reading approximately 75 – 80 percent of my swipes. I was either too fast, too slow, off center, not swiping the whole pad; you name it, Samsung complained about it. The times that it worked, it worked fine, but there were too many times I just couldn’t unlock the phone within 5 attempts, and that’s ridiculous.

Other features of the phone from the capacitive buttons and physical home button on the face, the volume rocker on the side, and the not-quite-softouch-but-still-really-nice back were all right in line with expectations for a quality piece of hardware. 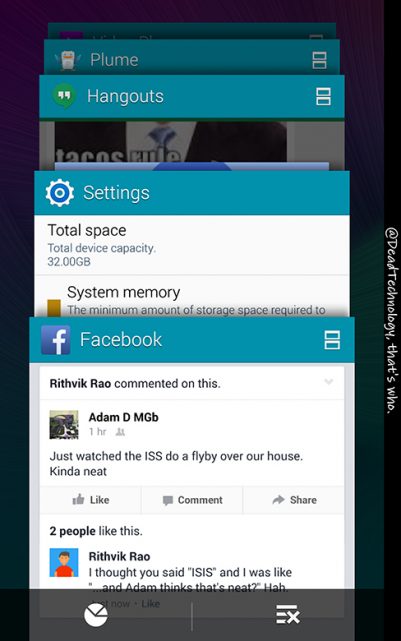 Getting inside the phone, we have the latest iteration of Touchwiz. Believe it or not, there were some aspects of Touchwiz that I really missed while away from Samsung phones, and some new things here that I will miss. Right off the bat, the multitasking on the Edge is very lollipop like with the rolodex of cards style. Further, Samsung added a feature I’ve been pining for since…well forever – a dismiss all button. The clouds part and the angels sing!

Maybe I’m a little on the OCD side, but sometimes I just don’t want a whole stack of cards in my task switcher. Before you ask, yes, I was like that on webOS too even though that seemed like it was defeating the purpose. Overall though, I really wanted Android Lollipop to have that dismiss all button, but it doesn’t. The Note does. Whoop whoop!

Aside from that you have a whole suite of features to play around with. S-health is the big one that Samsung is pushing. This all-in-one health fitness tracker is probably a wonderful piece of software for someone who…what’s the word I’m looking for…cares. But like my fellow reviewer, Mr. Fisher, I’m just not into that whole healthy exercise lifestyle. So please stop reminding me every hour to go take a walk! Didn’t take long for me to turn that thing off.

This in and of itself is not innovative. Lots of devices have had the stylus built in. The reason for this is the reason why wearables are so great in my opinion. The stylus is always there. You don’t have to use it daily to justify its existence. You only have to use it a few times, when it’s the right tool for the right job, to get why the stylus is a great thing.

The things that is does, it does remarkably well. The things it doesn’t do well, it gets stored for, easy peasy. You’re not going to want to screen capture and draw every day. You probably won’t want to do it every other day. You’re not going to want to use it to launch an app, or scroll through menus. But when you do want to do some of the tasks it does exceptionally well, it’ll be there. You don’t have to use it often to appreciate its utility. 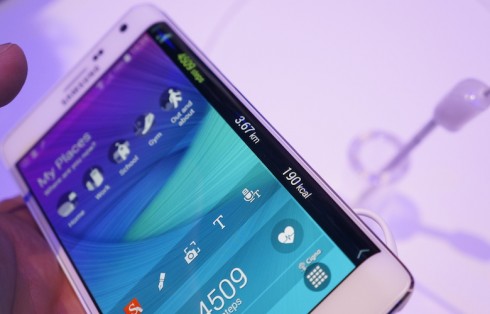 Now, we get to the meat of this review rebuttal, and the point on which I think I differ from Michael the most – the Edge. After everything, is this edge worth it? I’ve already shown you three fun things you can do with the edge. That’s all fine and good, but is the Edge worth the weird? That I can answer with an emphatic and unequivocal YES!

The Edge puts a lot of your controls within your thumb’s reach, which makes using this big boy one-handed a lot easier. It also adds a lot of extra space to areas like your home screen and camera view finder. Suddenly, you have a place to put buttons that simply didn’t exist before. So it’s adding real estate for that, plus making things easier to reach. This is kind of a big deal.

Moreover, the edge allows you to get notifications, play games, or check weather or stocks (if that’s your thing) without having to interrupt what you’re doing on the screen. Michael showed off the ability to watch a video, open twitter, and check sports scores he cared nothing about.

It allows for fast app switching because all of your quick launch icons are in an edge panel, not on the home screen, so it’s also a time saver. In the beginning of my review period, I often pressed the home button to launch a different app, then smacked my forehead because I forgot I didn’t have to do that any more. When I move to another device with no edge, it’ll be interesting to see how I handle that transition. 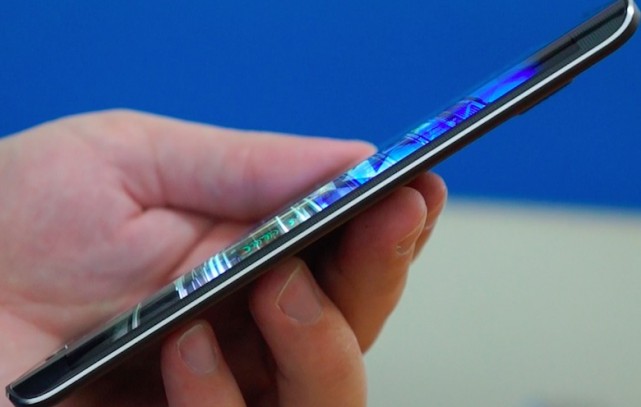 But while I’m heaping all these praises onto this feature, it’s worth noting that the edge is not perfect. There are inadvertent touches – most notably when holding/using the camera. There are also times when you’ll touch an icon on the edge and it simply won’t react. That takes me back to my webOS days actually.

But these are all things that can be tackled either in software, or even or further hardware optimization. Which is why I really hope there is a Galaxy S6 Edge. I also hope that it’s not an “oh by the way, there’s this phone too” iteration of the S6 like the Note Edge was. This phone design can be a flagship, and not an outlier.

The Galaxy Note Edge does not look like a traditional smartphone, and that’s ok. The Edge adds a ton of flexibility and utility to a phone that already has a ton of flexibility and utility. It’s an innovative design that is scoffed at by traditionalists who see the asymmetric design as a flaw, not a strength. True innovation often has to be dragged through the doors, often kicking and screaming. It so happens, I would embrace such a shift in the industry, but then I do dig me some weird phones.

This device won me over. I was very skeptical of the edge when it was introduced. Now, having used it, I want it on every smartphone from now on. This could be the birth of a new trend.