Deals keep on coming to the Samsung Galaxy Note 9, now on an unlocked version with dual SIM capabilities and an extra deal is also available
Published 27 August 2018, 09:46 EDT

The Samsung Galaxy Note 9 has just arrived and it has tons of deals in several networks. Now, if you want a factory unlocked version that also supports two SIM cards, this is a deal is for you.

The regular price of a Samsung Galaxy Note 9 is of $999, but you can get it for $70 off in eBay right now. This is a very straightforward deal. It offers you an unlocked unit that doesn’t support CDMA, but it can work perfectly on Verizon’s or Sprint’s LTE networks. AT&T and T-Mobile users won’t have any issues. The processor in this Note 9 is the Snapdragon 845 and 6GB of RAM complete the package. You can also get Samsung’s Super-Fast wireless charger at just $100 since it has a $20 discount. 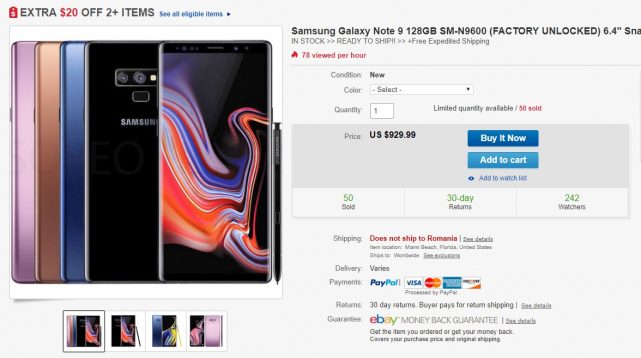