Just so there is no confusion, mystery, secrets or hopes for last-minute changes, Galaxy Note 8 specs are set in stone by a fresh benchmark file.
Published 15 August 2017, 05:26 EDT

Just in case you were hoping for some last-minute surprises or changes to that “final” ev-leaked Samsung Galaxy Note 8 spec sheet from a couple of weeks ago, a new GFXBench information file has surfaced online earlier today.

This only corroborates everything VentureBeat’s Evan Blass exclusively revealed for the first time back in June, with a few bits and pieces also “confirmed” in a pair of recent Geekbench visits measuring the phone’s comparative performance when packing a Snapdragon 835 and Exynos 8895 processor.

Once again, we’re looking at the “international”, Exynos-powered variant benchmarked ahead of its probable September release, with 6GB RAM and 64GB storage space also in tow, of which around 5.2 and 53 gigs will apparently be user-accessible. 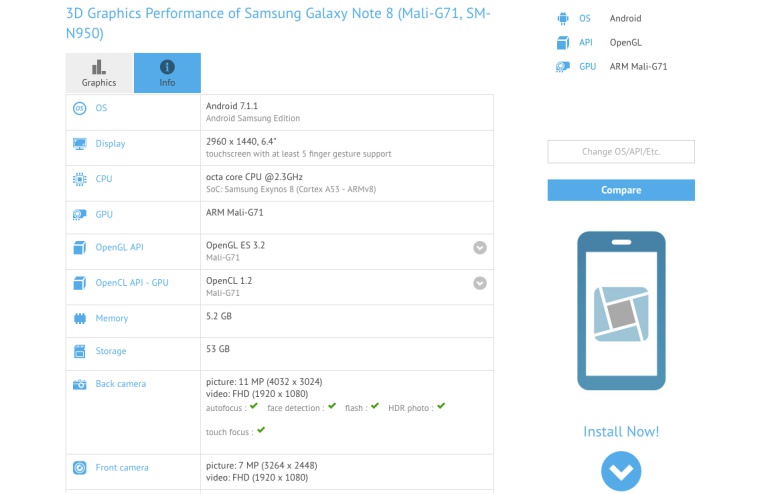 Android 7.1.1 Nougat runs the software show, as Google’s platform build O will likely not be “optimized” by third-party OEMs soon enough. Only one 12MP rear-facing camera is listed, although we know for a fact there are two of them in the pipeline, with a single 8MP front shooter taking care of your self-portrait needs.

No mention of the reportedly “conservative” 3300mAh battery under the hood ensuring both decent autonomy and complete safety, with other unspecified but virtually guaranteed features including iris and facial recognition, enhanced S Pen capabilities and the same awkwardly positioned fingerprint scanner as on the GS8.