Samsung has just announce the Galaxy Note 8.0 tablet. Check out just what the hardware’s going to look like, and learn about when you’ll be able to buy one.
Published 23 February 2013, 21:00 EST

The idea of a mid-sized Galaxy Note tablet has been kicking around for a while now, and last month we heard rumors that this Galaxy Note 8.0 might make its debut during the Mobile World Congress. That sentiment was later echoed by a Samsung exec, and after seeing some Note 8.0 signage up at Samsung’s booth earlier today – well, the tablet was already feeling as good as launched. Sure enough, tonight Samsung followed-through on all those teases and has now officially announced the Galaxy Note 8.0 with S Pen stylus.

Samsung says that the idea around the eight-inch version of this tablet is to expand upon the level of productivity you can get when working with a stylus-based device like the Note II, while still keeping it petite enough to fit in a (large) pocket.

The Galaxy Note 8.0 will run a 1.6GHz quad-core chip, presumably the Exynos 4 Quad like in the Note II, have 2GB of RAM, and be available in either 32GB or 64GB configurations, both supporting microSD expansion.

The tablet has an eight-inch display, as per its name, which will be in a 1280 x 800 resolution. The main camera is a five-megapixel component, and you’ll get 1.3 megapixels up front. Power comes from its 4600mAh battery.

So far, the Note 8.0 that’s been announced is 3G-only, but Samsung has yet to reveal details specific to the tablet’s availability in the US, so LTE could still be on the table there. Somewhat unusually for a tablet this size, the Note 8.0 will support voice calls, at least in certain markets.

While Samsung says that the Note 8.0 measures 210.8 x 135.9mm, and weighs 338 grams, there’s no word on its thickness – as you can see below, though, it seems pretty slim, with the exception of its camera bulge.

The Galaxy Note 8.0 will first be available sometime in the second quarter of the year, and will arrive running Android 4.1.2 – no word yet on a confirmed price. 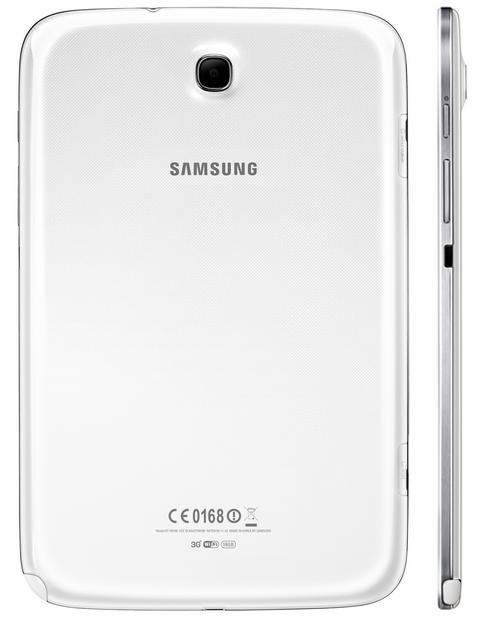