Samsung’s refurbished Galaxy Note 7 has been a long time in “consideration”, finally going on sale in Korea today under the Note FE name.
Published 07 July 2017, 05:00 EDT

The tale of the refurbished Galaxy Note 7 has been a confusing and controversial one, as the originally far-fetched theory was seemingly put to rest by Samsung, then officially “considered” for months on end.

Now, with a reportedly redesigned sequel around the corner, the Note FE, aka Fan Edition, is finally rolled out in Korea in “limited quantities”, no pre-orders, no fuss, no hype.

The reconditioned S Pen-wielding Android powerhouse isn’t even advertised on the homepage of the chaebol’s domestic website, with a snazzy Rose Pink Galaxy S8+ stealing the spotlight, alongside the Galaxy Tab S3, various QLED TVs, air conditioners and the Gear S3 smartwatch.

Thus, we’re guessing this re-release isn’t deemed such a big deal by the global smartphone market king, although “fans” are told repeatedly the compressed 3,200 mAh battery is safe to use, clearing a new 8-point check. 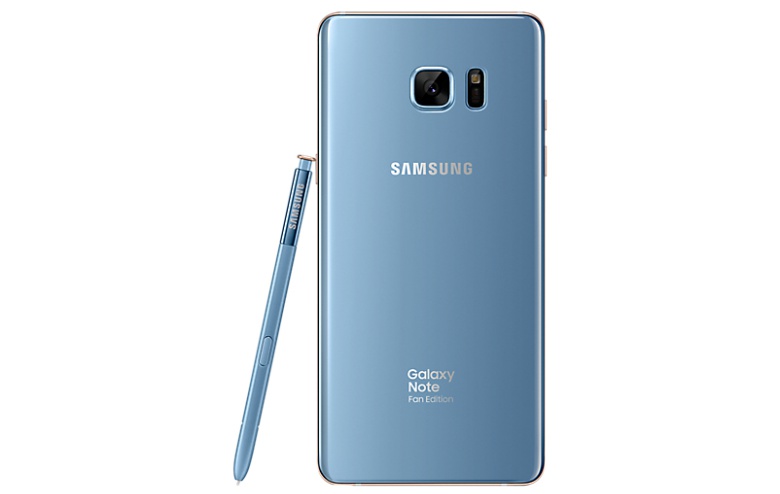 Existing processes, like battery durability tests, visual inspections and X-ray tests, have been enhanced to avoid a repeat of last year’s explosion fiasco, with other measures implemented for the first time to guarantee reliability.

Priced at the rough equivalent of $610 (699,600 won), the Samsung Galaxy Note FE is largely identical to the original Note 7 that used to cost around 300K won more. The dimensions are the same, the overall specifications likewise, and the only noticeable design change is the name on the back of the device.

Also, while Samsung is keeping mum on the matter, local media reports partial Bixby functionality is added to the mix. No voice support, apparently, and no dedicated launch button, though the latter may actually be a feature rather than an omission.

Samsung is yet to announce the Exynos 880 SoC.