We’re probably less than two months away from the commercial US launches of the Samsung Galaxy J7 V and Galaxy Tab S3, as hinted by new renders.

With the ultra-high-end Galaxy S8 most likely still a ways off, Samsung is apparently currently focused on getting a number of tablets and low to mid-end smartphones ready for primetime at and shortly after MWC 2017.

Already rendered based on factory CADs back in December, then benchmarked and rumored for AT&T, Verizon and US Cellular availability last month, the Galaxy J7 (2017) handset moves one step closer to a formal announcement and commercial launch today with an actual high-res press-friendly product image courtesy of @evleaks.

Predictably dubbed Galaxy J7 V on Verizon, the plastic (and metal?) 5.5-incher doesn’t look half bad in elegant black coating… for a budget-friendly device, also coming to Tracfone as the J7 Sky Pro, presumably sometime in April. Specifically, on the 10th, as suggested by the date featured on the rendered phone’s lock screen. 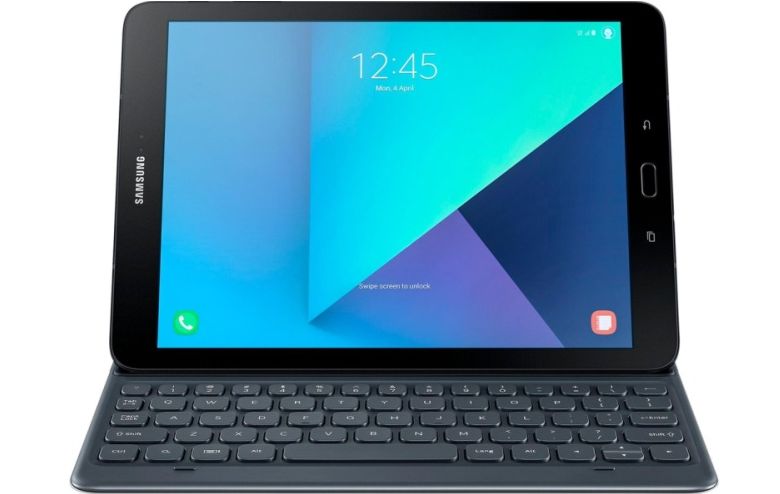 Meanwhile, although we still expect that long overdue Samsung Galaxy Tab S3 to break cover this Sunday, February 26, a similar hint is seemingly dropped by Evan Blass on Twitter as to an April 4 commercial debut. With LTE connectivity in tow, we’re guessing, for several US carriers, and a rendered detachable keyboard cover that isn’t quite what we were hoping for.

But maybe this isn’t the lone productivity-enhancing accessory you’ll be able to attach to a keyboard dock port strongly resembling that of the Windows-powered Galaxy TabPro S. It’s obviously not easy to design a “full-size keyboard” with a nice touchpad and everything for a 9.7-incher, but Samsung can certainly do better than this.