Hot on the Galaxy Note 8’s heels, the Samsung Galaxy J7 Plus looks just about ready to go on sale in Asia with dual rear cams in tow.

Samsung may have finally opened the dual camera floodgates after the highly anticipated Galaxy Note 8 announcement, reportedly cooking up at least two lower-end phones with two rear-facing shooters apiece, one of which just popped up in Thailand of all places.

No doubt headed to China and other Asian markets as well, this Galaxy J7+ fittingly resembles the single rear cam-sporting J7 (2017) in its general appearance while switching a few key specs around.

With a premium metal unibody build, the 5.5-incher should be relatively but not extremely affordable, launching sometime soon in black, gold and pink color options. An unspecified octa-core processor (Exynos 7870?) will team up with a generous 4GB RAM to provide more than adequate performance in everything from web browsing to multimedia consumption and even pretty hardcore mobile gaming. 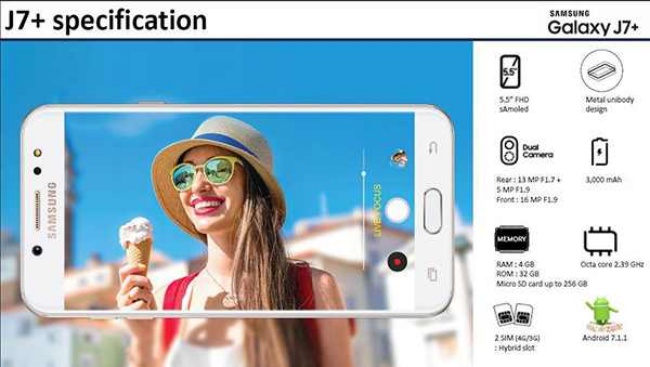 Of course, the Samsung Galaxy J7+ is shaping up to be a respectable cameraphone first and foremost, with a pair of 13 and 5MP snappers on its back integrating f/1.7 and f/1.9 aperture respectively.

The single front-facing cam on the J7 Plus is no pushover either, at 16 megapixels, and Bixby support is yet another feature borrowed from Samsung’s latest flagships. Expected to run Android 7.1.1 Nougat on the software side of things out the box, this mid-ranger also has Full HD screen resolution, dual SIM and microSD going for it, as well as 32GB internal storage space. Too bad the battery isn’t larger than 3000 mAh.