Keep the Samsung smartphones coming! Even without a major trade show in sight for a couple more months, Samsung isn’t about to slow down its smartphone release schedule to conform with the general lull in new smartphone announcements. Today, for example, it has taken the opportunity to unveil two new smartphones. The Samsung Galaxy J5 and Galaxy J7 are the manufacturer’s first two smartphones to feature front-facing LED flash modules – which means your selfies are about to be upgraded to a whole different level.

These two smartphones have been the subject of various small leaks over the past few weeks, so we’ve known to expect them. So let’s cut right to the chase: yes, that’s a front-facing LED flash, and yes, that flash is meant to work with the 5MP front-facing camera on both models to empower your #selfies, if that’s the kind of thing you’re into.

Don’t let that fool you into thinking these phones are incapable sans the front camera features, though. They won’t win any awards for performance anytime soon, but they do offer specs like 1.5GB of RAM, 16GB of expandable internal storage, 13MP rear-facing cameras, 720p displays (5 inches on the diagonal for the J5; 5.5 inches for the J7), and a beefy battery (2,600 mAh for the J5; 3,000 for the J7).

Both run Android 5.1 Lollipop, and will ship in three colorways (black, white, and gold) in the Chinese market first. The J5 will sell for 1,398 yen (about US$225), with the J7 moving up to 1,798 yen (around US$300). There’s no word on availability spreading to other markets anytime soon … but our fingers are crossed. 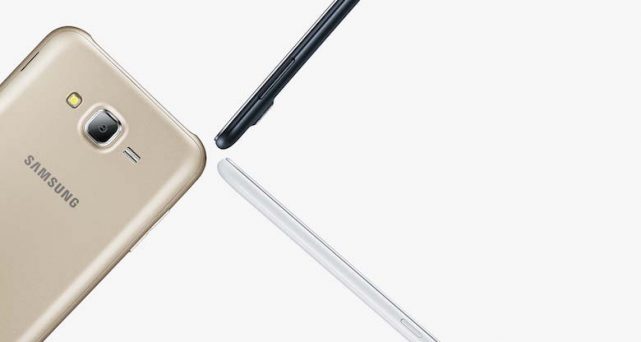