One of Samsung’s most popular smartphone families is about to get a new member. Make that two families, and two fresh additions to both the high-end Galaxy S and mid-range J lineups.

But while we’ve seen the 2017 edition of the Galaxy J7 rendered, benchmarked and rumored for an unusually wide US launch, there wasn’t much we could tell you about the Samsung Galaxy J5 (2017). All of a sudden, the no doubt budget-conscious next-gen handset has surfaced in both Geekbench and GFXBench databases, laying a number of key specs out in the open.

Just like the 2016 J5, aka SM-J510, this SM-J530 device appears to pack 2GB RAM, and accommodate 16 gigs of content internally. The rear-facing camera is also probably unchanged, at 12 (or rather 13) megapixels. But surprise, surprise, there’s now a 12MP (or 13) selfie-focused shooter too, replacing last year’s humdrum 5MP secondary cam. 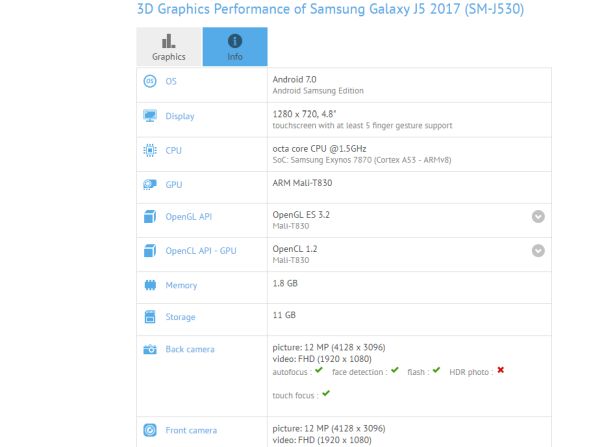 Under the hood, the Galaxy J5 (2017) upgrades its predecessor’s mediocre quad-core Snapdragon 410 processor to an octa Exynos 7870 that actually powered the J7 last year. You get a respectable Mali-T830 GPU this time around instead of Adreno 306 graphics, though weirdly enough, the HD screen may shrink down from 5.2 to 4.8 inches.

That’s probably not a bad idea, given the shortage of decent diminutive smartphones these days, and of course, you can count on Android 7.0 Nougat running the software show out the box.

You should check your new Google Pixel 5, to see if it’s not one of the devices to arrive with a gap between the display and frame

Can’t pick one between Apple’s new iPhones? This iPhone 12 Mini vs iPhone 12 comparison will help ease the dilemma!

I bought a Surface product so that you don't have to.

The new features are rolling out to users across both iOS and Android.

It comes with a metal mounting frame that can be attached to a stand or microphone arm.

In India, the readjustment includes an equalization levy of 2% in addition to the…