Samsung is unlikely to bring anything besides the hotly anticipated Galaxy S9 and S9+ to Barcelona for an MWC 2018 debut next Sunday, but down the line, the global smartphone market leader is obviously planning many other product launches.

One upcoming device you may have a little trouble taking seriously carries the model number SM-J400F, which suggests an official name along the lines of Galaxy J4. Unfortunately, we can’t be 100 percent sure of that after the SM-A530F and A730F recently went official as Galaxy A8 (2018) and A8+ (2018).

Whatever the SM-J400F is, it’s not out in stores yet, although it could bear quite a strong family resemblance to the Galaxy J3 (2017), aka SM-J330F. The two seem to share a modest quad-core Exynos 7570 processor, as well as 2GB RAM, which makes us hopeful of an ultra-low Galaxy J4 (2018) price point. 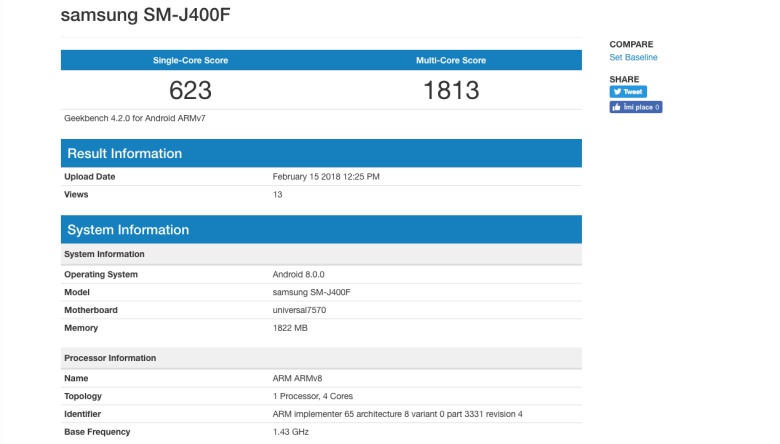 The only other thing the first ever SM-J400F benchmark listing reveals is Android 8.0 Oreo software, already running on the pre-release prototype that was able to score around 1800 points and a little over 600 for Geekbench multi-core and single-core performance respectively.

It’s certainly worth remembering Samsung is still having a bit of trouble officially updating the Galaxy S8 and S8+ to Oreo, while the A8 (2018) and A8+ (2018) were recently released on Nougat. This presumed Galaxy J4 just got a lot more exciting, don’t you think?