New generations of low to mid-end Samsung Galaxy J3 and J5 smartphones are coming soon, and we already know a lot about them.
Published 24 April 2017, 03:53 EDT

The recent success of Samsung’s low to mid-end Galaxy J smartphone family, especially in budget-focused markets across Europe and Asia, has had a decisive contribution to the company’s swift rebound on the heels of an agonizing Note 7 double recall.

Granted, the profit margins of these affordable devices are likely far from hefty, but their solid demand helped stabilize Samsung’s hurting reputation and brand recognition. Obviously, it’s time for a new generation of unpretentious Galaxy phones now, with the J7 V, aka Perx, to be followed soon by a J3 (2017) and J5 (2017).

The former, carrying model numbers SM-J330 and SM-J330F, has paid not one, but two trusted benchmarking databases pre-release testing visits over the past few days, revealing almost everything under its hood. 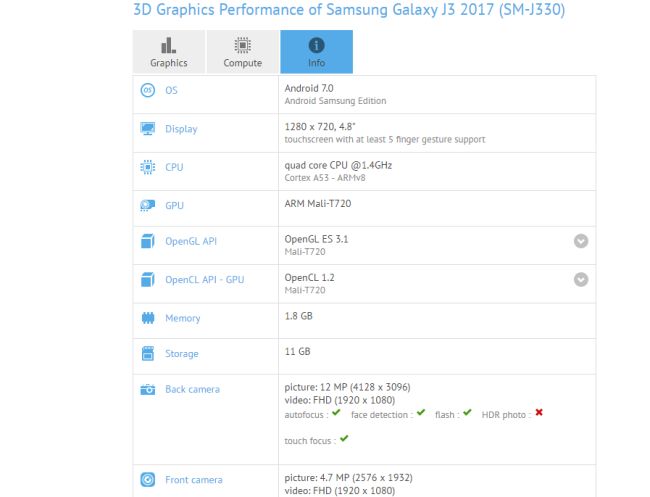 As you’d expect, the Samsung Galaxy J3 (2017) upgrades its predecessor’s processor to a respectable 14nm-based quad-core Exynos 7570, paired with a decent 2GB RAM, up from 1.5 last year. The cameras are themselves substantially enhanced, to 12 (13?) and 5 megapixel counts, and of course, Android 7.0 Lollipop runs the software show.

Bizarrely enough, the HD screen of this year’s J3 is a little smaller than before, at 4.8 inches, with a pretty standard 16GB internal storage space also in tow.

What’s even weirder is we expect the Galaxy J5 (2017) to sport a 4.8-inch 720p display as well, alongside a superior Exynos 7870 SoC, 12MP rear and 12MP front camera. Recently leaked as a seemingly all-metal affair, this SM-J530 (F) mid-ranger is now seen scoring FCC’s certification for a commercial launch in the near future.

The camera quality for video calls has been improved as well.

Have you ever dreamed of having full desktop computing power in a device that fits in your pocket and also still makes phone calls? The Cosmo Communicator running KDE Plasma Debian Linux might be it.
YouTube 1.8M
Facebook 570K
Twitter 197K
Instagram 133K
RSS