The Samsung Galaxy Camera isn’t a smartphone – but that didn’t stop us from using it as our daily driver for a weekend. Watch our video to see how this experiment went.
Published 02 January 2013, 20:16 EST

We’ve taken you on a software tour and we’ve shown you how it stacks up against the Galaxy S III – so the next logical step was to use the Samsung Galaxy Camera as our primary device for a weekend. Right?

We know what you’re thinking, and the answer is no: this wasn’t just a stunt. We really wanted to find out if the Galaxy Camera, which runs the full version of Android Jelly Bean on hardware sporting a cellular radio, could substitute as a daily device for a tiny niche of users: shutterbugs who don’t make a lot of phone calls, but do communicate in other ways, like via social media, IM, and SMS. It’s similar to the question that came up when tablets first became popular: could I carry this instead of a phone, or in addition to something simple like a dumbphone? Is that possible? Is it workable?

To find out, watch our video below, then check out our detailed impressions in text form below.

To get this out of the way: you can’t use the Galaxy Camera as a “phone” in the traditional sense, because there’s no earpiece and the mic isn’t in the right place. Furthermore, the Jelly Bean build that ships with the camera doesn’t include a dialer app.

However, you can use the speakerphone to make and take calls, and Skype works just fine in that regard, with and without video. Video calling mode uses the primary shooter, as there’s no front-facing camera, but the mic picks up audio just fine. We had no trouble carrying a conversations via Skype.

Though the camera has an MDN (phone number) assigned to it for network management purposes, it’s not possible to make calls or send texts to the device in the customary manner. Once again, though: third-party apps like Google Voice work just fine for this purpose, and Samsung also bundles its ChatON app for messaging. If you don’t dig either of those options, that’s fine: since this is an Android device, you can download almost any messaging solution you like. In our testing, Facebook Messenger and Google Talk performed very well during our time with the Camera, as did the stock Twitter app. 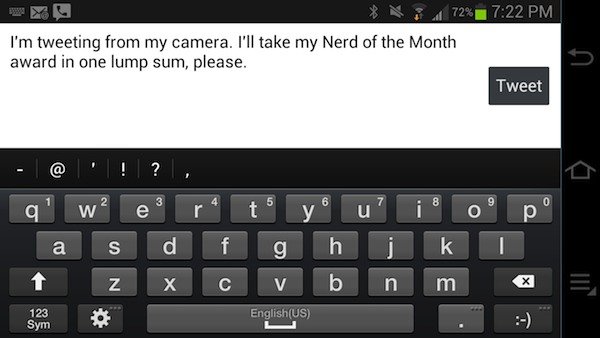 That’s a recurring theme with the Galaxy Camera: if it doesn’t come with the functionality you need out of the box, most of the time you can download it from the Play Store. I was able to get my homescreens lined up in my preferred order with HD widgets and folders containing third-party apps, including transit titles, games, calendars, and even Spotify – it was a strange, but fun experience to blast my favorite tunes from my camera.

This being the AT&T variant of the device, there’s no LTE onboard; I was confined to HSPA, but data speeds and reception were quite good. And of course, shots taken with the camera’s 16MP sensor outclassed what’s possible with most smartphone shooters. Having the option to upload directly to Facebook, Twitter, and Instagram without bothering finding a WiFi hotspot was nice – nothing new for smartphones, but a convenient novelty on a dedicated “camera.”

As you might expect, that added functionality comes with some compromises when you start stretching the device beyond its designed usage. This being a “camera,” it’s big and bulky compared to most smartphones. This is not a terribly pocketable device. As we mentioned in the SGS3 comparison, while portrait use is possible, it’s not preferable because of the awkward way it sits in the hand.

We were disappointed by the size of the battery included in the Galaxy Camera – only 1650mAh, and that limitation was apparent throughout our testing. We’re not sure why Samsung decided on such a small power pack on such a beefy device; it’s possible the optics take up more room internally than we realize. Whatever the reason, it was easy to go from a full-charge to a depleted cell in just over a half-day with heavy usage. Once again, that’s usage as a smartphone substitute, not as a camera, so it was heavier than average, but it was still quite disappointing for such a big and heavy device to die so quickly. 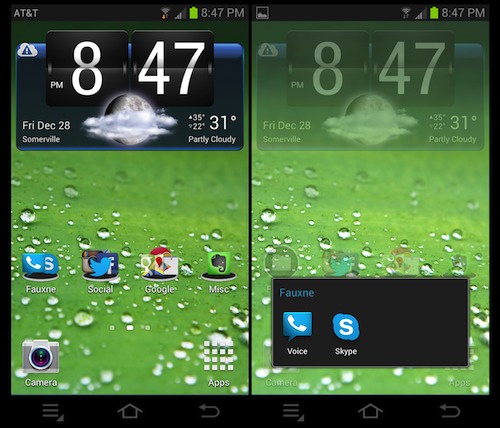 Samsung’s taken some steps to squeeze as much endurance as possible from the camera, and that’s resulted in some odd behavior. The device goes into a kind of deep-standby at times that prevents it from receiving timely notifications. Almost all of our email, text, and Google Talk alerts were delayed significantly during our time with the unit in standby, which tells us that Samsung has likely tweaked the unit’s polling settings when the screen is off.

That might also have originated from some aggressive energy-saving features we discovered late in our review period. Samsung offers customizable power-saving settings on the Galaxy Camera, similar to those on its other Android devices, to make the most out of the battery. When these features are enabled -as they were for the duration of our test period- they can limit maximum CPU cycles. This results in systemwide lag, lag that concerned us during our testing until we realized Power Save was switched on.

Taking the Galaxy Camera around town as a smartphone replacement resulted in a weekend that was, as you might expect, full of compromise. While its performance suffers as a result of using it “in a manner not intended,” it actually shines more often than we expected. That’s because it packs the full suite of enhancements that any high-end Android device offers in 2013, something not many purpose-built cameras can claim.

At $499.99, though, with the lowest useful AT&T data plan starting at $30 per month, this is no impulse purchase or trivial investment. While we like it a lot, and it could provide some savings if paired with a very bare-bones dumbphone, it doesn’t deliver a truly useful smartphone-replacement experience. Since it’s called the Galaxy Camera, we’re not really surprised by that. What does surprise us is how close it actually gets to smartphone-replacement territory. If you’re one of those shutterbug adventurers who’d still like to give it a go, more power to you — but we’d recommend you wait for the next generation of Galaxy Camera – hopefully one that packs slimmer hardware and a beefier battery.

One thing’s for sure, though: the line between smartphones, tablets, and other niche “mobile devices” continues to blur, and the Galaxy Camera, as a concept, is one of the most significant disruptors to grace the landscape in some time. If this device packed a slimmer build and proper smartphone hardware, we’d have the first real contender for a Nokia 808 PureView competitor — maybe that’s something we’ll see in the “Galaxy Camera II.” For now, though, we’ll take the GC-100 for what it is: a bold experiment, and a camera (not a smartphone) that gets more right than it probably should.