Samsung Galaxy C10 Plus launch might still happen, with 6GB RAM and Snapdragon 660

The SM-C9150 model number attached to a fresh AnTuTu listing could designate an upcoming Samsung Galaxy C10 Plus that we all assumed was canceled.
Published 07 February 2018, 09:24 EST

Galaxy C-series handsets never became a global mainstream thing, although a new C10 was strongly rumored last summer to start, or rather join, another mobile industry trend. In the meantime, the Note 8 actually had the honor of being Samsung’s first commercial device with dual cameras, while the Galaxy C10 vanished into thin air.

But a mysterious phone carrying model number SM-C9150 has recently paid AnTuTu a preliminary performance-measuring visit, and the benchmarking authority itself suggests this could be proof a Galaxy C10 Plus is still in the pipeline. 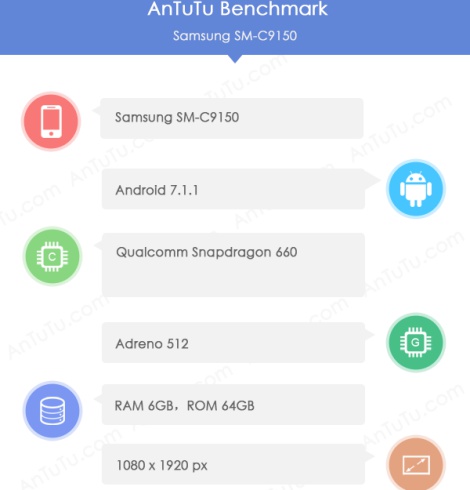 Both a “regular” C10 and C10 Plus might be right around the corner, with this latter version listed as offering 6GB RAM, 64GB internal storage space and Snapdragon 660 processing power.

That’s not too shabby for a product unlikely to enter flagship pricing territory, but what’s up with the Android 7.1.1 Nougat software and outdated 1920 x 1080 screen resolution yielding a conventional (read boring) 16:9 aspect ratio?

We could definitely chalk up the archaic OS version to this being an early prototype not yet updated to Oreo, but after the A8 (2018) and A8+ (2018), it really doesn’t make a lot of sense for Samsung to release an upper mid-ranger with a 16:9 display.

On today’s Pocketnow Daily, we talk about the possible launch of a new iPad Pro, Apple’s future mixed reality headset, and more.