Samsung has decided to take a major leap in its second convertible Windows tablet by moving to an ARM-based processor and an always-on LTE modem.
Published 18 October 2018, 11:00 EDT

Hot on the heels of adding cellular radios to its first serious Chromebook, Samsung has just announced its newest tablet PC convertible, the Galaxy Book 2.  The predecessor to this was the original Galaxy Book released all the way back in May of last year — you can see our review on that one here.

First of all, it’s got a Snapdragon 850 chipset instead of the Intel Core processors, making this an Always Connected PC in Qualcomm’s words. The new processor should give it much better battery life (up to 20 hours) as well as fully-integrated, always-on LTE connectivity.

Of course, with the change from x86 to ARM, Windows 10 has been made to conform to the lighter architecture. We’ve covered some of these before. What happens with your x86 programs is that they run inside a subsystem that makes the software think it’s running on an x86 processor. The performance gap was demonstrated to be fairly large with the Snapdragon 835 PCs, but we’ll have to test out this new-gen chipset to see if it persists. If you use mostly ARM-optimized (Universal Windows Platform) apps, then you’re going to be better off. 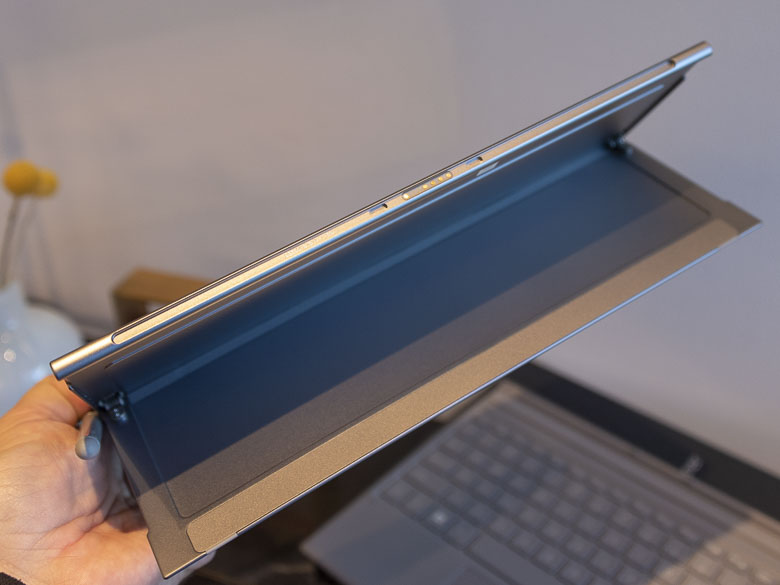 Another big change is how the keyboard attaches to the tablet. The Samsung Galaxy Book 2 is much more like a Surface Pro — it’s got a fold-out kickstand integrated into the back of the tablet, with a series of pins on the bottom edge along with magnetic connectors. 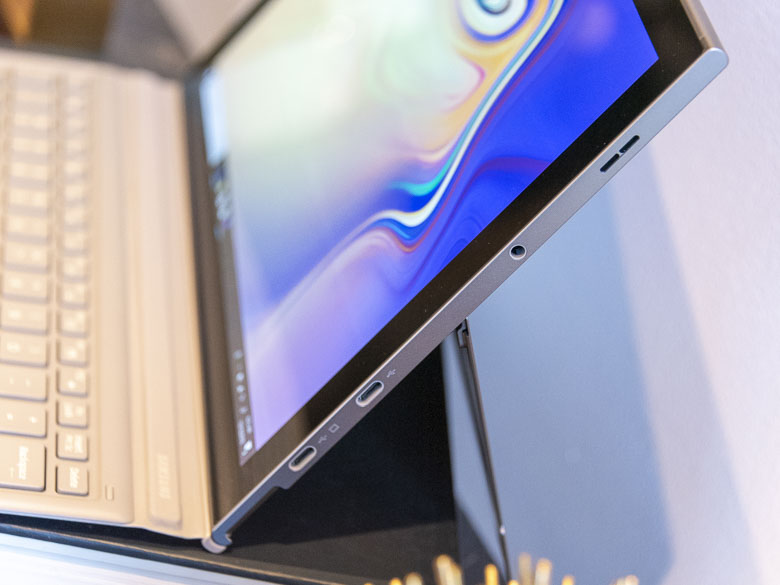 In terms of ports, we’ve got two USB-C ports on the right side along with a 3.5mm headset jack. You can also see a couple of speaker ports here. 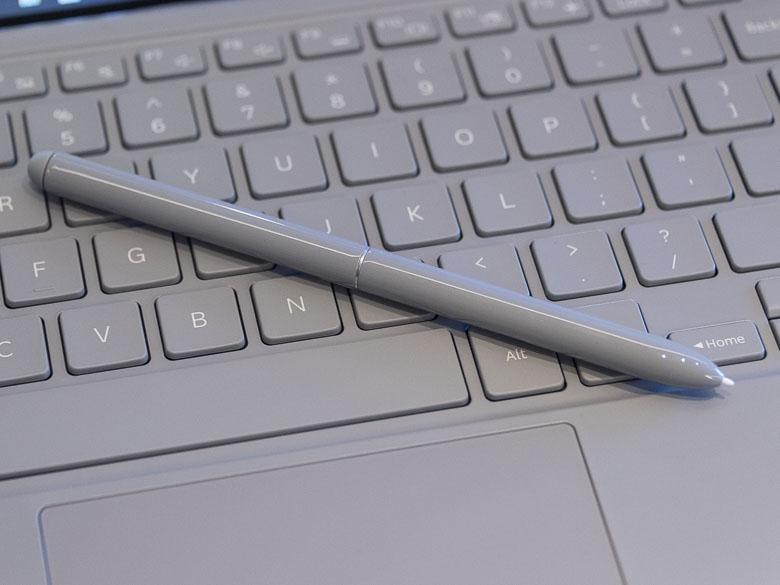 The new S Pen is much bigger than the one that was included with the original Galaxy Book. It’s very light and comfortable to hold. It now has an eraser on the opposite end, something that was sorely needed for creators. The barrel button still only brings up the Samsung S Pen app or Windows 10 Ink Workspace when pressed — you can choose in the settings — but luckily, you can now customize an app shortcut for holding the button while tapping the stylus to the screen. By default, that action generates a right click.

The included keyboard is very similar to the keyboard on the Samsung Galaxy Book. It’s a soft, smooth rubber feel, though the back now has nice texturing. 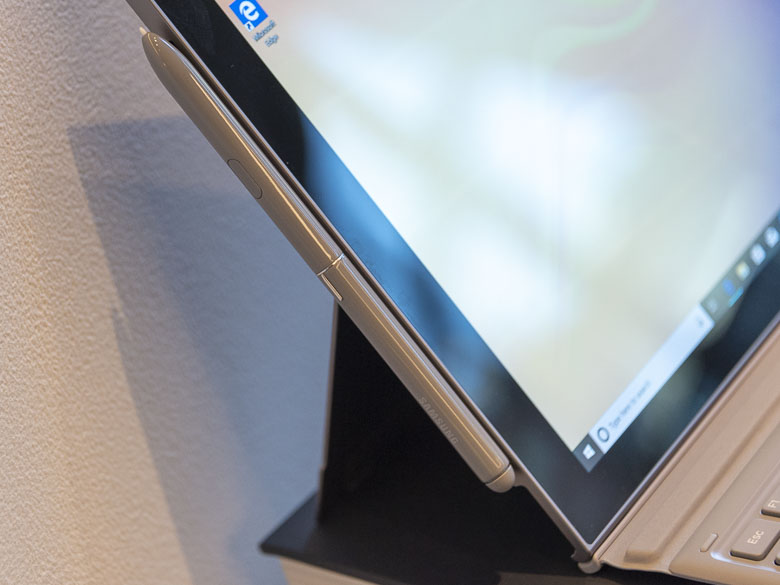 There’s no more adhesive pen holster on the keyboard either. The S Pen can magnetically attach to the left edge of the tablet. It’s not a particularly strong attachment though, due to the pen’s cylindrical shape. You might want to keep the pen somewhere else. 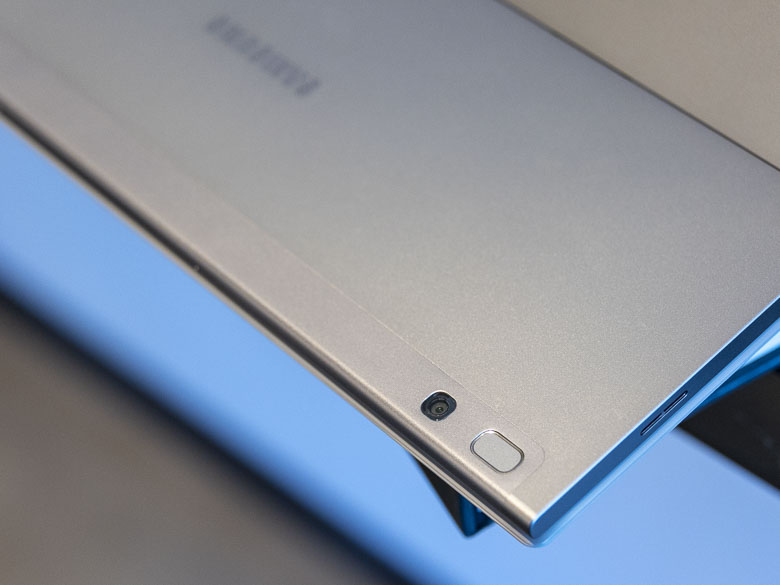 The rear camera has been moved from stage center to the left corner now and it joins a fingerprint scanner here, reminding us of the good times we had with the Galaxy Note 8’s rear-side setup. However, we might give this design a pass as rear cameras on tablets and laptops aren’t used as often as they are on phones. The fingerprint scanner does not double as a power button. 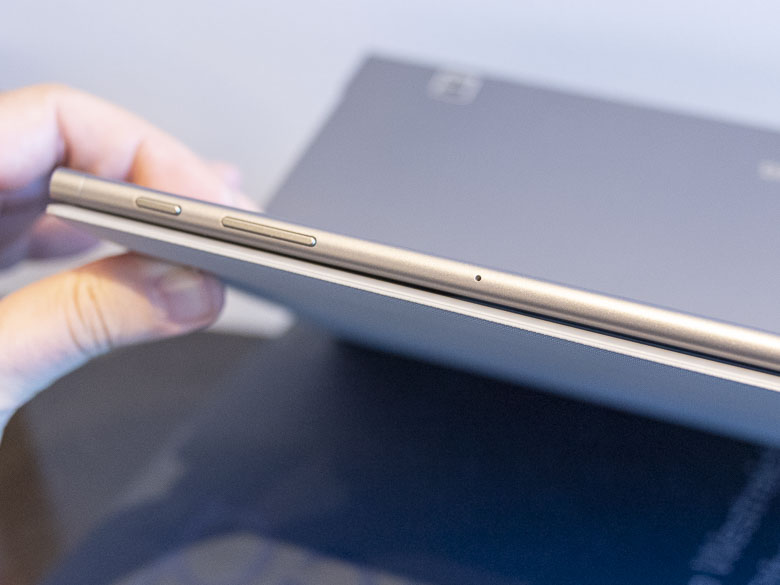 The power button and volume toggle switches are still on the top left edge of the tablet. 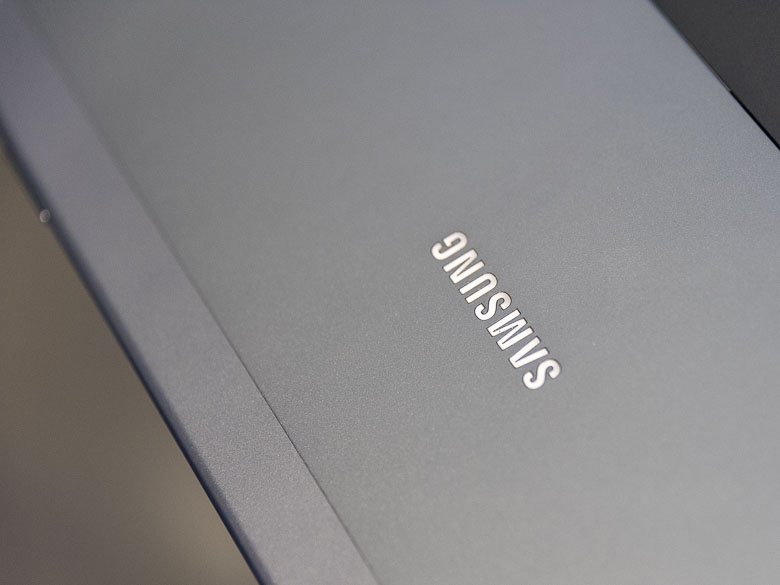 Of course, we need some nice shiny Samsung branding on the back. 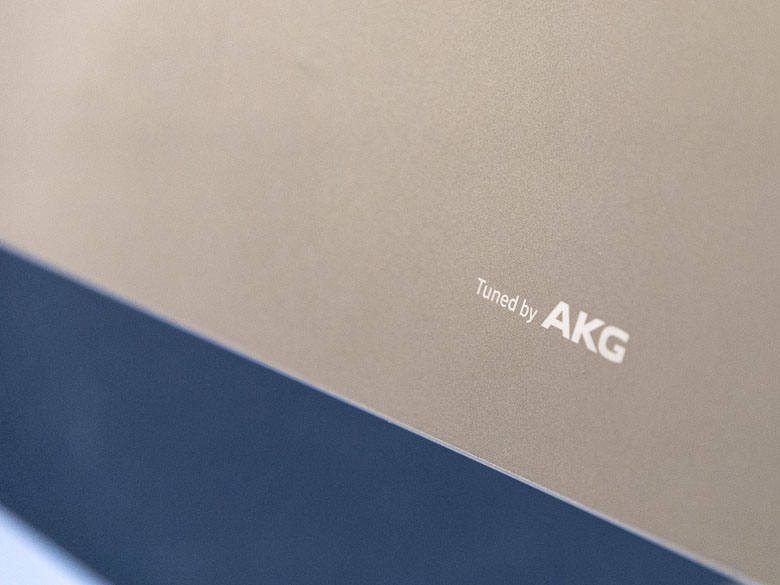 Another new thing is the improved stereo speakers that were “tuned by AKG”.  We know this because there’s this logo on the kickstand.

The Samsung Galaxy Book 2 will be available online with AT&T, Microsoft and Samsung for $999.99 — keyboard and stylus included — starting November 2. AT&T, Sprint and Verizon will stock the tablet in stores later next month.

Get amazing deals on some of the latest Microsoft Surface products at Amazon.com, where you will also find monitors and other devices on sale