After we reviewed the Samsung Galaxy Book 2, we’re taking another look at it, from a different perspective, by a different reviewer.
Published 06 February 2019, 07:00 EST

This is the Galaxy Book 2, far from an iteration to the Samsung’s predecessor, but instead the company’s first attempt at a new breed of Always Connected PCs. And by new, we don’t just mean the category of Snapdragon powered computers, but the fact that this one runs on a newer generation than the HP Envy X2 that we tested months ago.

Our own Adam Lein did our text review for this computer a few months ago, and given his artistic background, we highly recommend you give it a read. Fun fact, I’m Jaime Rivera, and I really wanted to give this particular computer a try. I do believe in an Always-Connected future, but my first experience wasn’t necessarily great. Let me begin this video by telling you what I like.

First off, if you’re looking for a good looking, good feeling Surface Pro alternative, this is it. Doesn’t matter where I go I get compliments over this gun metal aluminum finish that also feels expensive when you hold it. We have a hinge that works pretty much in any angle you want, and advantages like 2 USB C ports, and a headphone jack. It’s also got the advantage that you don’t need to pay extra for the detachable keyboard or the stylus like you do on the Surface.

This keyboard is backlit, with plenty of tactility on the keys, and I feel the plastic palm rest will age better than Alcantara, all while including a very cool stippled back that adds comfort when carrying the computer around.

The S Pen is just like the one we already love on the Galaxy Note. It doesn’t require battery power thanks to the Wacom digitizer on the display, and the tip feels like if you’re writing with a sharpie. I do find it the most convenient for using it to write notes, and Adam did praise it for artistic work. Added bonuses are that you can now use the other tip as an eraser, that the button can be used to mimic a double click on the screen, and that a single press will call on Air Gesture like on the Galaxy Note. 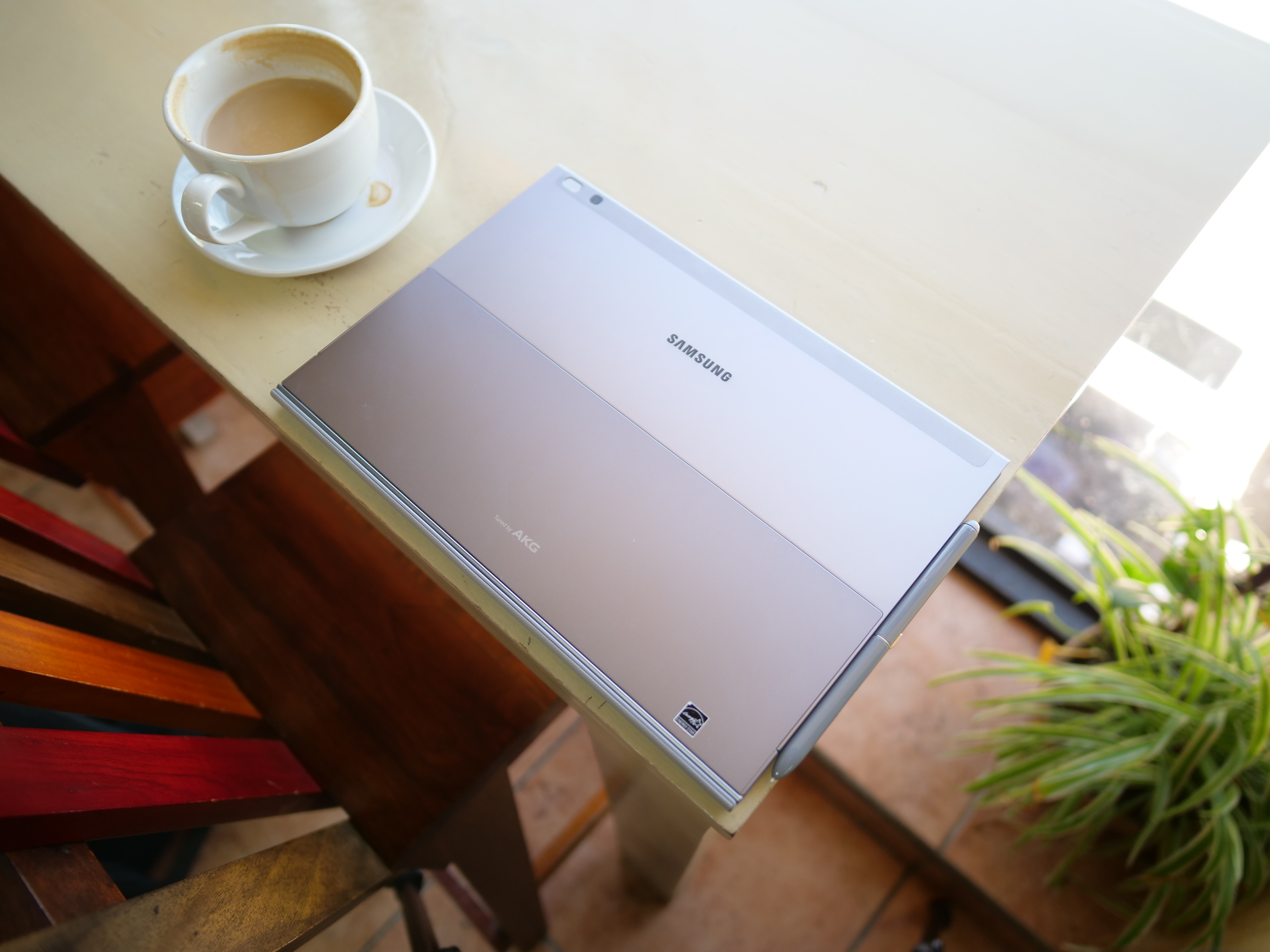 And let’s talk about that display. We have a 12-inch Super AMOLED panel at 2160 x 1440 resolution and I highly recommend you use in the new Windows dark mode. Colors are vibrant, and black just looks surreal. All tablets must have a great display, and this is one of my favorites hands-down.

Under the hood we have a new Qualcomm Snapdragon 850, hence the mention for a newer generation of the mobile processor made specifically for the Always Connected PC. We also have 4 gigs of RAM, 128 gigs of storage that’s expandable through microSD, a 47 watt hour battery, fast charging capabilities, and its biggest selling point – Always-On LTE connectivity with 20 hours of battery to spare, which is quite accurate, during my testing I really didn’t have to worry about charging this computer during my entire work day.

Windows 10 S comes out of the box, which I upgraded to Windows 10 Home. I rely heavily on Chrome and that requires an install from out of the Microsoft Store. As opposed to my experience with the previous generation chip, Windows on this computer feels great. The minor lag that I noticed interacting with it in the past is now gone. 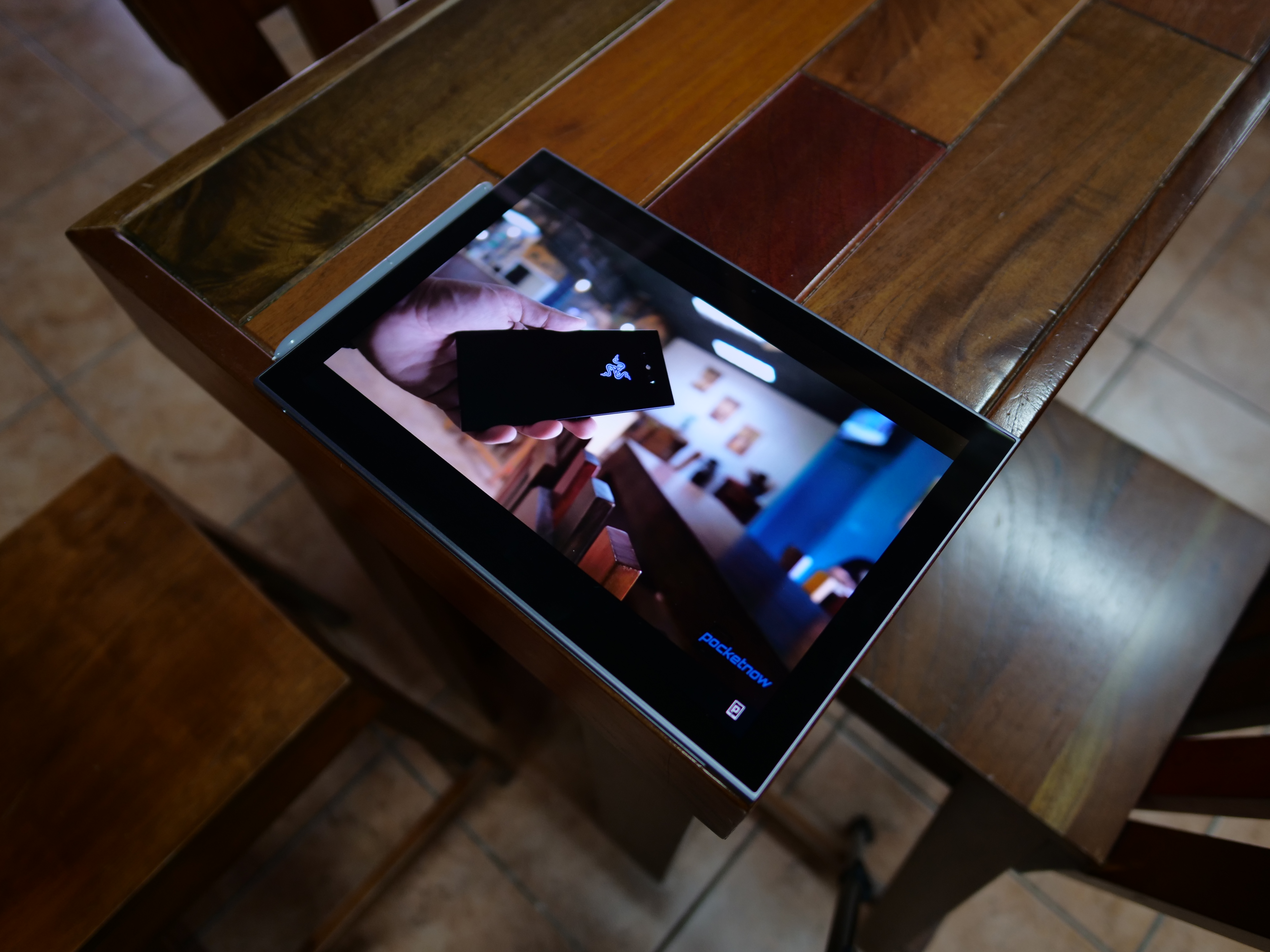 An added bonus is that Samsung is finally taking steps in giving Galaxy smartphone owners a reason to buy a Galaxy tablet or computer. Samsung Flow is bundled in the software and allows you to interact with notifications from your phone directly. It’s not a perfect service, definitely a step in the right direction.

But right about now it’s time to talk about the things where I’m mixed with this computer.

It begins with Microsoft’s recent approach to bloat and Windows. I think I uninstalled like 10 trashy games from the computer, and it’s just terrible that most are pinned to the start screen. 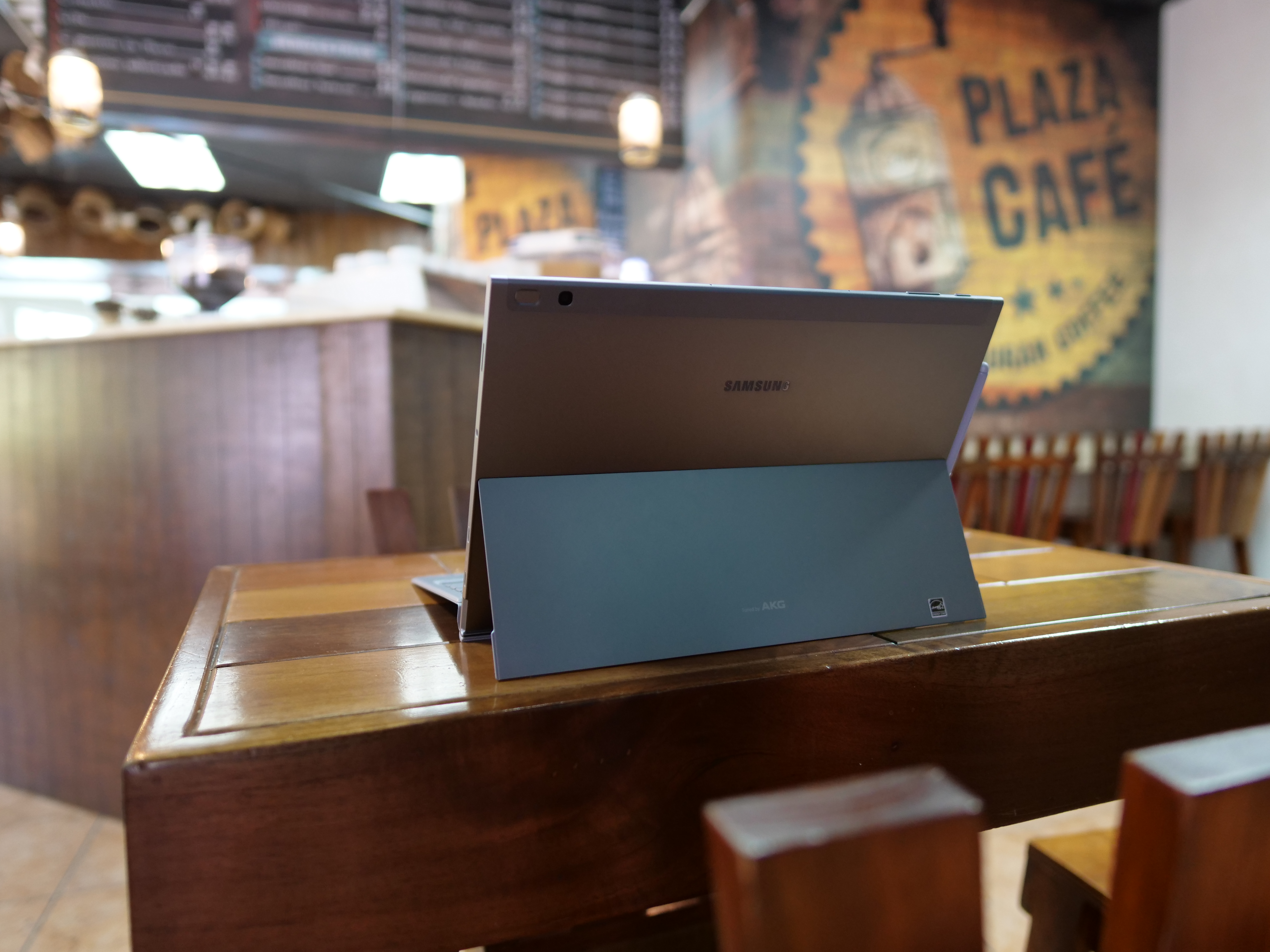 Second, well I didn’t mention content consumption when I talked about the screen because the speakers aren’t great. Samsung claims they’re tuned by AKG, and we do have dual-firing drivers here, but they lack depth, and are just average.

Third, I know for some of you the size of this tablet is fine, but even at nearly two pounds, this is not an easy product to hold and use as a tablet. And then there’s the problem that if you hold it with your right hand, you’ll cover the ambient light sensor and the screen will dim. It’s little things like this, plus the weight distribution that just makes it feel like if it wants to go back to its keyboard, and sadly this is the only size available for it.

And then there are the things I just don’t like.

To begin, since the S Pen is round and glossy, the magnets don’t do a good job at securing it to the tablet. I’ve dropped it way too many times, and it just makes you wonder why Samsung is able to fit it into a phone, and not the extra real-estate of this computer.

Second, the placement of the fingerprint scanner. Talk about playing a guessing game in trying to find it at the back of the tablet where it’s not at all visible. 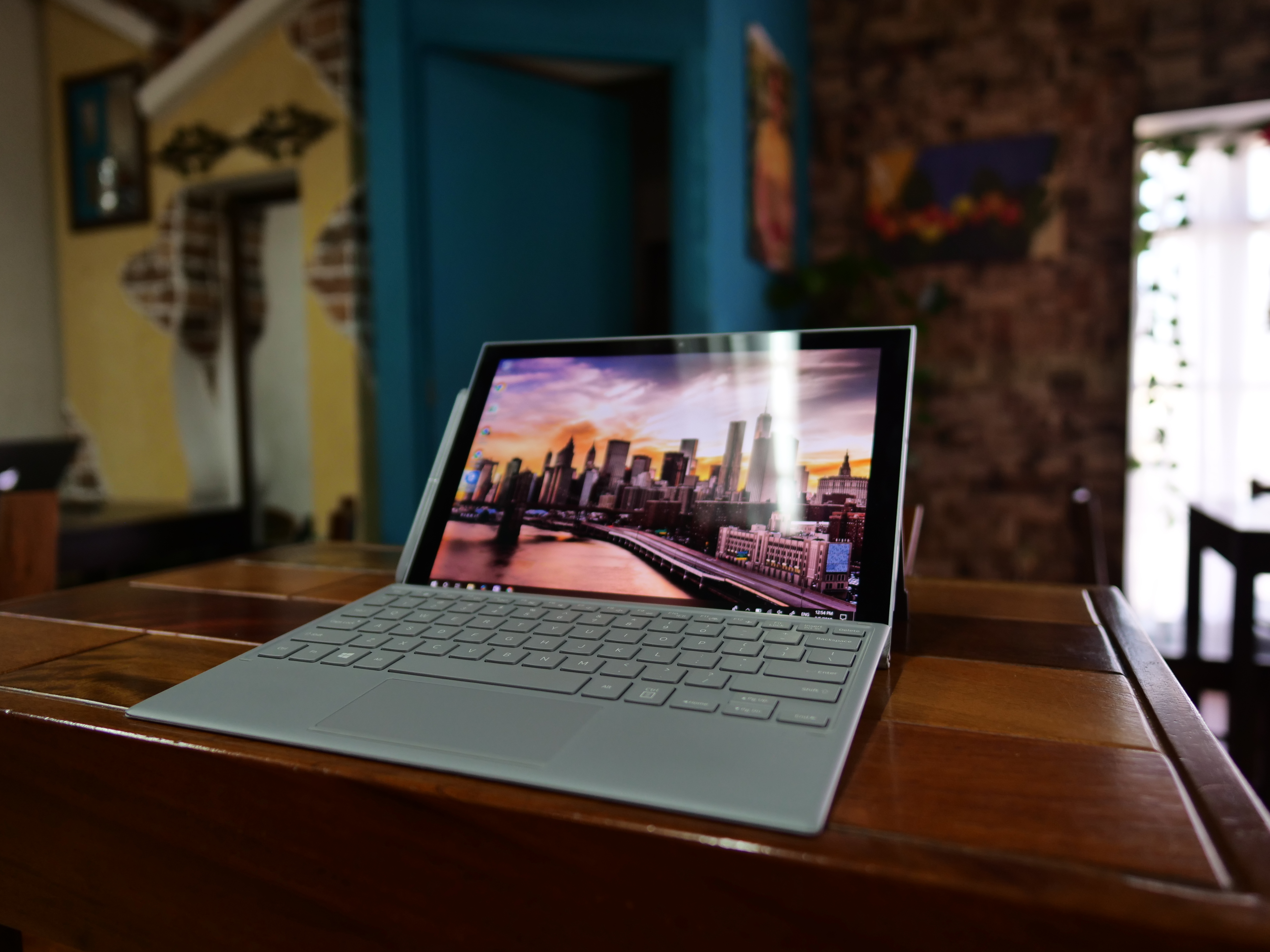 Third, call it nit picking, but at a time when some OEMS have completely done away with Function keys, having to press Function Lock even once to enable shortcuts like muting audio or boosting brightness on the screen.

And then last but not least, specs for its price. At $999 this is not a cheap tablet, and sure it can do things that an iPad can’t thanks to Windows, and yes, it includes the keyboard and stylus that in other devices bring the price up an extra $250. The problem is when only 4 Gigs of RAM are included, or 128GB of storage. Windows is RAM hungry, and it’s unfortunate that even Samsung Phones include more of it than this computer.

To conclude, even with its shortcomings, the Samsung Galaxy Book2 has more Pros than Cons in my opinion. What’s most important that you remember is that this computer is not for everyone. 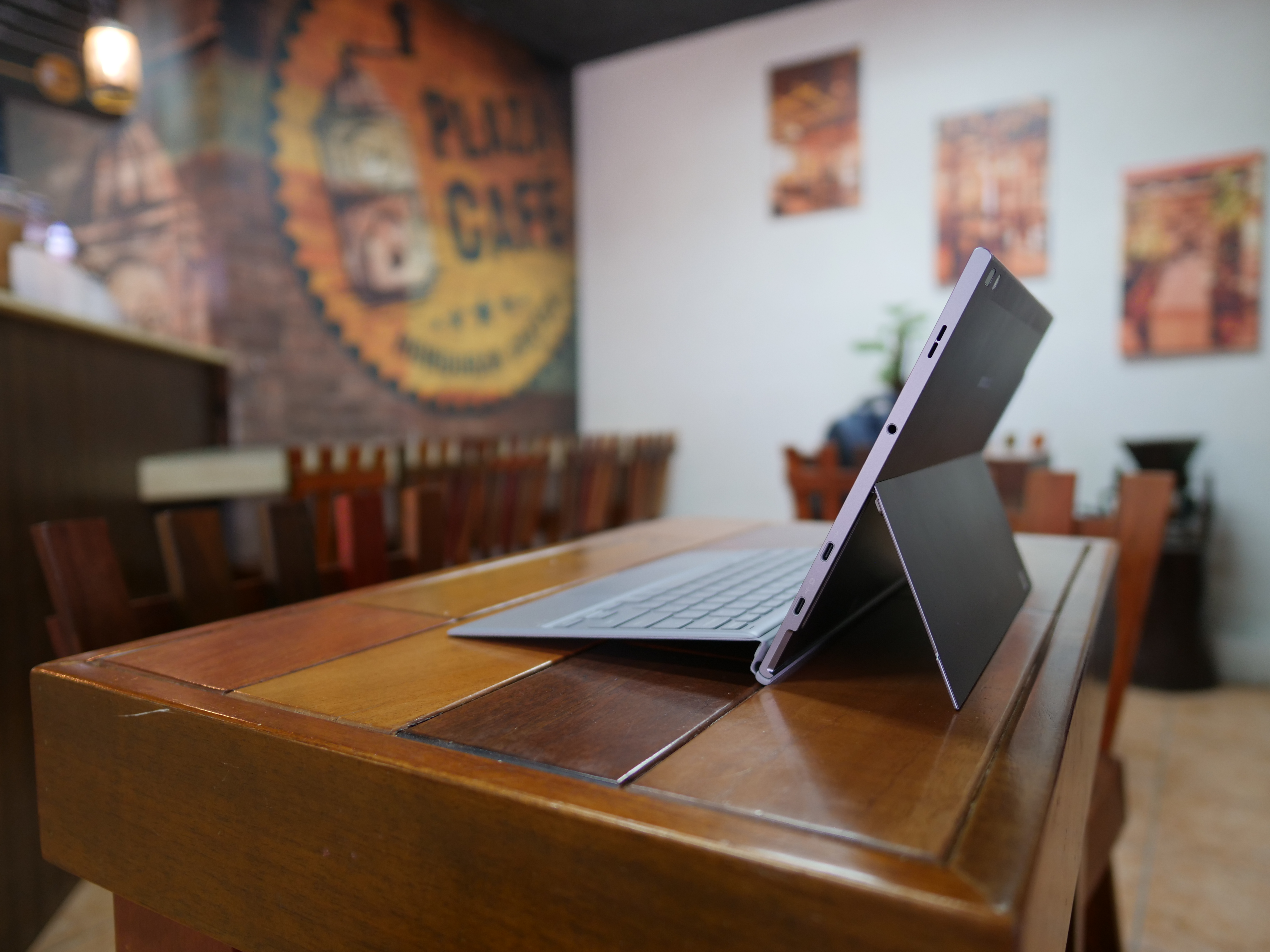 The main irony is that you’d think this is an artistic computer for Photoshop and other drawing tools. I mean hey, we have the form factor, and the S Pen powered by Wacom technology, right? Sadly that’s not the case. Read Adam’s review for more details on his experience as a designer and pro-photographer. There’s sadly not enough power for some of these tasks.

Nope, this computer is more for the road warrior, like me. People who need the power of Windows, matched with LTE connectivity, and battery performance that’ll provide peace of mind. I rely on tablets for highlighting my workflow, so for me this computer has been just fantastic.

If your usage is like mine, then I do highly recommend this computer. If your use is more like Adam’s, I think a Microsoft Surface Pro will be a better choice for a minor bump in price.

We are getting tons of Apple deals over at Amazon.com, where we find the latest Mac mini, the AirPods Pro and more devices on sale