Can’t you feel that holiday cheer, Samsung? The Ga-la-la-la-laaa-la-la-laxy A9 is back on the eggnog overflow and we have more details as to what it tows. And there’s also a little quirk that made us shift in our seats just a little bit. See if you can spot it and guess what we think it means while we go through the laundry list. 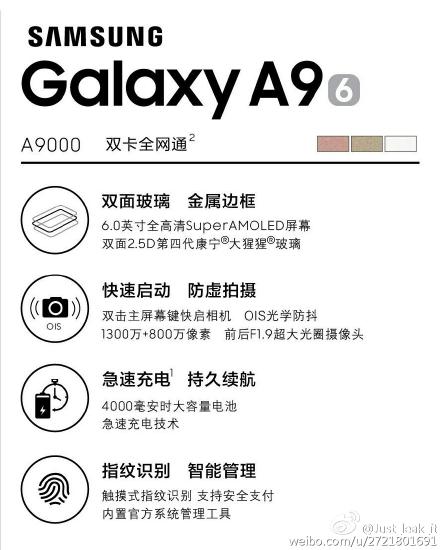 The new leak from Weibo seems to be a showroom specifications card meant for Samsung plots in retail stores or carriers. This one’s for the dual-SIM version that can apparently come in salmon, champagne or white colors.

The 2.5D glass (as we learned about in a previous leak) is made from two whole panes of Gorilla Glass 4 which cover a six-inch full HD Super AMOLED display.

An optically stabilized 13-megapixel rear camera and the 8-megapixel selfie shooter both come with f/1.9 apertures for some major light absorption. We know that the 4,000mAh battery comes with some form of quick charging (likely Qualcomm’s Quick Charge 2.0 standard). And as we and the industry have anticipated, a fingerprint sensor has made it onto a mid-range device.

The leaker also retreads the horsepower specs we encountered last go around: a Snapdragon 620 with 3GB of RAM and 32GB of storage. Dimensions were also given as 161.7 x 80.86 x 7.29mm.

This time, though, there’s word of room for microSD expansion. No, it’s not surprising — we wouldn’t put it past Samsung to continue adding the feature onto its mid-range devices which include the Galaxy A8 of July. We can’t help but look, though, at the company’s 2015 flagships and do a little comparing and contrasting. 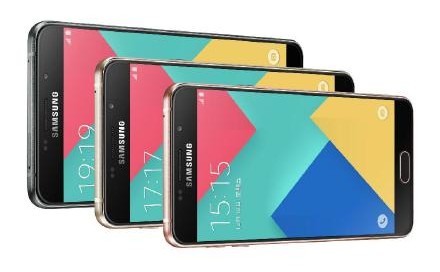 The leak also includes a render showing off the A9 as well as what look to be the new A7 and A5 devices planned for the lineup. Those time call-outs sure do help.

But the puzzle sets in when you note the icon-ified “6” immediately following the title header of the Galaxy A9 spec card, which we presume to denote the screen size. Does that mean we’ll be getting all of these capable specs in a smaller form factor, unlike those junior devices? That isn’t clear.

Furthermore, while Samsung Pay capability is established with just a fingerprint scanner, we aren’t sure if the phone will get the Magnetic Secure Transmission coils, too.

No real echoes on pricing, either — though the leaker replied to a comment on that topic saying that ¥3,500 ($541 as of this post) is a bit too stiff for the device. And when you get within $150 or so of the price that last year’s S-model launched at, we think that’s going to be a non-starter. But we’re not Samsung.

All in all, we have an interesting and very short-term Samsung tide-over until what looks to be a February launch of the Galaxy S7.

Thanks for the tip, James L.!

The phone will be launched tomorrow.