The ultimate selfie powerhouse? Samsung appears to be cooking up a “mid-range” Galaxy A7 (2017) phone with 16MP rear and front cameras.

It’s not the size number of megapixels, it’s how you use them. That might be a tried and true saying (just think of the stellar single 12MP cam on the back of both the Galaxy Note 7 and S7), but it obviously doesn’t hurt to beef up the megapixel count where possible.

Enter the mid-range (yeah, right) Samsung Galaxy A7 2017, which technically eclipses the company’s recent flagships in terms of the main and secondary snapper. What “secondary” snapper? Well, this upcoming 5.5-incher appears to fit the same exact droolworthy 16MP photography virtuoso on both its rear and face, prospectively producing some of the world’s sharpest selfies.

The only other semi-mainstream phone we can think of that sports a 16-megapixel front camera is the OPPO F1s, which is not very easy to procure stateside, hauling an oddly inferior 13MP rear-facing shooter anyway. 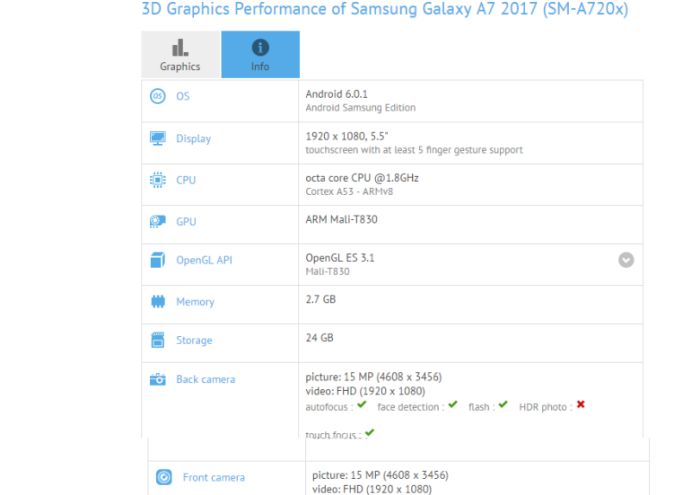 And the Galaxy A7 (2017), expected out this year by the way, isn’t all about snapshots and self-portraits either, also featuring other above-average specs (to say the least), including Full HD screen resolution, an octa-core 1.8GHz CPU paired with an ARM Mali-T830 GPU (Exynos 7870 SoC?), 3GB RAM, 32GB internal storage, and Android 6.0.1 “Samsung Edition.” If pre-release benchmarking data is to be trusted.