Capable of turning your Galaxy phone into a touchpad while also using it to power a PC-like experience, the Samsung DeX Pad is obviously launching alongside the S9 soon.

Evan Blass is obviously not one to play his cards close to his chest in anticipation of a glamorous smartphone announcement, but he also doesn’t typically like to lay all his cards on the table three weeks early.

Of course, after revealing a number of key Galaxy S9 and S9+ features way back in November, confirming essentially everything more recently, including the two phones’ commercial release schedule, and then rendering them in the snazziest available paint jobs, we were seriously wondering what the (in-) famous leaker had left up his sleeve.

Enter a pair of high-quality promotional images of that new DeX Pad. In case you’ve forgotten, Blass makes sure to remind us all he was the first to report on a “backward-compatible DeX docking station that situates the phones flat and utilizes the screens as either a touchpad or a virtual keyboard.” 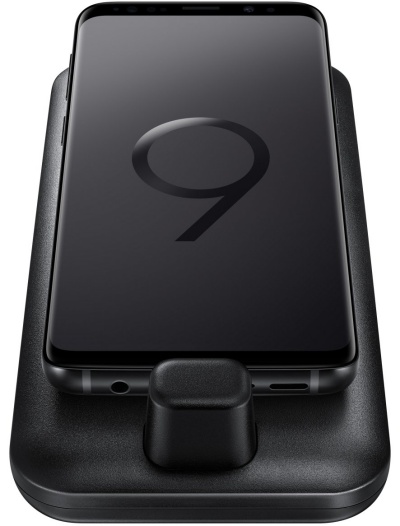 This “so-called” DeX Pad is not pretty, but its purpose is not to turn heads with a sleek design. The goal is simply to take last year’s DeX Station to the next level in terms of productivity and versatility.

Nowhere near as ambitious a concept as Razer’s Project Linda, Samsung’s DeX ecosystem arguably brings us one step closer to the dream of a mobile device seamlessly able to transform into a full-fledged PC.

The need for either an external mouse or keyboard is eliminated with the DeX Pad, which oddly seems to ditch its predecessor’s Ethernet port while retaining two USB-A connectors (in addition to USB-C for power and smartphone plugging). Oh, and in case you ever doubted it, the existence of a traditional headphone jack on the Galaxy S9 is also confirmed today. Sweet!

It seems that we could finally get Google apps back in Huawei and Honor smartphones, but they would arrive directly in the AppGallery