Samsung has officially sent out a newsletter confirming the delay of the Galaxy Fold release. A new date will be announced in the coming weeks.
Published 23 April 2019, 02:00 EDT

News broke yesterday that Samsung is delaying the Chinese Galaxy Fold launch, followed shortly by similar chatter regarding other regions, like Spain. While it was unofficial, the rumored reasons were mentioning the recent incidents with some devices breaking after merely just days of use. Now Samsung has officially confirmed that it is delaying the Galaxy Fold release, and will announce the new date in the coming weeks.

The company didn’t mention a specific reason, but did, however, say in its newsletter that based on initial feedback, it plans to run further tests. Samsung also shared that the initial findings on broken Galaxy Fold phones indicate a possible impact on the top and bottom parts of the device, where the hinge is exposed. Samsung is planning to strengthen the protection of the display in order to avoid similar incidents in the future. Additionally, the Korean company plans on being more specific when it comes to care and handling of the Galaxy Fold. See the official statement below.

Additionally, Reuters also reports that Samsung is taking back all Galaxy Fold units that were distributed to reviewers, media, and influencers, “to investigate reports of broken screens”. “It’s disastrous that Samsung sent samples to reviewers without clear instructions on how to handle the device, and that the firm needs to fix screen flickering“, said analyst Kim Young-woo at SK Securities. 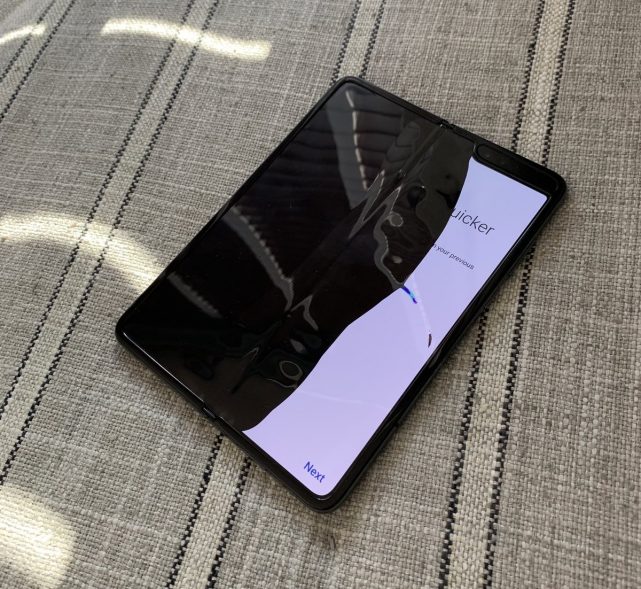 We recently unveiled a completely new mobile category: a smartphone using multiple new technologies and materials to create a display that is flexible enough to fold. We are encouraged by the excitement around the Galaxy Fold.

While many reviewers shared with us the vast potential they see, some also showed us how the device needs further improvements that could ensure the best possible user experience.

To fully evaluate this feedback and run further internal tests, we have decided to delay the release of the Galaxy Fold. We plan to announce the release date in the coming weeks.

Initial findings from the inspection of reported issues on the display showed that they could be associated with impact on the top and bottom exposed areas of the hinge. There was also an instance where substances found inside the device affected the display performance.

We will take measures to strengthen the display protection. We will also enhance the guidance on care and use of the display including the protective layer so that our customers get the most out of their Galaxy Fold.

We value the trust our customers place in us and they are always our top priority. Samsung is committed to working closely with customers and partners to move the industry forward. We want to thank them for their patience and understanding.

This won’t be the first time Xiaomi will be rebranding one of its Redmi phones as a Poco phone if this happens.

The Google Pixel 5a is said to come equipped with a 6.2-inch OLED display while rocking a build strikingly similar to the Pixel 4a 5G.
YouTube 1.8M
Facebook 570K
Twitter 197K
Instagram 133K
RSS