Apple May Have Taught Samsung How to Destroy Them

Apple’s strategy of dropping the price on older phones as low and mid tier devices might well be the model Samsung can use to drive the iPhone further down.

Year after year, rumors surface that this is the year Apple introduces the “Cheap iPhone” and year after year, Apple does. They introduce discounted pricing on last year’s iPhone. And they sell, and sell and sell.  Maybe not at the rate at which the new iPhones sell. But they sell because they’re still really good phones. Not the latest and greatest, not the sexiest, but they’re still very good.

This is the position at which Samsung finds themselves this Thursday. With the Galaxy IV set to be unveiled in just a hair over 36 hours, it is time for the GSIII to move on to the next phase of it’s life. But that next phase ain’t exactly being put out to pasture…

As our own Michael Fisher pointed out, the GSIII is still a really great phone. Its specifications are still very respectable in today’s market. Anyone could walk into a carrier and walk out with a GSIII feeling pretty good about themselves. And so, if the Android King plays its cards right, Apple has just taught Samsung a very important lesson. And since Samsung has taken so much from Apple, what’s one more thing right?

Samsung needs to make sure the GSIII is right there stand alongside its younger brother. They need to announce new pricing for the GSIII. While they’re at it, they should lower the price for the GSII, which is also a very solid phone offering. The GSIII and GSII will now become the “low-end” smartphones. They already have the name and the brand recognition that is so hard to gain. And they both have solid reputations as dependable workhorses. Sure, they won’t be as shiny as the GSIV, but that’s why they’ll cost less.

Offering a full line of phones from the GSIV down to the GSII, Samsung will now also be featuring the Galaxy brand across all price points – a very important distinction. Up until now, the Galaxy line has been relatively high-end. You either rolled with the big boys with the GSIII or you had a lower-market  phone. Now, Samsung can appeal to incomes of all levels utilizing the same brand and make it that much more a household name, similar to where “iPhone” finds itself in the mind share arena. Suddenly, you’re not just buying an Android phone, you’re buying a Galaxy.

Samsung has been climbing in smartphone market share due in large part to the Galaxy line. By continuing the run of Galaxy phones which have been working incredibly well thus far, Samsung will leveraging its past success and still beat Apple phone for phone (at least in the public’s eye). Samsung’s phones have been climbing the charts for a reason, after all. The Android app ecosystem is now closer than ever to matching the iOS App Store and when you add Samsung’s large, rich displays, solid hardware, and other innovations (tap to share, etc.) they’re now set to take an even bigger slice of the market share pie.

Now, if someone doesn’t necessarily want to drop a good chunk of change on a brand new device, they will still have options within the same, presumably coveted Galaxy line. 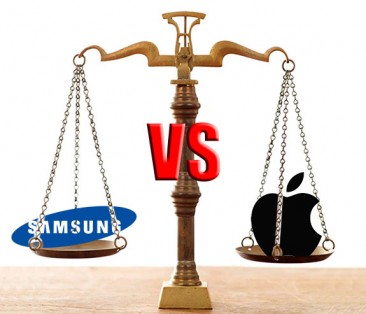 Apple has proven this strategy works. They’ve been doing it for years. What might happen if another player starts playing the same game with products that are already out-selling Apple’s line. Combine that with Apple’s stagnant state of affairs, that could spell trouble for our little fruit with the bite missing. Oh my. Did I just go there?

It’s no secret that Apple hasn’t exactly been blowing people away with their products for the last 2 years or so. The iPhone 4 was really the last time Apple really innovated anything. They changed the entire design, they had a major software update. It was a very exciting time to be buying an iPhone.

The iPhone 4S added Siri, and the iPhone 5 increased screen size to what the standard was a year before that. Instead, Apple has been more focused on software innovation – the aforementioned Siri, and Apple maps for example. Sadly, neither has really defined innovation. Apple’s numbers have plateaued, and that is a big reason.

Meanwhile, Samsung has been steadily rising, and not just in the ranks of Android manufacturers, but in world smartphone market share.  If Samsung steps on stage tomorrow and unveils a whale of a flagship device, they will continue their climb. But, if Samsung can take one last page from Apple’s book and not only blow us all away with a killer phone tomorrow but also offer their former-flagship-but-still-epic GSIII as their mid-tier-which-is-laughably-better-than-mid-tier option, they will be in position to really take the smartphone market by the throat and dominate.

Of course, all this speculation comes with the billboard-sized asterisk that they ACTUALLY introduce the GSIII as a lower end phone. It remains possible that they may do no such thing. We certainly haven’t heard any rumors to that effect. Even if they do follow the pricing strategy and reduce GSIII prices, if they do it quietly – as in no announcement at the event – then the GSIII stands to get lost behind its prettier new sibling. That won’t be a bad strategy mind you, but it won’t garner any media attention either. The best way for Samsung to fully capitalize on its event is to announce it all and grab that buzz while they have everyone’s attention.

Even the iconic iPhone should be waiting with bated breath and hoping that doesn’t happen.