A good dozen or so major Samsung products should be up for Android Marshmallow updates in the first two quarters of 2016, according to a fresh rumor.
Published 15 December 2015, 05:05 EST

Samsung’s first rumored Android 6.0 update roadmap hinted at three phases, but only tackled device names for two, and release timelines for one. A second chart expanded on the list, also switching a few due dates, while the latest schedule once again restricts the Marshmallow-ready phone and tablet roster, turning vaguer as far as deadlines are concerned.

The good news? There are apparently a bunch of Galaxy handhelds set to leave Lollipop behind between January and March 2016. The bad? The Note 5 is no longer slated to begin the M rollout in time for New Year’s Eve.

Oh, and in case you needed further confirmation, that local Note 4 soak test is unlikely to go global before Q1 as well. The Galaxy Note Edge, S6 Edge+, S6 Edge, S6, S5, and even S5 Neo should all receive sweet Marshmallows OTA next quarter too, at least if we’re to trust this unverified and unverifiable fresh scoop.

It’s worth pointing out the Galaxy S5 was previously scheduled for the all-important update in April, whereas the S5 Neo was ignored altogether by those other tipsters. Meanwhile, word around the street now is the Galaxy Alpha, Galaxy Tab S2 9.7 and 8.0, plus the Tab A will follow suit on the Android 6.0 Marshmallow bandwagon during the second quarter of 2016. 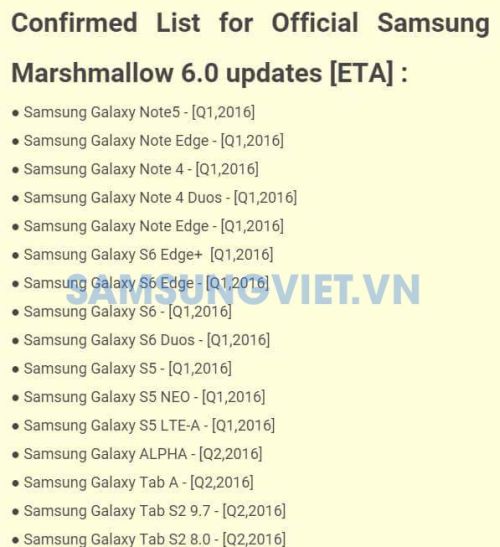 All five of these products (remember, there are two Tab A variants) were listed as “waiting approval” before, and intriguingly, three featured on the update guide’s inaugural wave, with the other two part of phase 3. We’re guessing everything’s still subject to change and major overlap, but the fact of the matter is Samsung’s working hard to please as many of its fans as quickly as possible.

Samsung is yet to announce the Exynos 880 SoC.