Samsung’s three rumored phases of Android Marshmallow updates are expanded, with tablets now included, but 6.0 ports for the Note 3 and S4 not approved.

First, there were eight. Then, over a dozen, split into two phases, with more to come in a third wave “after initial testing.” And now, all three phases of Samsung’s Android 6.0 “update guide” are detailed, with status tweaks, revised timelines, and even news of a few devices that will probably not support Marshmallow.

In a somewhat surprising twist, the equally fresh, equally great Galaxy Note 5 and S6 Edge+ are no longer slated to score the battery-enhancing and stability-improving set of software goodies at the same time. Instead, the Note 5 should jump on the Android M bandwagon next month, with the Galaxy S6 Edge+ following suit in January 2016, alongside the S6 and S6 Edge.

Despite their advanced age, the GNote 4 and Note Edge could also move to 6.0 very quickly, in February 2016, though actual Marshmallow testing isn’t underway yet, and therefore, a lot of things may still change. The same goes for the rest of the phase 1 gadgets, namely the GS5, Galaxy Alpha, Tab S2 9.7 and 8.0, of which only the S5 has an ETA attached – April 2016. 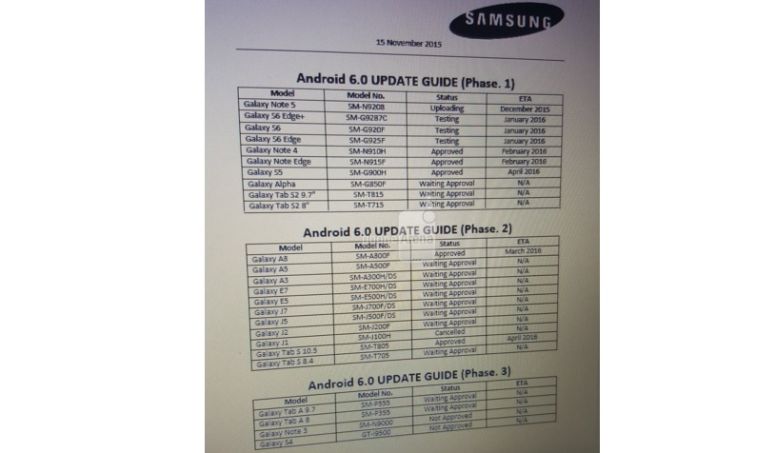 It’s certainly nice to see tablets added to the 6.0-ready list, including the first-gen Tab S duo in phase two, and lower-end Tab A 9.7 and 8.0 in phase three. But Android Marshmallow is merely approved for the Tab S 10.5, with the Galaxy A8 handheld oddly due to make the over-the-air leap as early as March, despite leading the so-called phase 2 pack.

The Galaxy A7 is bizarrely snubbed of the entire schedule, with the A5 and A3 “waiting approval”, just like the E7, E5, J7, J5, and J2. Finally, it seems Samsung may have tried to optimize the newest, smoothest version of Android for the entry-level Galaxy J1, as well as the ancient Note 3 and S4, but the former is listed as “cancelled”, and the other two as “not approved.” Bummer, yet there was no logical reason to expect a happier ending.