Whether Apple calls it “iPad (6th gen)” or labels it “iPad 9.7,” it’s still a new iPad and it’s meant to give students an edge up on all the other touchscreen-bearing and keyboard-toting slabs out there.

The company introduced the new iPad at Lane Technical High School in Chicago today. It has the same LCD display with the same QXGA resolution, the same 8-megapixel camera at back, the same 1.2-megapixel FaceTime camera up front, the same Touch ID funcitonality and about the same battery potential (32.4Wh) as last year’s iPad.

What’s actually new is the A10 Fusion chip on-board, first seen on the iPhone 7. The processor brings users into augmented reality revolution in education software. That’s not to say that the bottom-mounted stereo speakers will help create the most immersive experience, but there is a headphone jack to let students plug in. Apple says that the processing power in the A10 should also push 4K video editing into the mainstream. 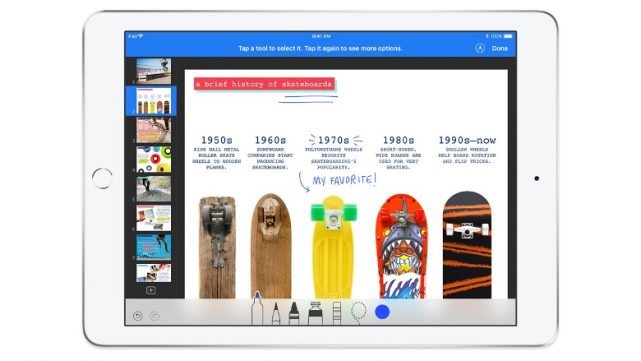 iOS 11 recently adopted a bevy of tablet-friendly features and, for the first time, has a first-party file manager, good for sorting out all the documents one would want to put into an iPad and edit. Users can split-screen different apps and move assets from one pane into the other for true drag-and-drop versatility.

But the company has made it clear that it’ll be the Apple Pencil, once only fit for iPad Pro models, getting the star treatment here on the affordable version. The Pages, Numbers, and Keynote apps — among others — have all been updated to accept Apple Pencil input for those who want less friction and more pinpoint precision.

The new iPad, much like the old iPad, comes in 32GB and 128GB memory options with silver, gray and gold finishes. And for as much as Apple is able to reduce internal costs, leading to this being called “our most affordable iPad,” the price grid remains the same from last year, too: the Wi-Fi-only models are $329 and $429 and the LTE-enabled variants come in at $459 and $559, respectively. Keep in mind that the Apple Pencil still costs $99.

Orders made today will be delivered at the earliest on April 2.

The new Facebook Live Audio Rooms feature was available only in select regions and only a select few groups and people, but that changes today.

You can save big bucks on some of the best smart speakers in the market, as the latest Amazon Echo and other devices are on sale