The Roland R-07 makes sure you never end up in a situation where you miss a spoken word or a tune, regardless of how serious you are about your audio.

Those who are even remotely connected to the audio industry need no introduction to Roland. For those who haven’t heard about the Japanese company, it manufactures, among other things, musical instruments, DJ gear, amplifiers, recording products, and much, much more. But you don’t have to be a professional musician or film-maker to take advantage of the Roland R-07 portable high resolution audio recorder, which is why we’re taking a closer look at it here on Pocketnow.

With a small footprint, weighing 150gr. and measuring 61 x 103 x 26mm, it is probably smaller than the smartphone you’re rocking. Roland designed the R-07 with portability in mind, without sacrificing on the features it delivers. Whether you’re a musician recording demos or memos on the go, an on-site reporter, a student, or attending a board meeting, you won’t have to worry about carrying sophisticated tech or compromise on quality. The Roland R-07 is as capable as it is small. 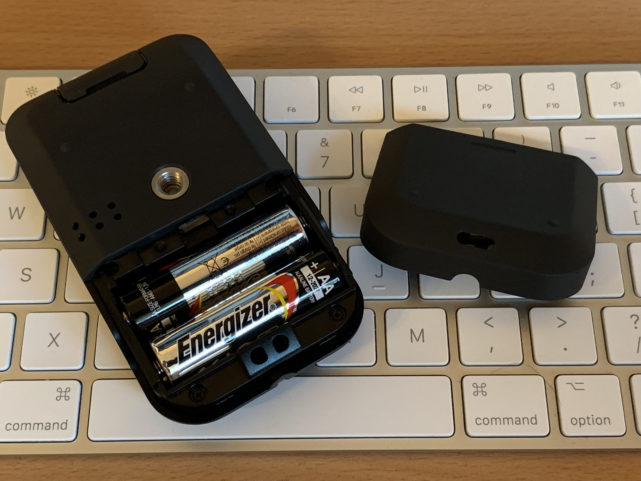 Powered by two AA batteries, it features a graphic LCD display, with 128 x 64 dots, that is also backlit. Audio is captured by a pair of two omni-directional microphones located on top of the device, and stored on microSD cards, the device being SDHC format compatible. The Roland R-07 doesn’t function without a microSD card inserted, but there is an 8GB card in the unit out of the box.

As far as signal processing is concerned, the AD/DA conversion (analogue-digital/digital-analogue) happens at 24 bits, 44.1/48/88.2/96kHz. 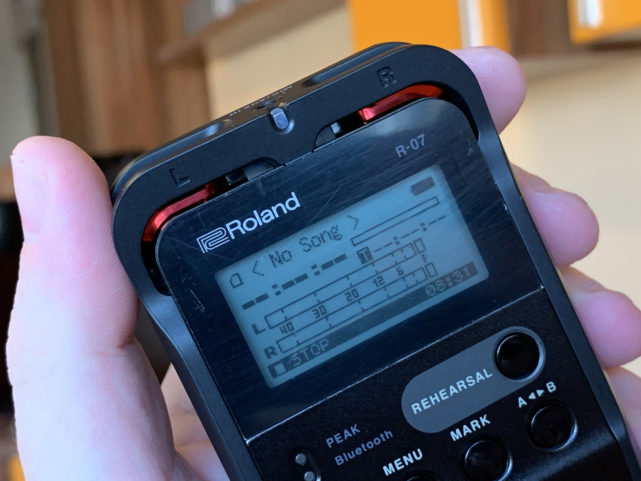 In addition to its own pair of microphones, the Roland R-07 can also record from an external source, using its 3.5mm MIC/AUX IN port. However, this will disable its own microphones, so using both audio sources is not possible, for obvious reasons.

You can play back the recordings either using the device’s built-in speakers, via headphones, or Bluetooth, with aptX support.

If you are serious about your audio and are reading this, other Roland R-07 features include reverb (four types) and change speed features, as well as a metronome and tuner built in. Frequency response is in the range of 20Hz – 40kHz (+/-3 dB). 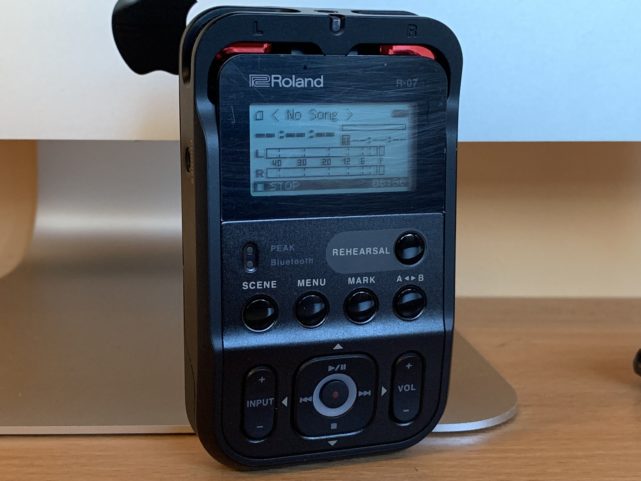 The Roland R-07 is accompanied by a pair of AA batteries inside the box, complete with documentation and a microSD card inserted into the device, so you’re ready to go. The manufacturer says two brand new alkaline AA batteries are good for 15 hours of continuous playback or recording, but the unit can also be powered via its USB port. 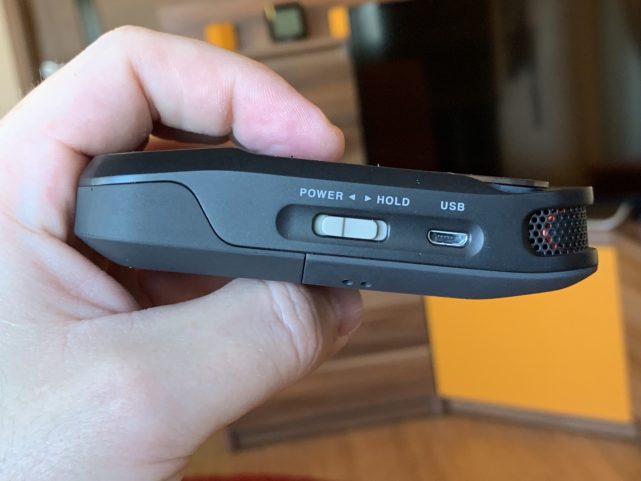 Depending on the recording format that you use, as well as the microSD card that’s inserted into the device, your mileage may vary. The image below should give you a rough idea on how long your recordings can be, depending on the aforementioned variables. 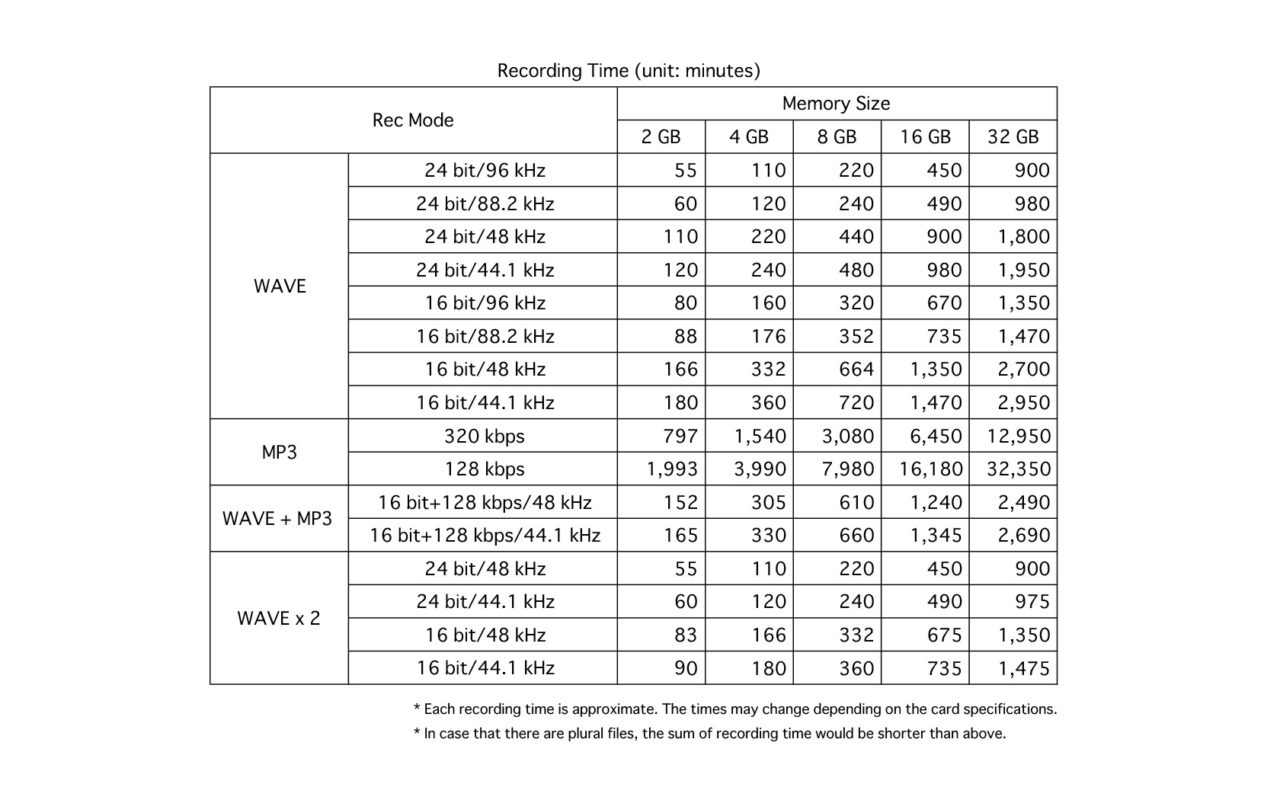 The interface is rather simple, and so is the device’s menu. Operating is easy and intuitive, and it is done by using the buttons that are all located under the display. These include the record button, the playback controls, volume, mic input gain, headphone output level, and the rehearsal, scene, menu, mark, and A-B buttons. 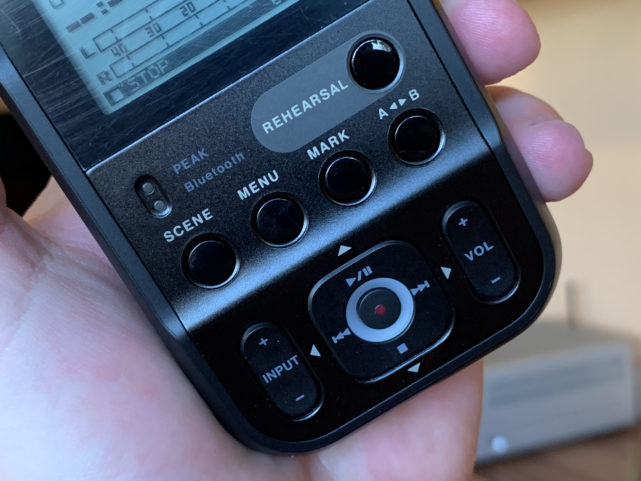 We’ve used the Roland R-07 over the course of several weeks, recording in various scenarios, from casual recordings to meetings, from voice-over tracks to interviews and podcast episodes. Being such a versatile gadget, it can easily adapt to any situation, and its small footprint is definitely at the top of the Pros list, and it does that without sacrificing on quality. 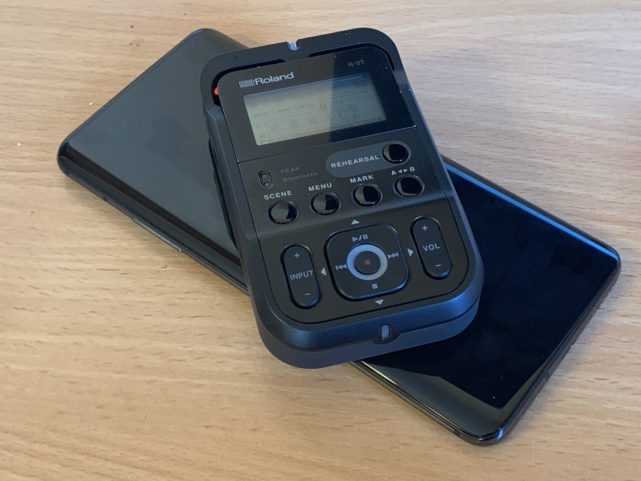 The Roland R-07 also has some neat on-device editing capabilities with marker-setting features, which easily allow you to cut, trim, reverb, etc., and, if you’re a musician, you’ll definitely take advantage of the built-in metronome, tuner, and playback-speed control.

Smartphones these days, especially higher-end models, feature multiple microphones for capturing rich audio. However, nothing compares to a dedicated high-res audio recorder, if you are serious about your recordings.

You can easily download your recordings from the device either via a microSD card reader, or by connecting the Roland R-07 to a computer using a USB cable. This is also how you’ll update your firmware, should there be a newer version available. In order to use a smartphone as a remote control for the R-07, you’ll need to download the Remote app (there’s also an Apple Watch app), and just enable Remote control from the device’s menu. It’s as simple as that. 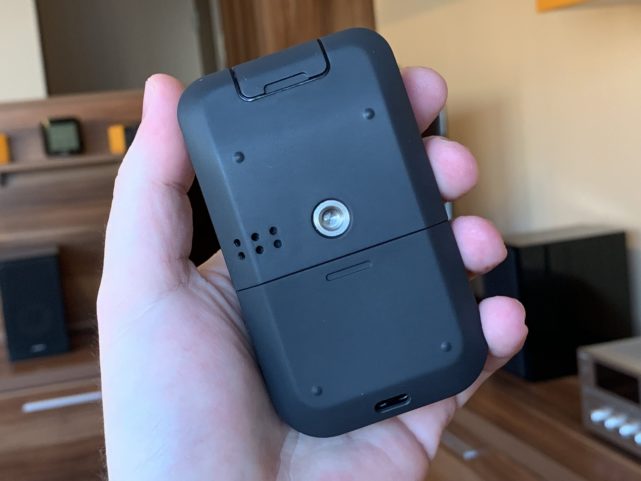 You can also connect bluetooth headphones or speakers from the menu by easily pairing them with the R-07.

Probably our most exciting feature is the Rehearsal mode, which is activated by pressing its corresponding button. This instructs the R-07 to listen to the environment and all of the sounds around it to automatically optimize the recording by adjusting the levels.

Once you’ve done that, all you need to do is hit the Record button and you’re on your way. If you further want to tweak your output, you can select from a number of predefined Scenes, which puts the R-07 in its optimum settings for the selection. These include Music Hi Res, Music CD, Music Long, Loud Live, Loud Practice, Instrument, Vocal, Voice Memo, Field or off.

Roland has a Guide in place to help you start your recording journey, but, from there on, it’s only up to your creativity and the content you record. 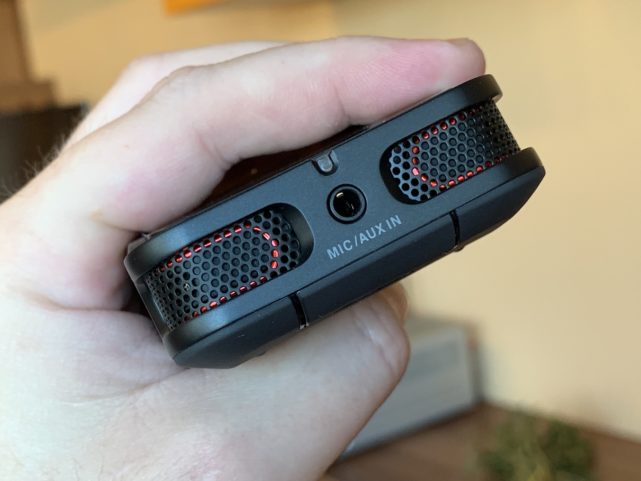 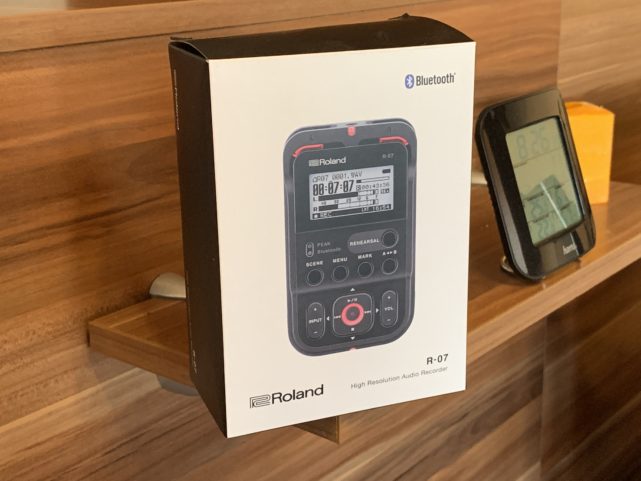 There’s nothing more frustrating than trying to capture a moment with a bad camera and seeing a sub-par photo. The same can be said about audio, regardless of how serious you are about your recordings, or whether you’re doing it professionally, or as a hobby.

The Roland R-07 makes sure you never end up in a situation where you miss a spoken word or a tune. With its small footprint, high-res capabilities, versatility and connectivity features, it is a must have for anyone who is even remotely connected to audio, from musicians to field reporters or voice-over artists. 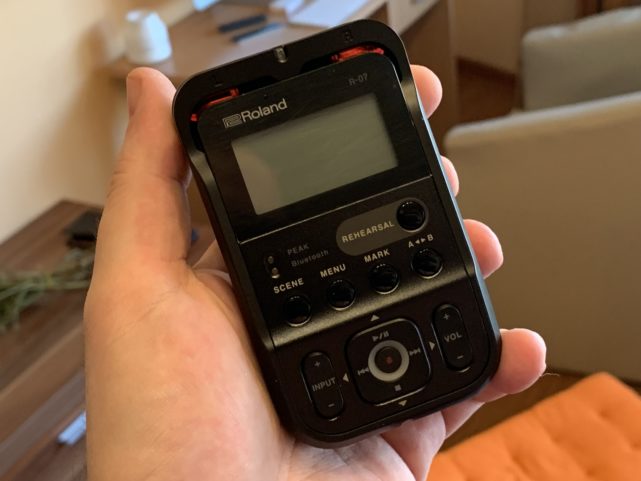 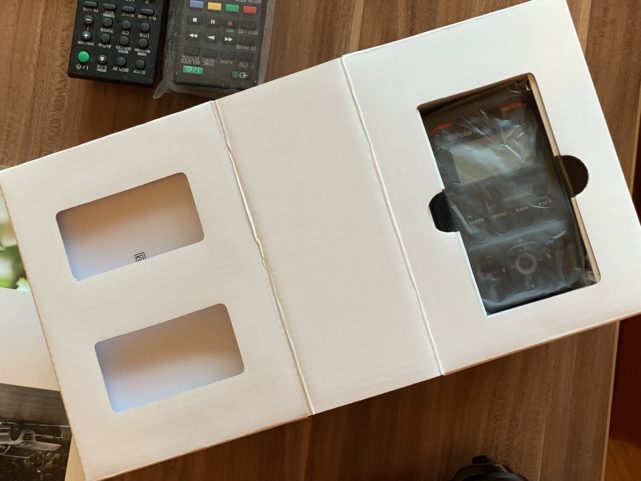 On today’s Pocketnow Daily, we talk about the new Google Pixel 5, Samsung’s possible 150MP camera sensor, a new iPhone 9 Plus and more

Purism’s laptop computers start at $1249, so a mini desktop that starts at $699 but gives you all of the same security features is a welcome addition.

The EU had asked streaming services to consider temporary reductions in streaming quality.

With 10 courses and over 40 hours of training, this is the best-selling 2020 Ultimate…