RIM Has A Mountain To Climb, But They Are Well Equipped

Pocketnow will cover BlackBerry 10 and its devices. In case you need a reason we’ve got more than 79 million. Read to find out what to expect from our future RIM coverage!
Published 29 January 2013, 09:03 EST

Fifty-five percent is what Research in Motion’s US Market share was in 2009 — the number differs depending on the source, but nonetheless above 50% — and if you compare that with the below-five-percent figures (going as low as 1.4%) for December 2012, you’ll immediately recognize a monumental drop. Of course, key players like Android and Apple’s iOS contributed to RIM’s decrease, both platforms stealing the majority of BlackBerry users over time.

Research in Motion’s recent history is quite agitated but the company that once ruled the mobile corporate world, becoming “just another entry” from the market leader it was, might have the recipe for success.

Times have changed and so did the landscape. The new underdog is now Microsoft’s Windows Phone, in a world dominated by Android and Apple’s iOS.

RIM’s BlackBerry devices were the main tool for businesses and their employees to stay connected. Tight integration with Microsoft’s Exchange, as well as services like BES, BIS, BBM, etc, coupled with strong security features, were answers to particular market needs.

However, with a fast adoption of Android and iOS, many businesses have switched platforms – some even went Windows Phone. In this particular status quo, it is safe to assume that RIM’s new BlackBerry devices will not compete with Android and iOS, not even with Windows Phone at the beginning; it will more or less be a fight for survival! 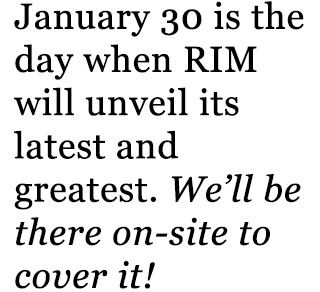 That’s more than 79 million reasons for us to cover Research in Motion’s new BlackBerry 10 OS and devices!

If you’ve ever used a RIM-phone you surely remember the exceptional build quality of the hardware that was complemented with great software features. Of course they became stale over time with the lack of significant updates on both ends but the memory, the recipe for success, is right there, deep in the company’s DNA.

Those who follow our Editors closely on the Podcast as well as on the Live show know that we here at Pocketnow are fans of all things mobile; some of us also have the tendency to have a soft spot for the underdog, let it be webOS, Windows Phone, or, why not, BlackBerry OS.

The fight for the third ecosystem option, right there after Android and IOS, is fierce. Symbian is no longer relevant — with Nokia recently announcing that the 808 PureView was the last Symbian/Nokia OS phone — and Windows Phone didn’t manage to gain the traction Microsoft and its partners, mainly Nokia, were hoping for.

While the clash of the behemoths for domination is also happening as we speak, neither Android nor iOS have that much to lose as Windows Phone or BlackBerry. Existence is at stake here and we’re confident that the war for the third ecosystem will not only be an interesting one, but nevertheless one from which everyone will benefit.

It will not be easy for RIM! It is just fair to mention: some of us have concluded that the company was among the biggest losers of 2012, and, unfortunately, the Canadian firm also made it to the list of this year’s underachiever predictions. Will that stop us from paying attention? Absolutely not!

So, yes, we’ll cover BlackBerry 10, and we’ll gladly do that, starting with the January 30 launch event. We’ll have news, reports, hands-ons, reviews, editorials, comparisons, everything you’re expecting to see and hear from Pocketnow!

Now Apple Stores will start to reopen its doors to customers in Japan, as the country’s Prime Minister has lifted nationwide restrictions