It’s time to revive the Courier

The Microsoft Courier was a tablet that died before its time, and advances in technology make an even stronger case for it today.

I recently resurrected a series of editorials called “This week in mobile history” which offers us a look back at the things that have happened in our mobile past. This is a challenge for me since I was a relative late-comer to the mobile tech space, diving in with the introduction of webOS in 2009. Woulda, shoula, coulda. Anyway. This series of columns allows me to look back and remember the things I’ve seen but also to learn about what I missed, and one thing that I missed was the Microsoft Courier. 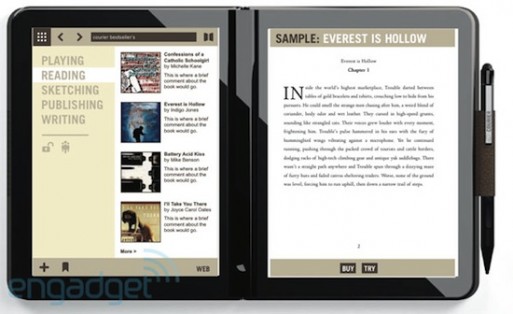 The Microsoft Courier was a dual screened book of a tablet that closed over itself in a sort of clamshell design. This was a product that never got off the ground. It seemed like a pretty cool device, and I’m wondering if it might be time for a revival of sorts?

Tablet technology, screen technology, and pen technology have all evolved at this point to a place where a device like this might become more and more feasible. Devices have gotten light enough and thin enough with small enough bezels that maybe duct taping two of these things together in a hinge is actually not a bad idea. We’re at a place where Microsoft is actually doing relatively well in the tablet space and could use a unique device like this to build on that momentum.

The Courier, in its day, was a device designed to inspire creativity and productivity with its dual screens. Microsoft has been training us to use a device like this for some time now. Windows 8, and its multitasking paradigm is not far off from this type of use – split screen. The software is already basically set up to support this, and more importantly, so are the users ~because~ of this software.

Plus devices that small and light are already being produced on a large scale. Not all tablets out there have to be the Microsoft Surface. Two small and thin tablets joined by a hinge could be a great place to get work done, and solve a lot of other usability issues as well. 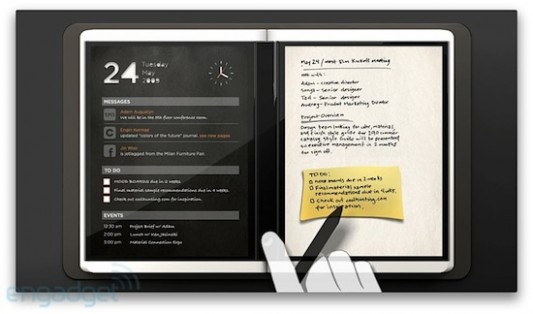 I love using tablets. (Duh. I guess I made a good career choice then huh? Anyway…) But tablets are not without their compromises. I use my iPad frequently for reading, annotating, playing games, etc. But one thing I have a hard time with is finding just the right position to hold the tablet to allow me to do more than one thing on it. And I’m not talking about “play a game while watching Netflix” type of actions. What I’m referring to are the subtler dual-use scenarios.

What’s the best way to read a book and write notes in the margin? If I hold the tablet up to read comfortably, then I have to set it down to draw or type on it. If I’m laying it down to enter a username/password, then I can’t comfortably read my email when I’m done putting in those credentials. I am constantly shifting the position of my tablet to accommodate my actions. This is not a great way to use a tablet from a usability standpoint.

But a Courier-like device might just change that. Input and consumption could be done at the same time with that kind of shape. Book reading could be more natural – or at least what we’re more used to. Also, you wouldn’t need a cheap rubber/metal cover to flip around to protect the screen, nor to help the tablet stand up. Plus a clamshell like design allows the tablet to protect itself.

At the end of the day, I’m not saying this tablet would be God’s gift to humanity. But it’s an intriguing prospect for the mobile space. There would likely be some technological hurdles to overcome, but if Microsoft could do it, it could have a pretty hot device on its hands. I know I personally would be intrigued.

What about you? Do you bemoan the lack of Courier in the market? Were you sad to hear of its demise? Would you ever give a device like this the time of day, assuming the specifications were on par with, say a Microsoft Surface (not Pro) 3 for around the same price point? Sound off below, and lets see if we can lead the charge to bring this product back from the grave! Or at least have a fun conversation about what could have been.

There are several Apple poducts on sale right now at Amazon, and they include the 13-inch MacBook Pro, iPad Pro and more