Research: Alexa is dumber than Siri and Google Assistant

The 800 questions were split in 5 categories (local, commerce, navigation, information, and commands), and the rating system was looking at both how well the query was understood by the assistant, as well as delivery of the correct response.

Google outperforms in information-related questions, Siri handles commands best, and the ranking of utility based on the number of questions answered has remained the same (Google Assistant, Siri, Alexa), but there have been dramatic improvements on each platform and in each category in the few short years that we have been tracking the progress of digital assistants — Loup Ventures

As the table above reveals, Google Assistant is leading the pack in both understanding the queries, as well as delivering the correct answer. Second comes Apple’s Siri, with Alexa on the last spot. While there were categories where Alexa outperformed Siri, there’s one category (commands) in which Google and its Assistant is pushed to second by Apple’s Siri (graphics below).

You can read more about the research by following the source link below. 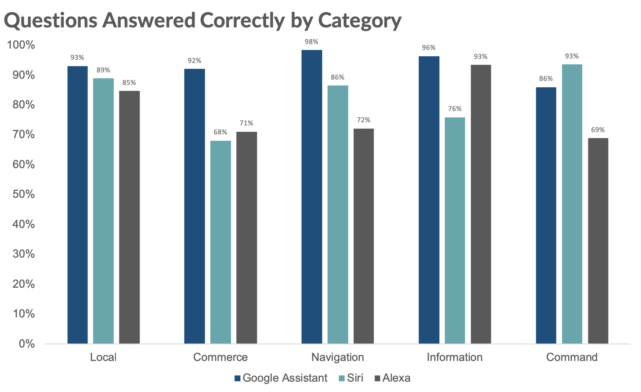 The iPhone 13 Pro comes with several upgrades, and in this article, we show you all of the specifications you need to know about the new Apple iPhone 13 Pro.