Jide, the company behind a desktop interface for Android, has come up with a way not to invest in a dedicated computer for said interface.

The standalone version of Remix OS seems like a pretty good representation of what Android and Chrome OS would be if they merged — a windowed canvas platform for a rich ecosystem of apps. Of course, when it comes from a upstart like Jide, there’s only so much groundswell that can be gathered on an Android fork that requires dedicated hardware and all new information being put into it.

So, the company has decided to take things the Microsoft route and have introduced Remix Singularity: essentially, a Continuum-like link to larger screens for its unique Android UI.

Jide’s dock or dongle can connect to a laptop, desktop or TV monitor and let users connect I/O to the system for full mobile desktop versatility. The experience is powered by the phone with Remix OS on Mobile, but when transferred, the full Remix OS experience is brought on — it includes a smart TV interface mode for binge watchers, by the way.

The play for distributed and scalable computing continues as prior efforts, including Jide’s own, seem pretty blurry in the background. The company faced a setback last year when Google asked it to stop pre-loading the Play Store and other Google services because of potential compatibility issues.

Then there’s the push to get manufacturers selling phones with Singularity support. That hardware will likely be underpowered and not exactly suitable for an optimum experience. With developing markets being the focus, though, this seems beyond the point. 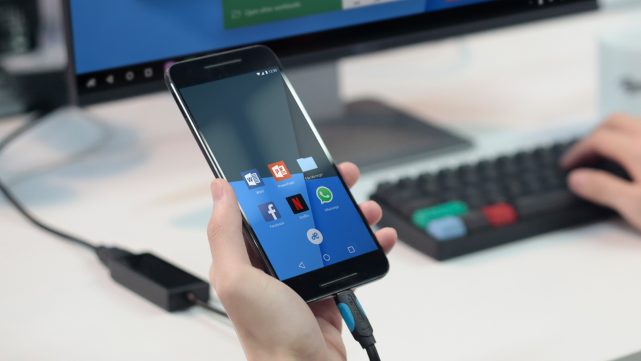 What will really test the Chinese firm is if it can get the right idea of distribution going between internet cafes and workplaces in addition to personal setups to make it available and convenient, not just portable — if you’re targeting a developing market, you can develop the footprint you’ll have in it.

Remix Singularity comes out in the summer.