Got a spare PC lying around and want to check out some multi-window Android action? You’re going to want to download the new Remix OS for PC release.

If you could change one thing about Android, what would it be? Ask a dozen users and you’ll get a dozen different opinions, but odds are good that at least one of them will be thinking about the future of the platform on productivity-oriented tablets, and the promise of what multi-window support (which just might land in Android N) could bring. As it turns out, you don’t have to wait for Google’s next big Android release at all, and you could be rocking a multi-window Android system before the end of the month, with the help of Remix OS.

One of the most interesting things about an annual show like CES is getting to check back in with products you first saw a long time ago and seeing all the ways they’ve matured. Last year we told you about the Remix “ultra-tablet” from Jide Technology, an interesting Surface-ish device running the Android-based Remix OS. One year later, we just visited ShowStoppers at CES 2016 to talk with Jide about what it’s been up to, and the story is much less about the hardware, and all about the Remix OS software. 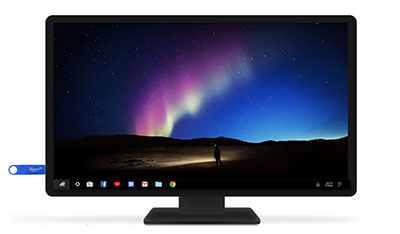 Specifically, we’re about to see the release of a Remix OS build for x86-based PCs (and that includes Macs, too). Got a laptop you’re not using too much these days because you’re so engrossed in Android’s mobile ecosystem? With Remix OS, you can run Android right on that machine. Just load the bootable image and you’ve got a full Android desktop with all the creature comforts: keyboard and mouse support, all that Play Store goodness, and maybe most importantly, a very functional-looking multi-window interface.

Right out of the gate, it won’t work with every PC system – Jide says users can expect maybe 30 to 40 percent compatibility with existing hardware – but that number’s only going to get better as the team gets more and more feedback from users. And if you’ve got some killer PC hardware, you can look forward to performance that threatens to absolutely blow your dedicated Android device away.

If you’re already curious to try it out, you’re in luck, as Jide’s about to let Remix OS for PCs loose on the world first thing next week. It will be free to download and use, so you really don’t have much to lose – and like we said, if you’ve got unused hardware lying around, there are a lot worse things you could do with it.