It’s not like Continuum where you plug in your phone and get a quasi-desktop experience. And then there’s the lack of practicality of an stationary Android-based console. But there’s more than a je ne sais quoi to the Remix Mini that had a whole crowd fund it to over 30 times the original goal pot of $50,000.

Jide, a Chinese company that already has an “ultra-tablet” out, has put up a $70 personal computer on Amazon that runs Android. It’s more low-end proof of concept than anything else, though: there’s a 64-bit quad-core 1.2GHz processor with 2GB of RAM and a paltry 16GB of storage. Kickstarter peeps could get a $20 perk machine that had only 1GB of RAM and 8GB of storage.

But if you’re going to get a real-ish computer, you might as well get an Ethernet port, support for two full-size USBs, microSD expansion up to 128GB and a full-size HDMI out.

Connect a keyboard and mouse and boom, a real-ish computer. 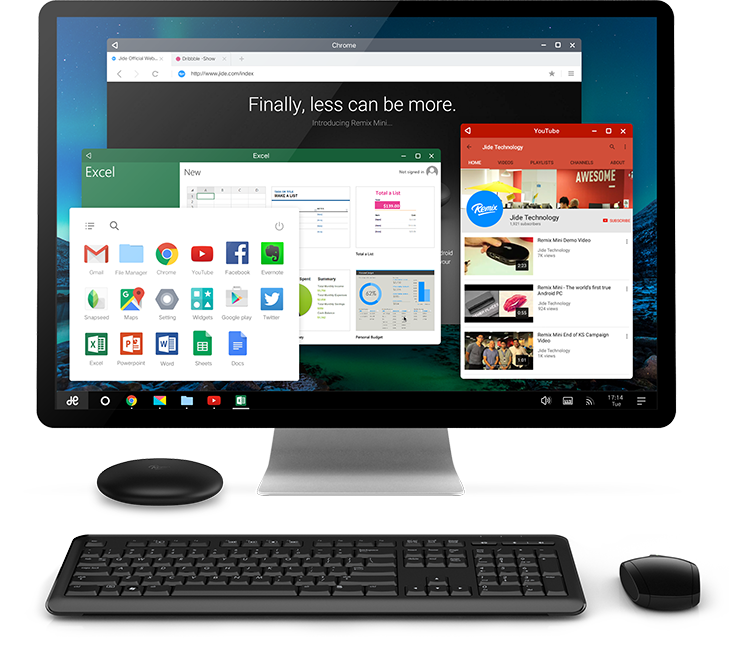 Here’s the rub: on top of Android 5.1, you get Remix OS which brings a conventional desktop experience — a start menu, toolbar and all that — with scalable, windowed applications (a point against Continuum and Split View apps) and vast controller support.

It seems performance doesn’t quite make it up to snuff, though. Keyboard lag is very apparent and getting some games to work with those controllers is easier said than done. And beyond that, you could say the same about some apps with a mouse and keyboard.

So it seems that the Remix Mini might have to be relegated to streaming duty or light work if you do plan on buying it. Then again, there’s always the hope for better hardware down the line.