The Realme 2 is official in India and it brings a huge battery, dual cameras, a notch, and a minuscule price. Check it out!

Just as teased two weeks ago, the Realme 2 is now official, as the company’s second phone. While we knew to expect a notch for the first time on a Realme phone — which is another OPPO child company — we’re glad to be surprised by some of its other specs. The battery, for instance, is a huge 4,230mAh unit with what the company calls AI Power Master. It is basically software monitoring usage and suspending inactive apps to save power.

The display has a notch, and it’s 6.2-inches in diagonal. It has HD+ resolution of 1520 by 720 pixels, protected by Gorilla Glass 3. Powered by the octa-core Snapdragon 450 SoC, it comes in either 3- and 4GB RAM variants, with 32- and 64GB of storage, respectively (both expandable). The Realme 2 features a dual camera system on the back, comprised of a 13MP and a 2MP unit. The front-facer has 8MP, the fingerprint scanner is on the back, and the phone is powered by the Android 8.1 based ColorOS 5.1. Facial unlock option is also available to users.

One of the notable particularities of the Realme 2 is that it brings a triple-slot. Being an Indian phone, it comes with dual-SIM capabilities. However, the triple-slot allows the use of a microSD card in addition to two SIM cards.

Diamond Black, Diamond Red, and Diamond Blue are the Realme 2 colors, and all three of them feature Diamond-cut Design. The pricing model is also attractive with the Realme 2 setting you back, in India, ₹8,990 or ₹10,990 depending on storage. This translates to $130 and $155, roughly. 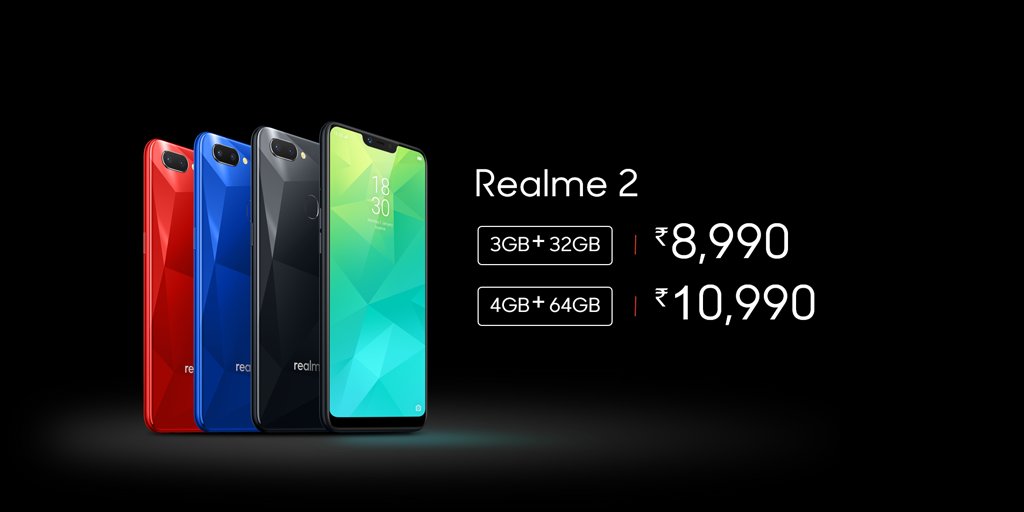