The mysterious first ever Razer Phone is a mystery no more, at least if we choose to trust information listed in the GFXBench database.
Published 13 October 2017, 05:04 EDT

After dabbling in wearables for a couple of years, trying its hand (no pun intended) at both smart bands and smartwatches with little mainstream success, the time has (almost) come for San Francisco-based gaming hardware specialist Razer to release its rookie smartphone effort.

According to information listed in the GFXBench database, which is usually correct albeit occasionally incomplete, the impending 5.7-incher will look to combine a state-of-the-art Snapdragon 835 processor and generous 8GB RAM to deliver plenty of raw power and the best possible multitasking available on mobile devices these days. 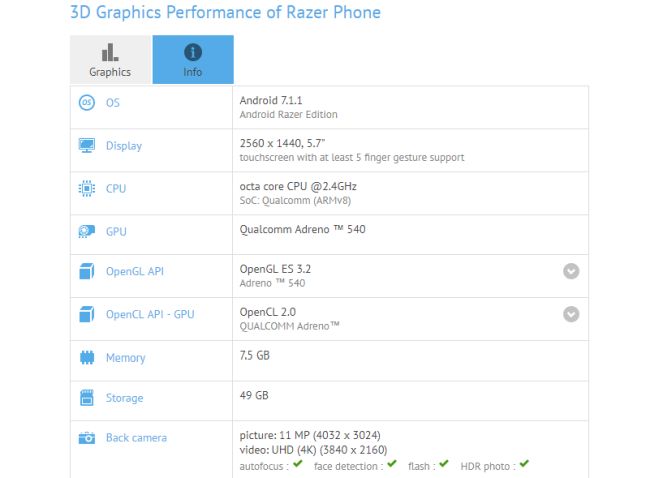 8 gigs of random-access memory is still extremely rare on mainstream phones, and the Asus ZenFone AR, for instance, only packs a Snapdragon 821 SoC. Meanwhile, the OnePlus 5 is available in an 8GB RAM/128GB ROM/SD835 configuration, but the iPhone 7 Plus lookalike sports a humdrum 1920 x 1080 screen resolution.

In contrast, the Razer Phone is expected starting today to come with a Quad HD, aka 2560 x 1440, display. No way to tell a handset’s bezel size by looking at benchmark info, unfortunately, and the 12MP rear-facing camera may or may not be a single-lens affair. There’s also an 8MP selfie shooter in tow, Android 7.1.1 “Razer Edition” software, and 64GB storage that doesn’t sound so hot… until you remember the makers of the cloud-first Netxbit Robin are probably involved in this ambitious project.