Razer Phone 2 after 3 months: gaming ahead of its time? (video)

We’ve really enjoyed our experience with the Razer Phone 2, and we highly recommend it! Check out all the reasons why we think so!

We’ve just spent nearly three months with the Razer Phone 2, and in that time we’ve learned that this phone is actually one of the coolest products we’ve used. The only reason why we held off the review is because if this is marketed as a gaming phone, we needed the accessory that would turn it into the ideal gaming phone, and It’s here.

I’m Jaime Rivera, and I was probably a gamer before many of you were. I grew up with the 8-Bit Nintendo and then the Super Nintendo, and then I became a PC gamer in the times of Unreal Tournament. Sadly once my adult era began with all the travel, it was difficult for me to invest in a console until the Nintendo Switch changed everything. I wish I would’ve said until Smartphones changed everything, because even if mobile gaming has existed for years, I’ve always found it lacking way behind even portable consoles, and also, I despise playing games with a touch screen.

This is why the Razer Phone 2 and the Raiju Mobile controller were so important to me. Mobile controllers on Android weren’t really great before, and we’ll get into that soon. Let me begin by telling you what I like.

The hardware on this phone is just epic. This is like a muscle car, that uses its imposing size and looks to steer heads. It’s large and it’s in charge. From the black finish, to its boxy design, to its aluminum trim, to its Chroma-based razer logo at the back, this phone is stunning. Sure the sharp corners aren’t pants-friendly or even ergonomic in the hand, but the great weight distribution has made me not care.

There are key essentials to make this phone easier to game with, like the volume buttons placed in the center to avoid accidental presses. And even if some people complain about the placement of the fingerprint scanner, I like it, but I’m right handed, so I can’t speak for everyone. 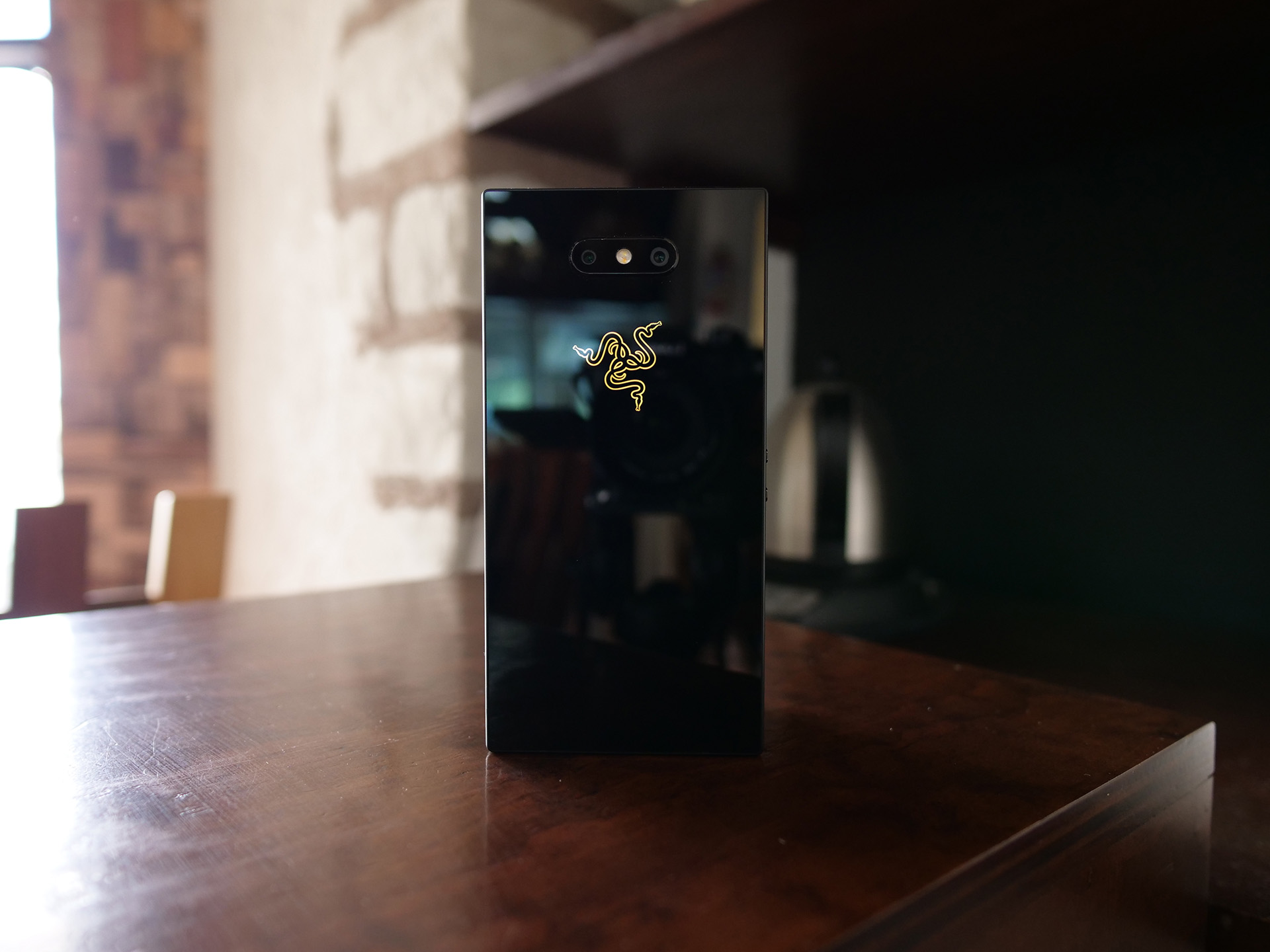 This is also one of the most advanced LCDs on a phone. At 5.7inches, Quad HD Resolution and 120 Hz in refresh rate, it is a true sight to see. It’s no longer the dim panel of its predecessor, now at 645 nits. Regardless of it being an LCD, colors are vibrant. This is one of the displays I’ve enjoyed using most. And don’t even get me started about these speakers, which are now IP67 water resistant as the rest of the chassis and the loudest and richest I’ve heard on a phone. Yes, there is also Dolby ATMOS support. (Audio clip)..

I wish there was a headphone jack, but these Razer Hamer Head noise cancelling headphones are powered by USB-C and I’d recommend you listen in. 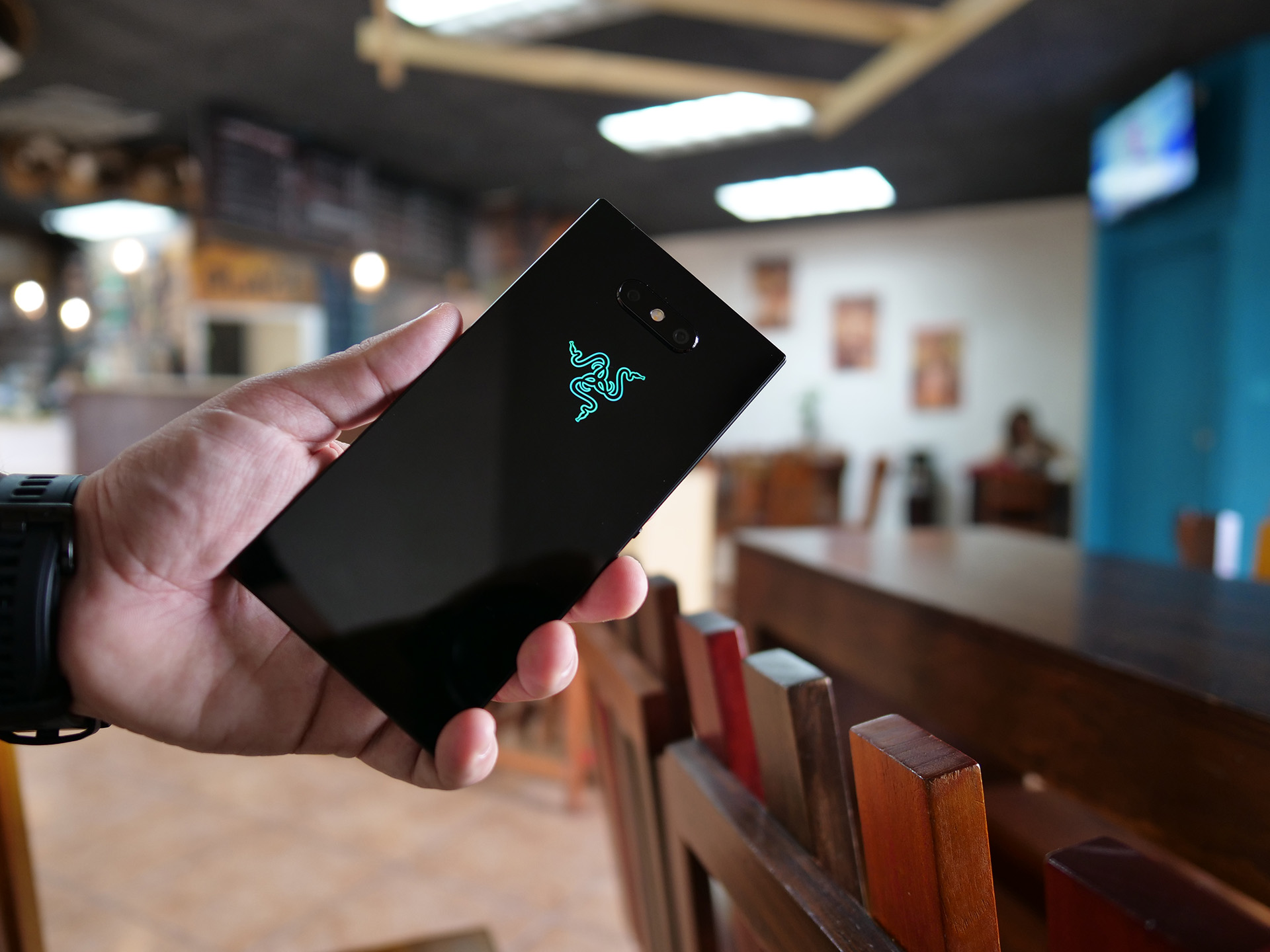 And in gaming fashion, these internals are solid thanks to a Qualcomm Snapdragon 845, 8GB of RAM, 64GB of expendable storage, a 4,000mAh battery, Quick Charge 4+ support, QI wireless charging, and one of the coolest wireless charger accessories in the market.

This nails two of the things that I care about most, which are performance and battery life. I have yet to see this phone bog down for anything, heat up for anything, and I have also yet to find a phone with better battery life. If I were to know that I’d need to spend two days without a charger, this would be my phone.

So now let’s move into where I’m mixed with this phone. I love that there’s Nova Prime installed by default, and that you have so much customization options, and that this user interface feels buttery smooth and looks futuristic given the Razer skin. I just can’t understand why it’s still running Android Oreo three months later.

And second, let’s talk about gaming and the state of Android for gaming phones. See, I thought I’d already be playing Fortnite and PubG on my phone with this controller, rendering my Switch useless to me… But no… And the reason why I’m mixed is because this is not Razer’s fault. Let me just make that clear.

This is an Android problem, and it’s also a games problem. Not all games support mobile controllers. Those that do rarely do so automatically. Obviously there are games that are best played without a controller, and for those this phone excels. And sure, I could also just stop complaining and play Fortnite on the screen, but anyone who takes this game seriously knows that a controller or a keyboard is a must. 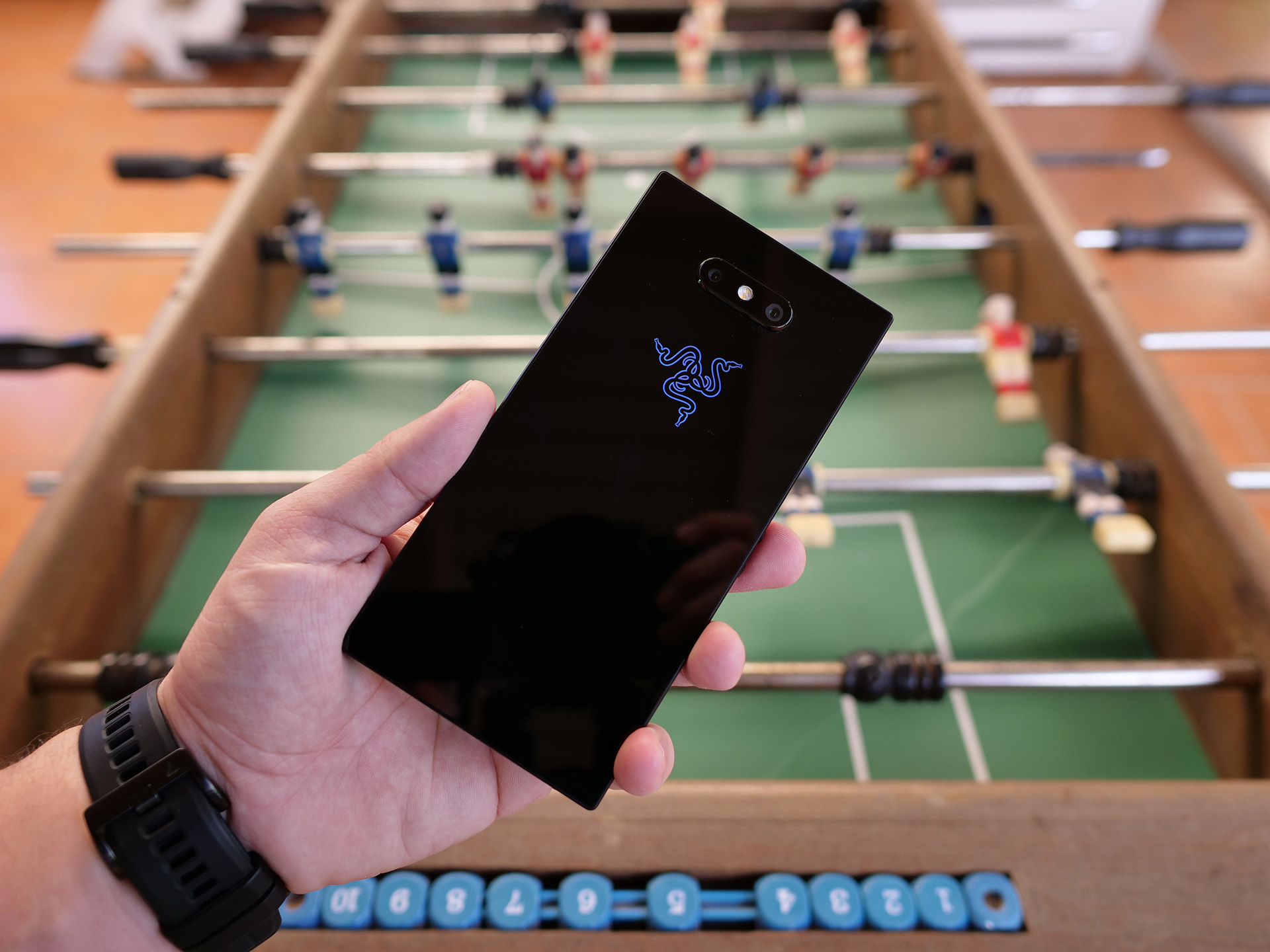 There is a full list of games that are supported by the Raiju Mobile Controller, and I do hope the list grows because in Razer fashion, this controller feels fantastic. The tactility of the buttons and the arrangement is just fantastic.

And last but not least, there’s the Camera. The reason why I’m mixed is because I’m happy to report that this has been a work in progress. Since launch I’ve received two software updates that have improved the experience dramatically. As such photos during the day are vibrant, with good colors, saturation and detail – all par for the course with most devices today.

Low light has seen some significant improvements, and I mean major. What was before a mess full of grain in previous builds is well sharpened and decent if you can keep your hand still.

To conclude, not sure if you noticed but I didn’t stop by a third segment to give you things I don’t like about this phone. There actually aren’t any, and that’s a first for me. This is not a perfect product by any means, but if you notice, the things I’m mixed about are all fixable with software. The company has proven that it can improve its camera performance over time, and then once it gets Android Pie, my complaints about it lagging behind in updates are gone. 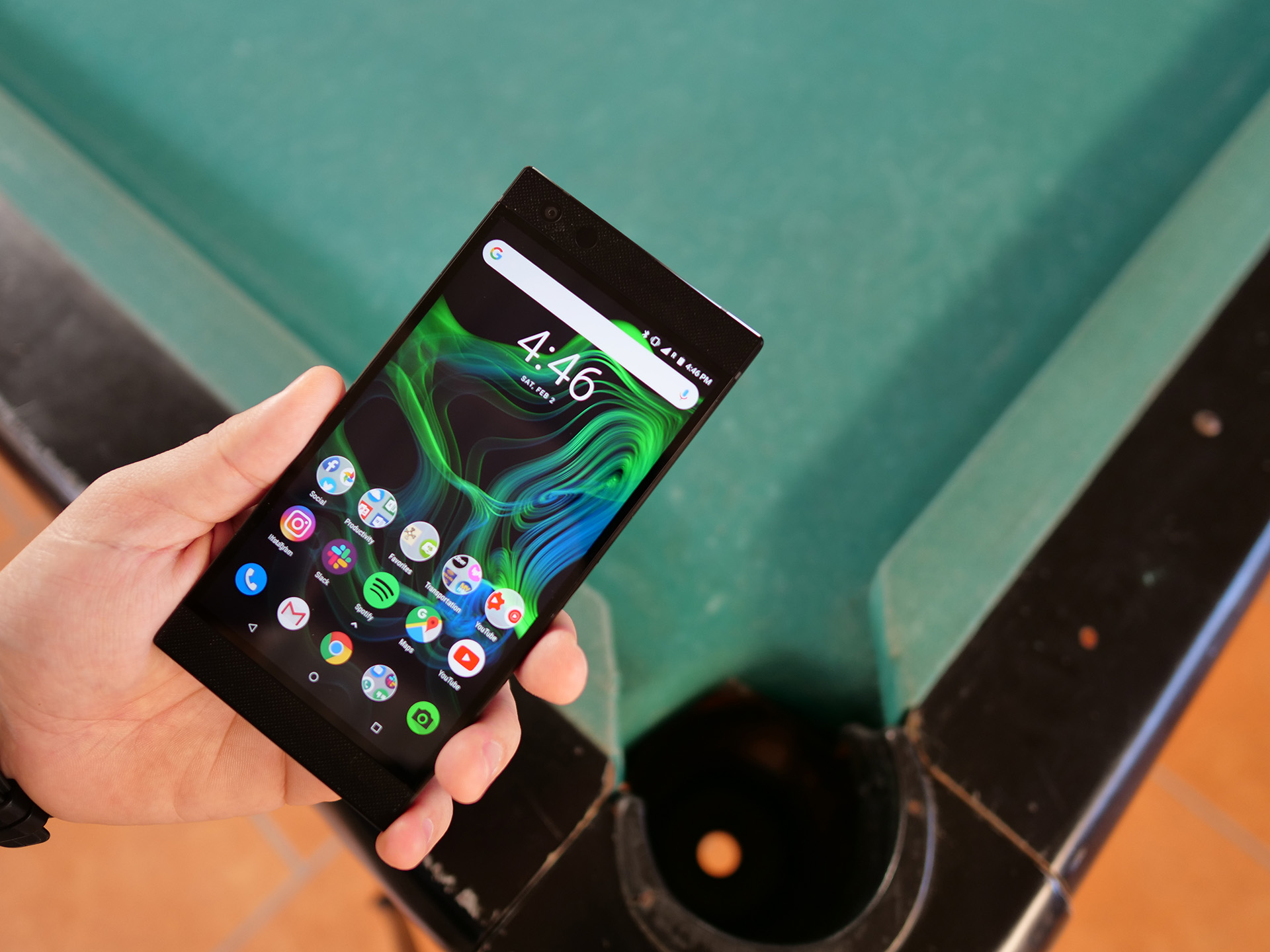 The last premise left is the state of Android for Gamers. The original Razer Phone created the category, but even today with the Razer Phone 2, I feel the idea is ahead of its time. We need better mobile games, and we need for Android to embrace better ways to control these games if they want to compete against a more robust player like the new Nintendo, which has taken the market by storm.

I do feel this phone is a step in the right direction. The original Razer Phone created a market that now ASUS, Nubia and others are following. This Razer Phone 2 only solidifies the belief in the concept, and now we just need Google and developers to step it up.

While that happens, I have to say that this phone doesn’t need to be a gaming phone to be a great smartphone. Even if you were to scratch the gaming phone concept, and then look at all you get for its price, it’s really hard to beat the overall package. I’ve really enjoyed my experience with the Razer Phone 2, and I do highly recommend it.