The latest LTE-enabled Windows machine comes with the latest Qualcomm chipset made for Windows machines. Find out what the Yoga C630 is all about.
Published 30 August 2018, 14:30 EDT

The Miix 630 was Lenovo’s Windows machine with a Qualcomm Snapdragon chipset inside of it. The Snapdragon 835 with the Snapdragon X20 modem brought in the term “Always Connected PC” to laptops and convertible tablets with non-stop access to LTE.

Now at IFA 2018, we’ve got a big update: the Snapdragon 850 will officially launch with the Lenovo Yoga C630 WOS running Windows 10 S.

The Snapdragon 850 — introduced in June, but was not utilized until now — uses the same X20 modem for theoretical downlink of 1.2Gbps, but claims a 30 percent raw performance jump from the 835. Battery-wise, the C630 WOS has been benchmarked for at least 25 hours of video playback, besting previous devices by roughly 10 to 20 percent. And it’s all cooled without a fan. 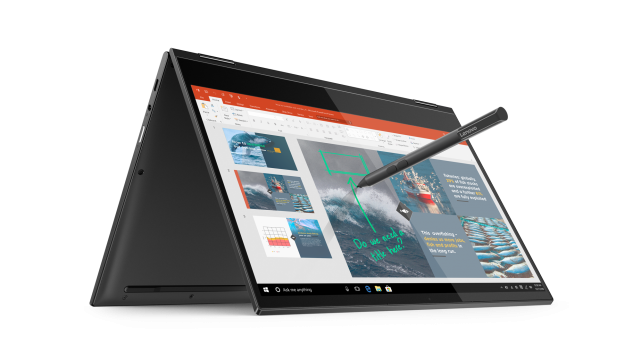 As for the device itself, the detachable device brings in a 13.3-inch full HD touch display. Users can pick up a Lenovo Pen at additional cost to use Windows Ink applications. All together, it’s 12.5mm thick and weighs just 1.2kg — enough room for 2 USB 3.0 ports via Type-C (both support USB Power Delivery charging while the right port is DisplayPort compatible), a headphone jack, fingerprint reader and a SIM card slot.

There’s LPDDR4X RAM options of 4GB and 8GB tied to UFS 2.1 disks of 128GB or 256GB, respectively. The Lenovo Yoga C630 WOS will be available in November starting from €999 across Europe, the Middle East and Asia.

The latest iPad mini information claims that the new model will not feature a mini-LED display, as previous rumors suggested

The Kompanio 1300T chip brings premium performance to tablets with support for 5G,…

We’ve collected some of the best Honor phones that you can buy today. Some of them even…

We keep getting amazing deals from Amazon.com starting with the most powerful 13-inch…